In this section we will go over a few of the examples from our Qwiic Button Arduino Library. Here is a full list of all the examples included in the library:

The code for Example1_PrintButtonStatus connects the Qwiic Button to the I2C bus and prints the status of the button (pressed or not pressed) to the Serial Monitor.

Example3_PulseWhenPressed connects the Qwiic Button to the I2C bus and runs the Button LED through a configured sequence when the button is pressed. The code configures the LED settings for brightness, cycleTime and offTime to pulse the Button LED while it is pressed. Try playing around with these settings to change the behavior of the LED.

Example4_QueueUsage demonstrates how to call, check, and alter the FIFO Queue for a button press and button click. The code will check both the Pressed and Clicked queues and, if the queue is not empty, prints over serial the time since the first press (since the queue was last cleared) and the time since the last press. Entering "P" in the serial monitor will "pop" the Pressed Queue to return the oldest value stored in the queue and then remove it. Entering "C" will perform the same action for the Clicked Queue.

Example5_ChangeI2CAddress checks to initialize the Qwiic Button on the I2C bus. If the device ID matches what is expected (0x6F by default), it then will print some helpful information for changing the I2C address and prompt you for an input to change the address. Once a new device ID is input and is valid, the code writes the new I2C address to EEPROM on the ATtiny84 and prints out a success note along with the new device ID. If the entered address is invalid or for some reason the write fails, the code will print out an error detailing what failed.

If the device ID does not match what is expected, it runs a scan for devices on the bus and prints out the ID of any attached device. Make sure to set up the Serial Monitor for the correct baud rate and enable both Newline and Carriage Return. Also, do not enter the "0x" prefix. For example, you want to set the address to "0x5B", type in "5B" and press enter. The gif below shows the serial printout of a successful initialization and device address change to 0x5B:

Changing I2C Address Again: If you need to change the I2C address of your Qwiic button after altering it using the above example, you will need to modify the button.begin(); function to include the alternate address. For example, if the new address is 0x5B, your begin function should look like this: button.begin(0x5B);

Example8_ExtInterrupt demonstrates how to use the external interrupt pin to trigger an event on an attached microcontroller. You will want to solder to the INT pin and connect it to an interrupt-capable pin. If you just need to quickly prototype a circuit using the INT pin on the Qwiic Button, you can connect to it using something like these IC Hooks. The photo below demonstrates how to use the IC Hook for a temporary connection.

The example attaches an interrupt to D2 by default. This works fine for a RedBoard Qwiic or Arduino Uno but may not work on other Arduinos. The Arduino attachInterrupt Reference Page will have a list of interrupt-capable pins for common Arduinos. Check that table or, if your chosen Arduino microcontroller is not on that list, check the documentation for your specific microcontroller and adjust the int interruptPin = 2; call to the appropriate I/O pin. 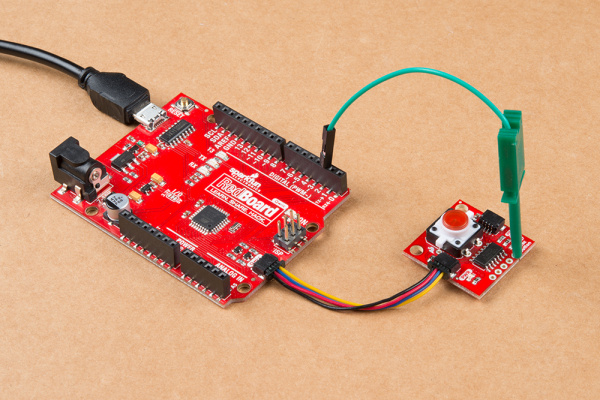