If you are using the smôl ARTIC R2 to develop your own wildlife tracker, you will of course be very interested in how much current the board draws.

The fantastic Otii Arc Power Analyzer has allowed us to capture the ARTIC R2's exact peak transmit current draw at all four gain settings, and to study the average current drawn when the chip is idle. We've used this data to help optimize the code in this example to extend the battery life as much as possible when using the smôl ARTIC R2 with the smôl ESP32 Processor Board, smôl ZOE-M8Q GNSS Board and the smôl Power Board LiPo.

The picture below shows the current draw captured by Otii Arc for a complete transmit cycle using this example. The gain here is set to maximum. 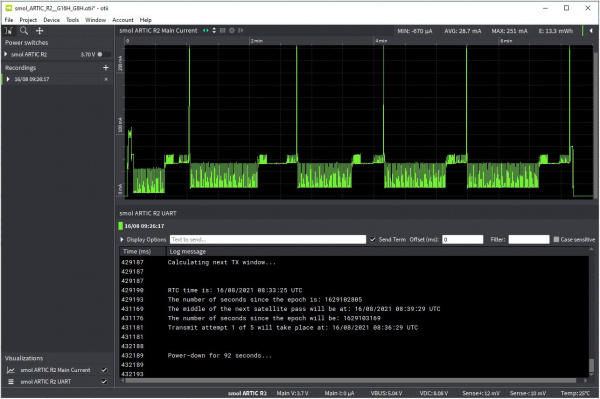 At the start of the transmit cycle, the ESP32 Processor Board is woken up by the Power Board. It turns on the ZOE-M8Q GNSS board and waits for a fix. The current draw here is approximately 100mA for ~10 seconds.

Once the ESP32 has a location fix, it can calculate the time of the next ARGOS satellite pass. The power board woke the ESP32 up 1 minute before the start of the next pass, so the ESP32 goes in and out of light sleep for the next ~30 seconds.

The ARTIC R2 is powered on at the 40 second mark and the first of five transmits takes place just after the one minute mark.

The code example transmits five times on each satellite pass. The gap between the transmits is 90 seconds with a mandatory ±10% jitter. In between, you can see the ESP32 going in and out of light sleep with the ARTIC R2 being powered up 20-30 seconds before the next transmit is due.

The phenomenal data captured by Otii Arc allows us to zoom right in on the transmit itself and capture the true maximum current draw: 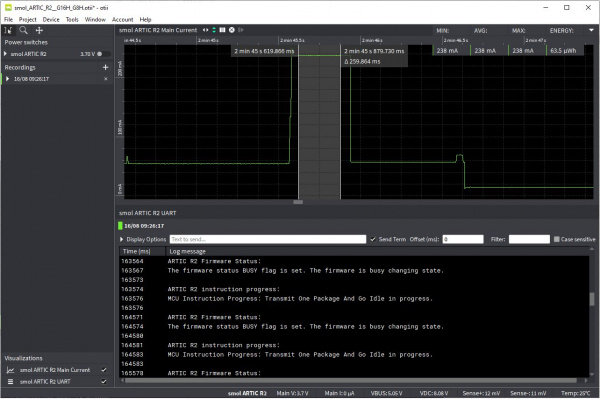 It's then child's play to extract the data we need!

Please note: the Peak TX Current in this table is the total peak current drawn by the ESP32 + ARTIC R2 + Power Amplifier during the actual transmit

Otii Arc lets us collect the other data we need:

We can then use this data to predict the battery life based on the transmit power and the number of transmissions per day. The satellite pass-prediction code in our Arduino Library can calculate the timing of the satellite passes with the highest elevation each day to maximize the chance of the transmission being received. Transmitting five times per day at maximum power, we could expect a 2000mAh battery to last approximately 530 days! Even the modest 400mAh battery pictured below should last for more than 100 days. 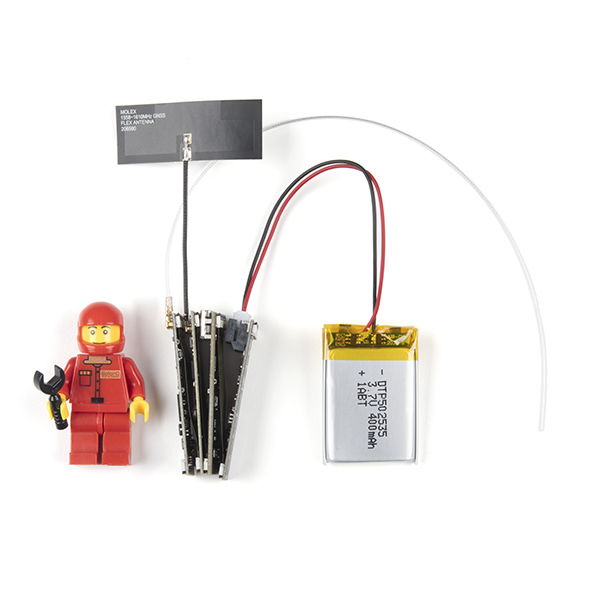