An electric imp hug! Provides an overview of the imp card and breakout. Both hardware and firmware subjects are covered.

The electric imp can do most anything an Arduino or similar microcontroller can. It's got analog-to-digital converters, PWM, SPI, I2C, UARTs, and it even has digital-to-analog converters. In this first snippet of example code, we'll show off the basics of I/O control -- digital and anlog input/output. 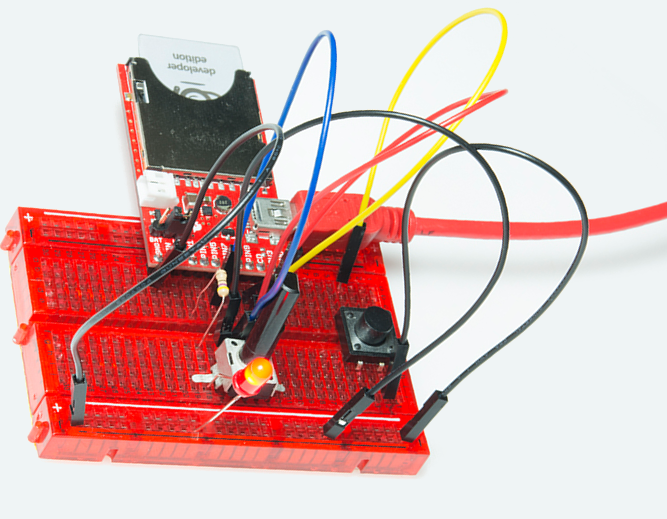 After sending the BlinkUp and commissioning your imp, it should show up in your planner as a lone, blue rectangle. The word "Blank" will appear in the box. The box's name will reflect the code that the imp is running. 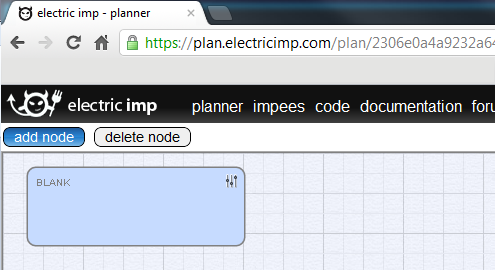 To upload code to the imp, you need to click the "slider" icon in the top-right of the blue box, and select the code you wish to stick on there. I guess that means we need some code then?! 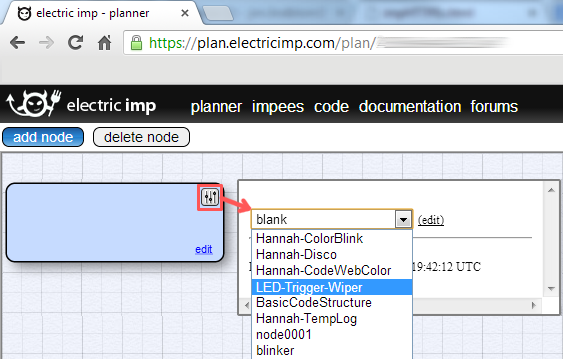 The setup for this example code requires three unique components: an LED, potentiometer, and a button (plus a current-limiting resistor for the LED). Here's a fritzing diagram and schematic (click to see it bigger) for our circuit:

Make sure the imp is getting power. USB is usually the quickest/easiest way to apply power to the breakout board, but you'll need to set the jumper accordingly. 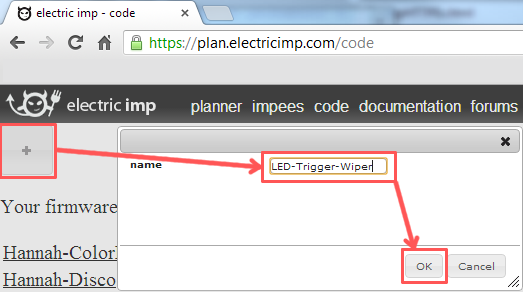 This'll open up a blank piece of code. Copy and paste everything from the below box, into your code window and save.

This'll save a copy to your account on electric imp's server. You'll now always be able to open it up, view it, and modify it by clicking on the link in the "code" tab.

The code creates a simple adjustable-brightness LED controller. The brightness of the LED is adjusted by turning the potentiometer. Pressing the button will turn the LED on and off.

If you're only used to working with Arduino sketches, this code may make very little sense, electric imp programs have a very different "flow" to them. Begin by looking at the 5 lines of code at the bottom of the program (under the "Setup Stuff" header). This is actually where our imp starts when it begins to run it's code. Everything above is simply a function definition.

Most of this code makes heavy use of the imp's pin class, which handles a lot of the I/O control. If you're used to using Arduino GPIO's, the imp's API isn't too different. You have to set the pin up as either an input or output, analog or digital. Then write or read to the pin accordingly.

At the end of the setup, we make a call to the loop() function, which is defined above. loop() is simple, it checks a global variable named ledState. If ledState is 1, we read the potentiometer voltage, and adjust the brightness of our LED accordingly. The special sauce making loop actually loop is the last line of code in the function: imp.wakeup(0.01, loop). The imp.wakeup function puts the imp to sleep, but sets a timer. When the timer goes off, the loop() function is called from the beginning. In this case we set the timer to 0.01 seconds (10ms), so loop() should run about 100 times a second. This is really the only way to make the electric imp "loop" like an Arduino might.

The ledState variable is flip-flopped in the pin9changed() function. This is like an interrupt. It's called whenever the state of pin 9 changes -- if it goes from high to low, or low to high. When setting up pin 9 as a digital input, we added this function as the one to be called when the state change occurred.

Check out the comments in the code for a more in-depth overview of each function call. Or, for more information, check out electric imp's API reference.

The next example will make use of the imp's greatest feature...it's web connectivity.