Before we can start to wire our robot, we'll need to assemble the mechanical parts. Luckily, this robot is about as simple as it gets!

Empty out the box in which your kit came. That box is going to become the body for our robot. The included breadboard has a peel-and-stick backing, so let's start by sticking that to the topside of the box, along the hinged side of the box, near the center. In order to connect the rest of the parts, you'll need the strip of double-sided tape that came in your kit. Cut off about an inch of that tape, and use it to stick down the battery pack just below the breadboard, as pictured in the diagram below. Don't worry about the parts stuck into the breadboard just yet. We'll get to that after the mechanical portion is assembled. 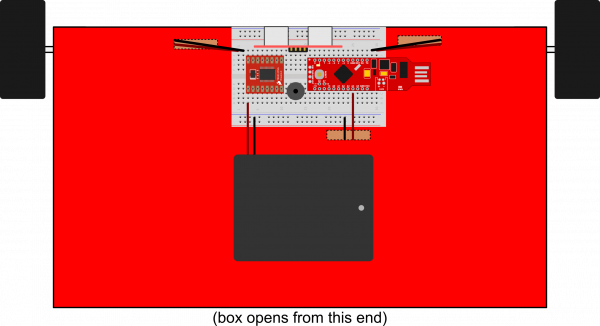 As you can see, there are a few places where it is suggested you cut a hole into the box so wires can be fed through. One hole that you can't see is underneath the battery case so you can access the power switch on the underside. Otherwise, you could just turn it to "ON" and leave it there. Two other such holes are found on the bottom of the box where we're going to attach the motors.

If you look at the hobby motors in the kit, you'll notice that there is an axle running through them so that a wheel can be pressed onto either side. You'll also notice that the wires are gathered on one side of the motor. It'll be easiest to wire the motors if you make sure that they're attached with the wires pointing in toward the middle of the box. Use the remaining length of double-sided tape to mount the motors on the bottom side, front corners of the box. Check out the diagram below for an idea of how it should look.

Heads Up! One side of the motor has a sticker on it. Make sure to remove that sticker before using double-sided tape to mount the motor because this sticker doesn't have as much grip as the tape included in your kit. 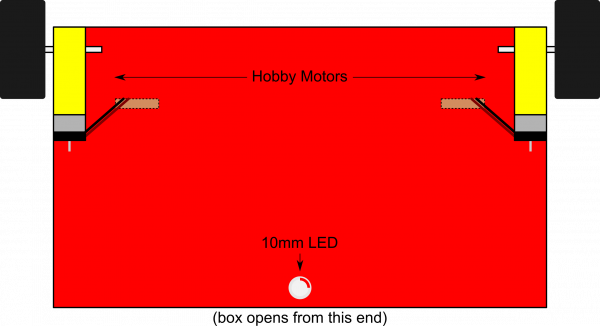 As there are only two motors on this robot, we'll need to add something on the backside to keep it from just dragging around. In this case, we're going to use a 10mm LED as a caster. Not only is this a nice, cheap way to keep your robot's backside off the ground, but it'll also allow us to add cool lighting effects! You shouldn't need to glue the LED into place; just poke it through the cardboard and splay the legs out as pictured below. Later, we'll solder a few wires to this LED, and that should hold it in place.

Once you have all the essentials taped into place, you can add some fun decoration to give your robot a little personality. Below, you can see that I've glued down a pair of googly eyes and drawn on a derpy smile with a magic marker. 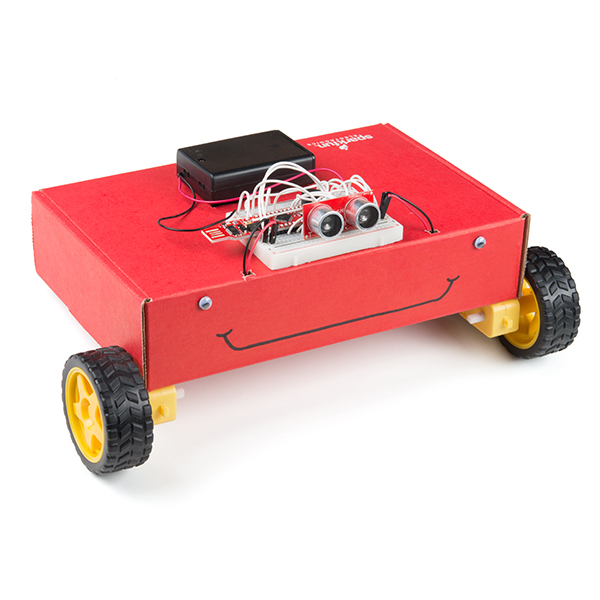