Before we get into the hookup it's probably a good idea to familiarize ourselves with EEPROM and the history of ROM in general. That said, if you don't nerd-out on computer history it's probably safe to skip that section.

Read-Only Memory (ROM) is a type of computer memory which, generally speaking, is only programmed once (or very occasionally) and then gets read from the rest of the time. This is because it's very slow — or impossible — to write new data to ROM. The trade-off for very slow write times — traditionally — is that it's also non-volatile meaning that the data doesn't go away when power is removed from the device. This makes it ideal for things like firmware which need to be "remembered" by the computer, but never actually change. The BIOS in your PC is stored on a form of ROM.

A Brief History of ROM

Early "Stored-Program" type computers — such as desk calculators and keyboard interpreters — began using ROM in the form of Diode Matrix ROM. This was memory made up of discrete semiconductor diodes placed on a specially organized PCB. This gave way to Mask ROM with the advent of integrated circuits. Mask ROM was a lot like Diode Matrix ROM only it was implemented on a much smaller scale. This meant, however, that you couldn't just move a couple of diodes around with a soldering iron and reprogram it. Mask ROM had to be programmed by the manufacturer and was thereafter not alterable.

Unfortunately, Mask ROM was expensive and took a long time to produce because each new program required a brand new device to be manufactured by a foundry. In 1956, however, this problem was solved with the invention of PROM (Programmable ROM) which allowed developers to program the chips themselves. That meant manufacturers could produce millions of the same unprogrammed device which made it cheaper and more practical. PROM, however, could only be written to once using a high-voltage programming device. After a PROM device was programmed, there was no way to return the device to its unprogrammed state. 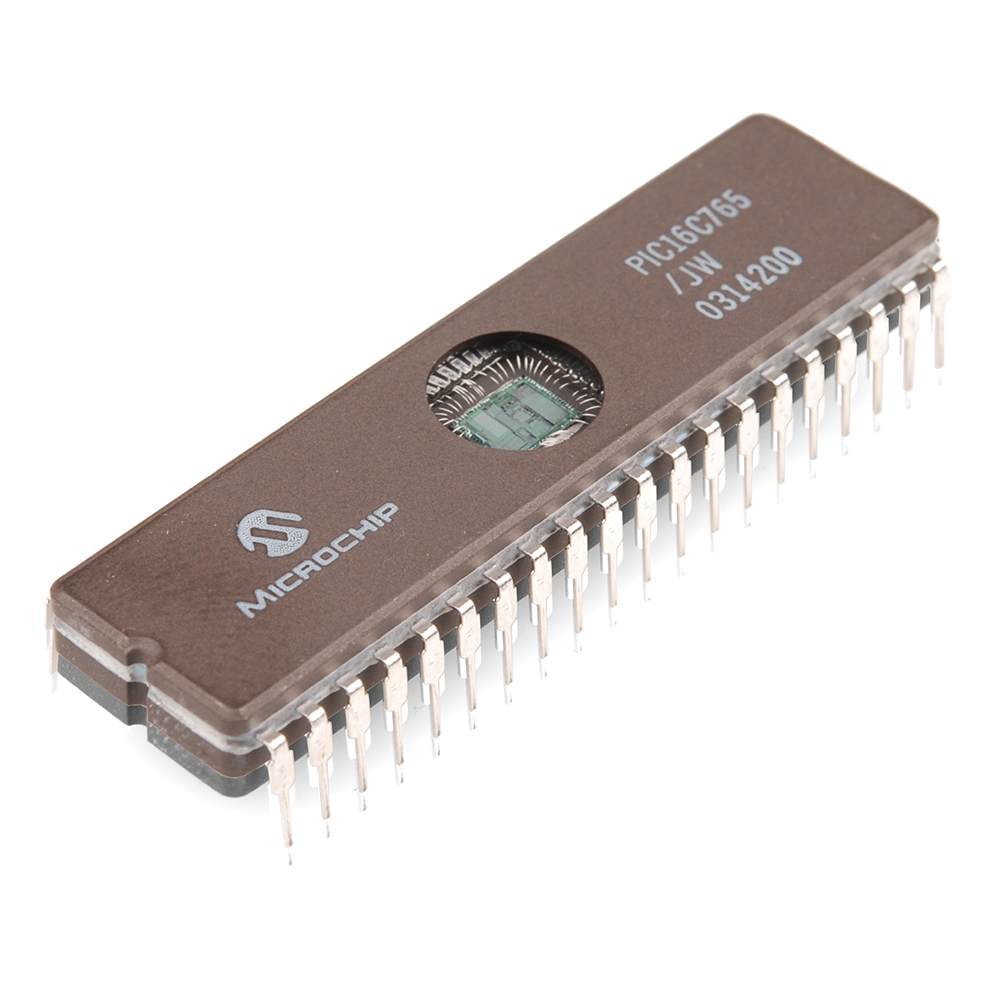 A UV Erasable Microcontroller. The window gives it away.

This changed in 1971 with the invention of EPROM (Erasable Programmable ROM) which — besides adding another letter to the acronym — brought with it the ability to erase the device and return it to a "blank" state using a strong UV light source. That's right, you had to shine a bright light on the IC to reprogram it, how cool is that? Well, it turns out it's pretty cool unless you're a developer working on firmware in which case you'd really like to be able to reprogram the device using electrical signals. This finally became a reality in 1983 with the development of EEPROM (Electrically Erasable Programmable ROM) and with that, we arrive at the current day unwieldy acronym.

There are two major drawbacks to EEPROM as a method of data storage. In most applications the pros outweigh the cons, but you should be aware of them before incorporating EEPROM into your next design.

First of all, the technology that makes EEPROM work also limits the number of times that it can be re-written. This has to do with electrons becoming trapped in the transistors that make up the ROM and building up until the charge difference between a "1" and a "0" is unrecognizable. But don't worry, most EEPROMs have a maximum re-write number of 1 million or more. As long as you're not continuously writing to the EERPROM it's unlikely you'll hit this maximum.

Secondly, EEPROM will not be erased if you remove power from it, but it won't hold onto your data indefinitely. Electrons can drift out of the transistors and through the insulator, effectively erasing the EEPROM over time. That said, this usually occurs over the course of years (although it can be accelerated by heat). Most manufacturers say that your data is safe on EEPROM for 10 years or more at room temperature.

And there's one more thing you should keep in mind when selecting an EEPROM device for your project. EEPROM capacity is measured in bits and not bytes. A 256K EEPROM will hold 256Kbits of data, in other words, just 32KB.