Sometimes you just need a volume knob. The Qwiic Twist is a digital RGB encoder, also known as a continuously rotating knob that is read and controlled over I2C. 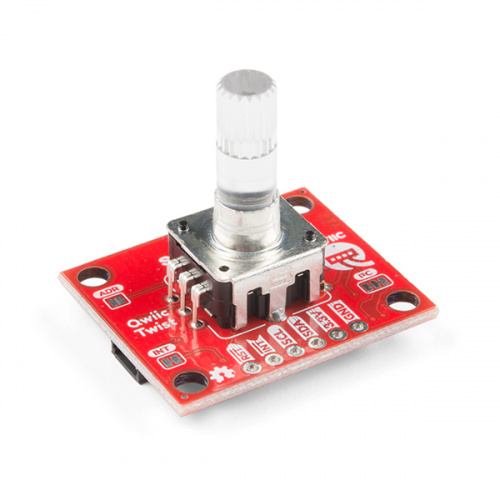 The SparkFun Qwiic Twist is a digital RGB rotary encoder breakout that is also able to connect to our Qwiic Connect System.

What does that mean? Send the command twist.getCount() and you’ll get the number of steps the user has twisted the knob. For example, 312 or -23 depending on the direction and amount the user and turned the knob. The Twist takes care of all the various interrupts, switches, PWM'ing of LEDs and presents all those features over an easy-to-use I2C interface. The Qwiic Twist was designed to get rid of the large mass of wires that are needed to implement an RGB encoder in a breadboard. Now you can get encoder position with something as twist.getCount(); and your microcontroller can keep focused on other more important tasks.

The Qwiic Twist has an indent type encoder which gives the user a great 'clicky' feel as they turn. The Qwiic Twist also has an RGB LED and a built-in button. We’ve written an Arduino library to make controlling these features as easy as:

And finally, the I2C address of Qwiic Twist is software configurable which means you can hookup over 100 Twists on a single I2C bus! 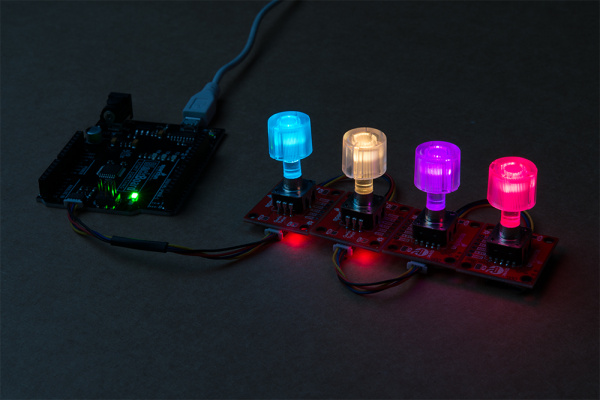 $6.95
4
Favorited Favorite 29
Wish List
Note: Originally, a BlackBoard was used in the tutorial. If you are looking to reduce the cost and avoid soldering headers to the Qwiic shield, try taking a look at the RedBoard Qwiic. It is essentially a RedBoard with Qwiic connector.

You will also need a Qwiic cable to connect the shield to your Twist, choose a length that suits your needs. The Qwiic to breadboard cable is good if you want to easily plug the Qwiic Twist into a 3.3V platform such as Teensy.

The Qwiic Twist is designed to be easily connected to a Qwiic bus without soldering. But if you choose to connect to the I2C pins directly you may need a soldering iron, solder, and general soldering accessories.

Get started with our Qwiic ecosystem with the Qwiic shield for Arduino or Photon.
Favorited Favorite 4

Additionally, we’ve got a great video on how the inner workings of encoders work and why they’re important.

The RGB encoder is a 24 indent encoder. You’ll feel 24 clicks when turning one 360 degree rotation. 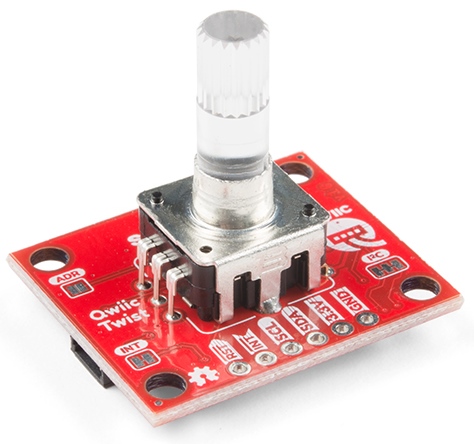 The encoder works best with the Clear Plastic Knob but is compatible with any knob with a 6mm knurled hole. The encoder output is filtered through a series of resistors, capacitors, and error checked in software to be sure the accurate number of ticks is being output. 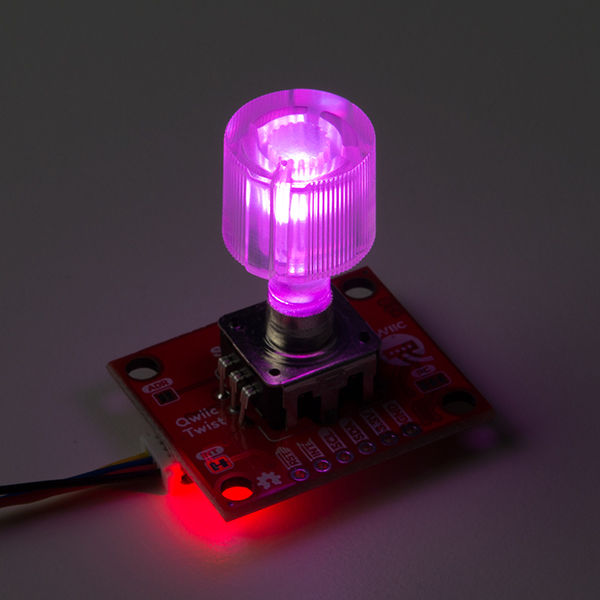 The encoder has an RGB LED built into it. To get the full light effect we recommend a clear knob but depending on your setup you may also be able to get a ‘backlit’ effect with an opaque knob. The RGB LEDs are pulse-width-modulated and controlled via software (and backed by non-volatile memory) so you can tell the Qwiic Twist to go to any color you want and it will be that color now and even after the Twist is power cycled (it remembers the last color setting).

The encoder has a built-in momentary button. This is useful for selecting menu items and getting general feedback from the user. 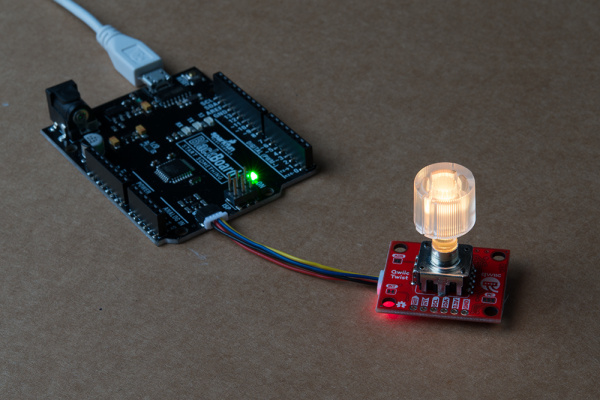 The Qwiic Twist is best used with the Qwiic system. Simply plug a Qwiic Cable into the Twist and start talking to it. 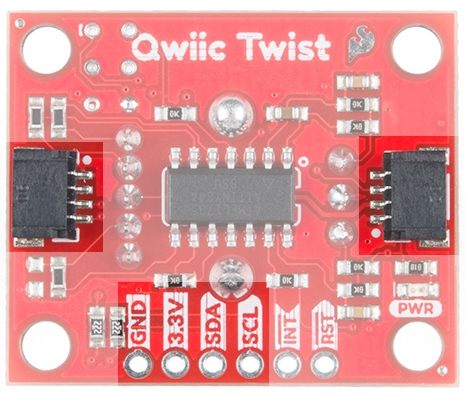 Alternatively you can solder to the I2C pins on the board.

Heads Up! The Qwiic Twist is designed to operate at 3.3V so please don’t drive it at 5V. Your I2C pins, however, can be 5V logic.

The reset pin is an active low input. When pulled low Qwiic Twist will be held in reset. 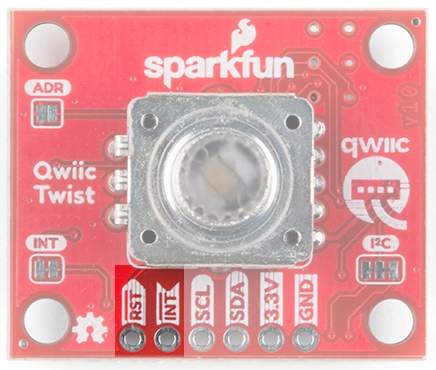 The INT pin is active low and is open drain output. The interrupt pin will go low when any of the follow events happen:

The INT pin is open drain and is pulled up through a 10k resistor but if you want to connect multiple Twists and share the interrupt pins among many Twists then you can optionally cut the jumper to remove the 10k pull up on each Twist board.

The ADR jumper is normally open and controls the I2C address of the device. By default the Qwiic Twist 7-bit unshifted address is 0x3F. If the jumper is closed with solder, the address will become 0x3E. 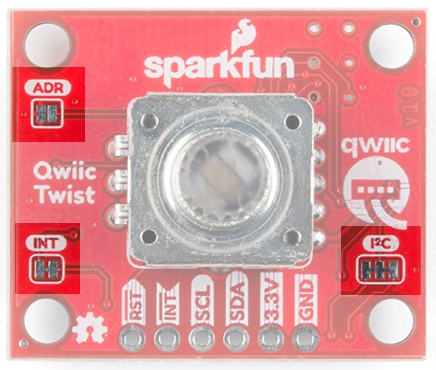 The Twist is unique in that it can have any address assigned to it between 0x08 and 0x77. This means over 100 Twists can be connected on a single bus!

Note: If the ADR jumper is closed then Qwiic Twist will resort to address 0x3E regardless of what address may have been configured via software commands. This is a safety mechanism in case the Twist gets set to an unknown address. 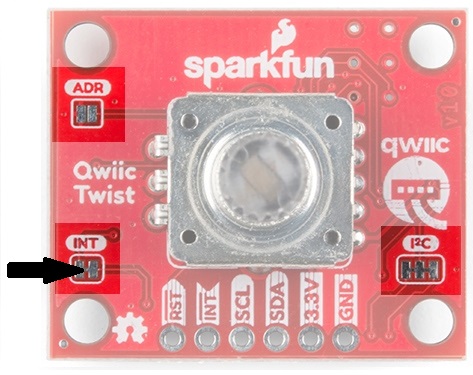 The INT pin on Qwiic Twist is open drain, meaning the pin will actively go low when an interrupt occurs but will then float when there is no interrupt. This open drain type of setup is handy if you have multiple devices sharing a single interrupt line. For advanced applications (such as many many Twists all sharing the same INT pin) you may want to cut this jumper on each Twist to remove the 10k pull ups. For general use you can leave this jumper unmodified.

The Qwiic Twist has built-in 2.2k pull-up resistors on the SDA and SCL lines. These are needed for normal I2C communication. The I2C jumper has two small traces connecting the pull-ups to 3.3V. For general use you can leave this jumper unmodified. If you have many (over 7) devices on the I2C bus, each with their own pull up resistors, then you may want to cut the I2C jumpers to disconnect the 2.2k resistors on each Qwiic board.

Color functions set the brightness of each LED.

Connect functions set the relation between each color and the twisting of the knob. These functions connect the LED so it changes [amount] with each encoder tick without the master intervening. Negative numbers are allowed (so LED gets brighter the more you turn the encoder down).

General functions get and set various aspects of the Twist.

If you’d like to use a platform other than Arduino you can easily control Qwiic Twist by accessing the following set of registers: 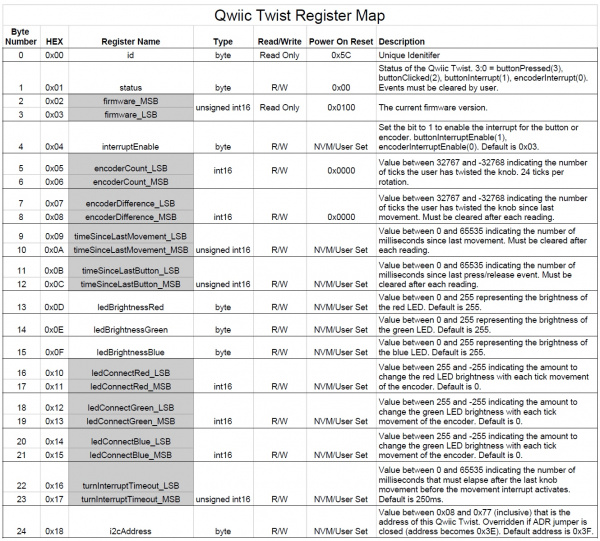 The Qwiic Twist behaves as a normal I2C slave. First write the address of the register you would like to read or write, then follow that I2C command with a Read to read the given register or a Write and a data byte to write to a register. The register address pointer is auto-incrementing so you can read and write multiple registers at a time.

One of the more advanced (but really handy) features of Qwiic Twist is the ability to connect the color control to the knob movement. What this means is that you can have the red LED brightness increase or decrease as the user turns the knob without sending commands to the Qwiic Twist. This greatly increases the responsiveness of the knob illumination and dramatically reduces I2C traffic.

In the above photo we have connected blue to increase brightness by 10 for every tick increment, and connected red to -10 per tick. The color changes automatically without the need for intervention from the I2C master. The color connect values are stored in the Qwiic Twist and will be loaded after each power-on.

See Example4 of the SparkFun library for a full demonstration.

Looking for more information? Check out the links provided here:

We hope you have a lot of fun with your Qwiic Twist! Check out these other Qwiic products:

The TFMini is a ToF (Time of Flight) LiDAR sensor capable of measuring the distance to an object as close as 30 cm and as far as 12 meters! The TFMini allows you to easily integrate LiDAR into applications traditionally reserved for smaller sensors such as the SHARP GP-series infrared rangefinders. With the added Qwiic feature, you can quickly connect to the sensor via I2C!
Favorited Favorite 3

Quick tips regarding how to connect, protect, and disconnect U.FL connectors.
Favorited Favorite 10

The Qwiic Pro Kit was designed to allow users to get started with Arduino without the need for soldering or a breadboard. We've included three inputs (a joystick, accelerometer, and proximity sensor) and one display that can be daisy chained to the RedBoard Turbo (SAMD21) Development Board.
Favorited Favorite 2
Share
Use this URL to share: