What Makes A Motor Move?

The most vague and simple answer is magnetism! Ok, now let's take this simple force and turn it into a super car!

To keep things simple, we will need to look at some concepts through the lens of the thought experiment. Some liberties will be taken, but if you want to get down and dirty with the details, you can consult Dr. Griffiths. For our thought experiment, we are going to state that a magnetic field is produced by a moving electron i.e. current. While this creates a classical model for us to use, things break down when we reach the atomic level. To understand the atomic level of magnetism more, Griffiths explains that in another book...

To create a magnet or magnetic field, we are going to have to look at how they are generated. The relationship between current and magnetics field behave according to the right-hand rule. As current passes through a wire, a magnetic field forms around the wire in the direction of your fingers as they wrap around it. This is a simplification of Ampère's force law as it acts on a current carrying wire. Now, if you place that same wire in a pre-existing magnetic field, you can generate a force. This force is referred to as the Lorentz force.

The right-hand rule shows the direction of the magnetic field in relation to the current path.
(Credit: HyperPhysics)

If the current is increased, the strength of the magnetic field is strengthened. Though, to do something useful with the field, it would take incredible amounts of current. Furthermore, the wire delivering the current would be carrying the same magnetic strength, thus creating uncontrolled fields. By bending the wire into a loop, a directed and concentrated field can be created.

The field has not changed. By bending the wire into a loop, field directions are simply aligned.
(Credit: HyperPhysics)

By looping wire and passing a current, an electromagnet is created. If one loop of wire can concentrate the field, what can you do with more? How about a few hundred more! The more loops you add to the circuit, the stronger the field becomes for a given current. If that's the case, why don't we see thousands **, if not **millions, of windings in motors and electromagnets? Well, the longer the wire the higher resistance it has. Ohm's law (V = I*R) says to maintain the same current as resistance increases, voltage must increase. In some cases it makes sense to use higher voltages; in other cases some use larger wire with less resistance. Using larger wire is more costly and is generally more difficult to work with. These are factors that have to be weighed when designing a motor.

To create your own electromagnet, simply find a bolt (or other round steel object), some magnet wire (30-22 gauge works fine), and a battery.

Note: Lithium Batteries are NOT recomended for this experiment. 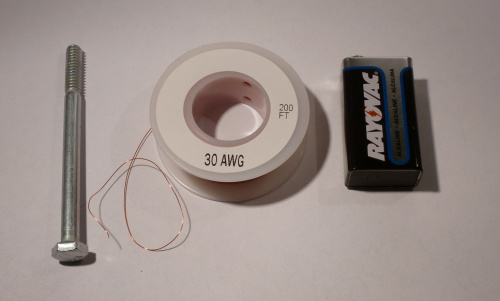 Wrap between 75-100 turns of wire around the steel. Using a steel center further concentrates the magnetic field, increasing its effective strength. We will go over why this is happens in the next section. 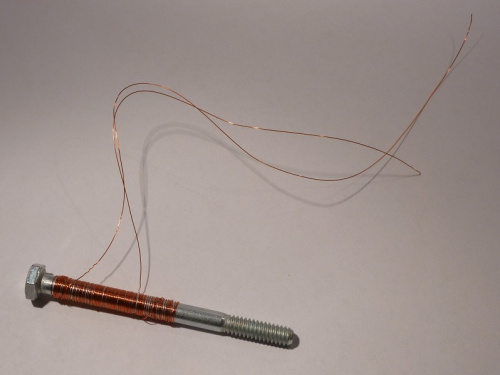 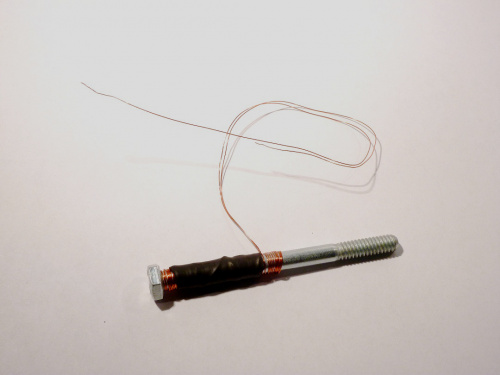 A bit of heat shrink or tape can help keep the coils on the steel center.

Now, using sand paper, remove the insulation from the ends of the wires, and connect each wire to each terminal of the battery. Congratulations! You have built the first component of a motor! To test the strength of your electromagnet, try to pick up paper clips or other small steel objects. 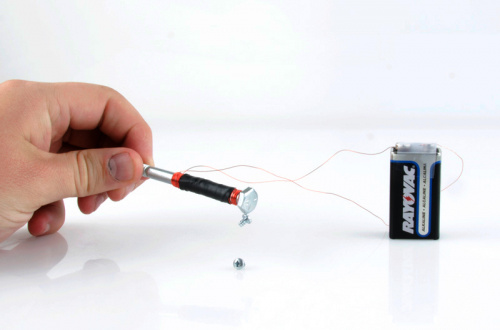 Looking back to the beginning of our thought experiment, magnetic fields may only be produced by a current. Taking the definition of current as a flow of electrons, electrons orbiting an atom should create a current and thus a magnetic field! If every atom has electrons is everything magnetic? YES! All matter, including frogs, can express magnetic properties when given enough energy. But not all magnetism is created equally. The reason I can pick up screws with a refriderator magnent and not a frog is the difference between ferromagnetism and paramagnetism. The way to differentiate the two (and a few more types) is through the study of quantum mechanics.

Ferromagnetism will be our focus, since it is the strongest phenomenon and is what we have the most experience with. Further, to relieve us from having to understanding this at the quantum level, we are going to accept that atoms of ferromagnetic materials tend to align their magnetic fields with their neighbors. Though they tend to align, inconsistencies in material and other factors like crystaline structure create magnetic domains.

When magnetic domains are aligned in a random order, neighboring fields cancel each other out resulting in a non-magnetized material. Once in the presence of an strong external field it is possible to re-align these domains. By aligning these domains, the overall field strengthens, creating a magnet!

This re-alignment can be permanent depending on the strength of the field. This is great because we'll need these in the next section.

Permanent magnets behave in the same way as electromagnets. The only difference is, well, they are permanent.

In all drawings, arrows will be pointing away from the north pole and towards the south pole. Another convention is to use the color red to represent north and blue to represent south. To identify a magnets polarity, you can use a compass. Since opposites attract, the needle will point north to the south pole of the magnet.

You can perform the same experiment with an electromagnet to determine polarity.

If you reverse the flow of current, you can see how an electromagnet can reverse its poles.

This is a key principle for building motors! Now, let's look at some different motors and how they use magnets and electromagnets.