Ultraviolet light is light between 10nm and 400nm, which places it between X-rays and visible light. Ultraviolet can be very harmful to life forms--you're probably most familiar with its effects in the form of sunburn.

UVA (315nm to 400nm wavelength) is the lowest energy band of ultraviolet light. It is nearly visible to humans, and many insects, and even some birds, can see into this light band. White fluorescent bulbs and white LEDs work by exposing a material to UVA light, which absorbs the UVA photons and emits photons in the visible spectrum, appearing white to us.

UVA is also often used to detect counterfeit documents; as a hedge against counterfeiting, many documents (passports, driver's licenses, and bank notes, to name a few) will include a watermark that glows under UVA radiation. Blacklight posters are another example of things which react to UVA light, and bleach, soap, and many biological materials will also glow when exposed to UVA.

Anti-counterfeiting features in a US $20 bill revealed by a 400nm UVA LED.

Most of the UVA light in a sunbeam reaches the earth's surface.

UVB (280nm to 315nm) is a higher energy level light than UVA. It is found in sunlight, and is responsible not only for the skin damage that causes sunburn and skin cancer but also the synthesis of Vitamin D in the human body. It is also produced by welding torches; even brief exposure to the flare from a welding torch, and even at a reasonable distance, can cause serious eye damage if the viewer is not protected. 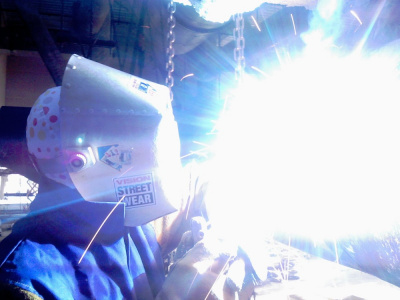 UVB light is fairly well blocked by normal window glass; this is why hanging an arm out of an open car window can result in a sunburn affecting that arm only. Richard Feynman (Nobel laureate and noted bongo musician) observed the Trinity nuclear test explosion using the windscreen of a pickup truck to protect himself from the ultraviolet radiation emitted by the blast.

Only about 10% of the UVB light emitted by the sun reaches earth's surface; the other 90% is absorbed by the atmosphere (primarily the ozone layer).

UVC ( 100nm to 280nm) tends to be the limit of the interesting UV light for us. Almost none of the sun's UVC reaches the earth's surface; the atmosphere does a very effective job of screening it away.

In the bad old days, before EEPROM memory and flash memory (which can be erased and rewritten electronically), the only non-volatile, non-magnetic means of electronic data storage was the EPROM. Once an EPROM was written, it could only be erased by being exposed to a strong source of UVC light for 20-30 minutes. For a hobbyist, that's a long time to wait to find out if the changes you made to your code fixed a bug! 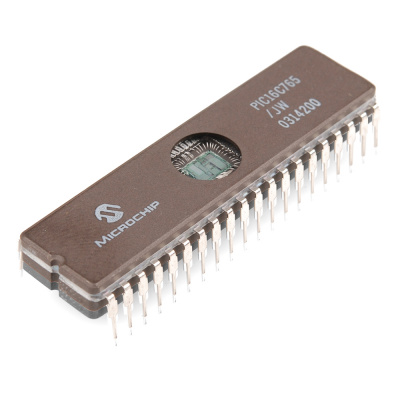 An old UV-erasable PIC16C765 microcontroller. The window over the die is made of quartz, because normal glass is not transparent to ultraviolet light.
Share
Use this URL to share: