Infrared light is light with a longer wavelength than visible light, but a shorter wavelength than microwave. It has arbitrarily been chosen to start at 700nm and stop at 1mm (1,000,000nm), making it a far larger segment of the spectrum than ultraviolet or visible light. Something like 55% of the light energy reaching the earth's surface from the sun is infrared.

Near-infrared is a region of great interest in electronics: this is the region within which infrared remote controls, object sensors, and distance detectors operate. It is just barely above the visible range, and is extremely easy to both create and detect with solid-state technologies.

SparkFun's matched infrared emitter/detector pair. Inexpensive, but extremely susceptible to interference from both visible and infrared light in the environment.

The near-infrared band extends up to 1400nm. Common emitter wavelengths are 850nm and 950nm. There is a tremendous amount of near-infrared light surrounding us at all times; the potential for interference with infrared signaling and sensing is great. Most infrared signaling systems (such as infrared remote controls solve this by modulating the beam at a fixed frequency, rather than attempting to filter out light which is not of the desired wavelength.

Modulated IR receiver module. This small IC looks for infrared light being pulsed at 38kHz and attempts to interpret it as a data signal.

Near-infrared is well detected by digital cameras, too. So well detected, in fact, that most digital cameras have a physical filter to block out infrared wavelengths. This filter can be removed, allowing greater sensitivity in the infrared range. A simple filter which allows infrared light to pass but blocks visible light can be created out of 35mm film negatives; the tag end of the film roll which has no pictures on it is perfect for this.

Two pictures of the same scene. The image on the left was taken in a darkened room with a cheap webcam that has had its infrared filter removed and replaced by film negatives, and the image on the right was taken with a standard point-and-shoot camera.

Long-wavelength infrared is light in the 8000nm-15000nm range. This is the thermal imaging zone, where all of those amazing false-color images detailing the relative temperature of things come from. 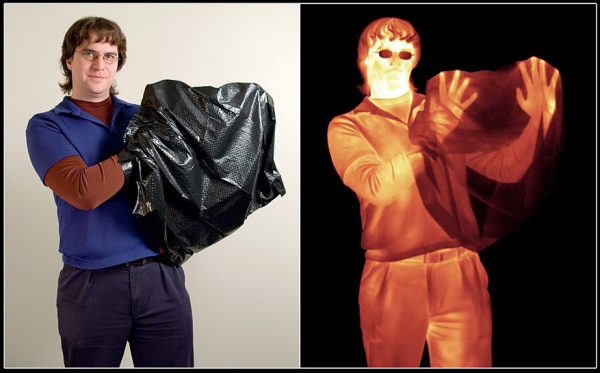 The same scene in the visible spectrum and the long-wavelength infrared. Notice that the plastic bag is opaque to visible light but nearly transparent to infrared (courtesy NASA Spitzer Infrared Telescope team).

It's a common mistake for people to misunderstand the difference between near-infrared imaging and long-wave infrared imaging. Near-infrared imaging is pretty easy to achieve--standard CMOS and CCD imaging chips can easily detect light in the near-infrared region. Long-wave IR requires special sensors, since the light beam has a wavelength 1000 times longer than near-IR. This requires a correspondingly larger geometry in the sensor elements.

Another increasingly familiar use of this region is laser etching and cutting. Most laser cutters rely on a CO2 laser tubes to generate the laser beam at a wavelength of 10640nm.