Setting Up A Base Station

Heads up! This section is a bit out of date. We've got a shiny new How to Build a GNSS Reference Station tutorial that provides up to date information. We plan to keep this section for reference.

If you’re located further than 20km from a correction station you can create your own station using the NEO-M8P-2. u-blox provides a great setup guide showing the various settings needed via u-center. We’ll be covering how to setup the GPS-RTK using I2C commands only. This will enable a headless (computerless) configuration of a base station that outputs RTCM correction data. You can watch a brief demo of this in the product video:

Before getting started we recommend you configure the module using u-center. Checkout our tutorial on using U-Center then read the u-blox datasheet on getting the NEO-M8P configured for RTK using U-Center. Once you’ve been successful controlling the module in the comfort of your lab, then consider heading outdoors.

For this exercise we’ll be using the following parts:

The NEO-M8P-2 can be configured using Serial, SPI, or I2C. We’re fans of the daisychain-ability of I2C so we’ll be focusing on the Qwiic system. For this exercise we’ll be connecting the an LCD and GPS-RTK to a BlackBoard using two Qwiic cables.

For the antenna, you’ll need a clear view of the sky. The better your antenna position the better your accuracy and performance of the system. We designed the GPS Antenna Ground Plate to make this setup easy. The plate has a ¼” threaded hole that threads directly onto a camera tripod. The plate thickness was chosen to be thick enough so that the threaded screw is flush with the plate so it won’t interfere with the antenna. Not sure why we’re using a ground plate? Read the u-blox white paper on using low-cost GNSS antennas with RTK. Mount your magnetic mount antenna and run the SMA cable to the U.FL to SMA cable to the GPS-RTK board. 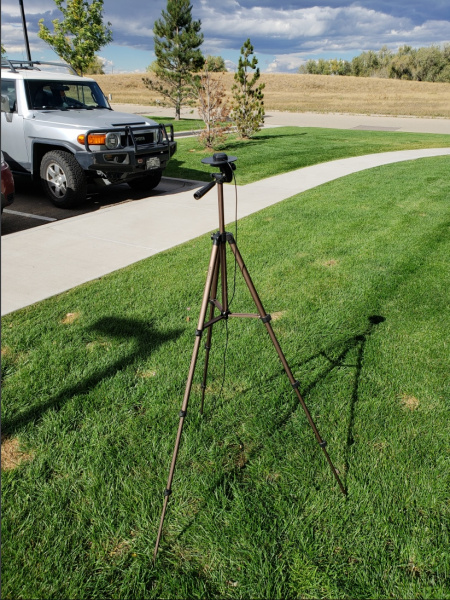 There are only three steps to initiating a base station:

The NEO-M8P subfolder houses a handful of sketches specific to its setup. Example3 demonstrates how to send the various commands to the GPS-RTK to enable Survey-In mode. Let’s discuss the important bits of code.

The library is capable of sending UBX binary commands with all necessary headers, packet length, and CRC bytes over I2C. The enableSurveyMode(minimumTime, minimumRadius) command does all the hard work to tell the module to go into survey mode. The module will begin to record lock data and calculate a 3D standard deviation. The survey-in process ends when both the minimum time and minimum radius are achieved. u-blox recommends 300 seconds (5 minutes) and a radius of 2m. With a clear view of the sky, with a low cost GNSS antenna mounted to a ground plate we’ve seen the survey complete at 301 seconds with a radius of around 1.5m.

These four lines enable the four RTCM output messages needed for a second GPS-RTK to receive correction data. Once these sentences have been enabled (and assuming a survey process is complete) the GPS-RTK base module will begin outputting RTCM data every second after the NMEA sentences (the RTCM_1230 sentence will be output once every 10 seconds). You can view an example of what this output looks like here.

The size of the RTCM correction data varies but in general it is approximately 350 bytes every second (~500 bytes every 10th second when 1230 is transmitted).

If you have a ‘rover’ in the field in need of correction data you’ll need to get the RTCM bytes to the rover. The SparkFun u-blox library automatically detects the difference between NMEA sentences and RTCM data. The processRTCM() function allows you to ‘pipe’ just the RTCM correction data to the channel of your choice. Once the base station has completed the survey and has the RTCM messages enabled, your custom processRTCM() function can pass each byte to any number of channels:

The power of the processRTCM() function is that it doesn’t care; it presents the user with the incoming byte and is agnostic about the back channel.

Heads up! We’ve been experimenting with various LoRa solutions and the bandwidth needed for RTCM (~500 bytes per second) is right at the usable byte limit for many LoRa setups. It’s possible but you may need to adjust your LoRa settings to reach the throughput necessary for RTK.

What about configuring the rover? u-blox designed the NEO-M8P to automatically go into RTK mode once RTCM data is detected on any of the ports. Simply push the RTCM bytes from your back channel into one of the ports (UART, SPI, I2C) on the rover's GPS-RTK and the location accuracy will go from meters to centimeters. The rover's NMEA messages will contain the improved Lat/Long data and you'll know where you are with mind-bending accuracy. It’s a lot of fun to watch!