We have updated this tutorial in "Choosing an Arduino for Your Project." If you are looking to compare specs of different Arduino boards you can view our Arduino Comparison Guide.

View the updated tutorial: Choosing an Arduino for Your Project

The e-textiles segment of the Arduino market is ruled by LilyPads. These are identifiable as unique purple, flowery-looking, circular boards. The pins on LilyPads are called "petals", they have bigger holes and copper filled to the edge of the board. These are designed so conductive thread can be sewn through the holes, and make electrical contact with the exposed copper on the petal. 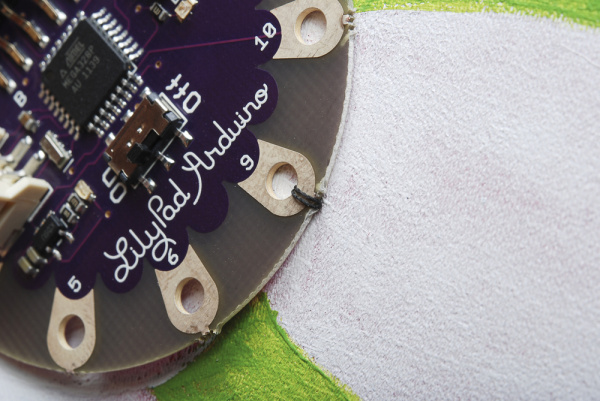 LilyPads are great for e-texitles -- projects which combine electronics and fabric wizardy. They can be used to make nifty talking aprons, dice gauntlets, or more simple trinkets like light-up firefly jars.

The O.G. LilyPad is the LilyPad Arduino. This is basically a purple Arduino Pro 3.3V/8MHz. All of the pins -- 14 digital and six analog -- are arranged around the outer edge of the board. There are also inputs for power at the '+' and '-' pins. 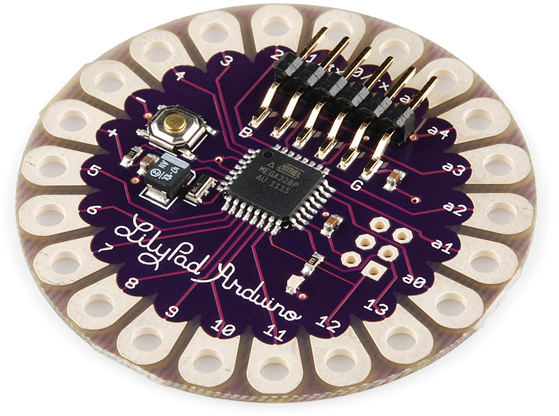 Like the Arduino Pro, the ATmega328 LilyPads are all programmed using an external FTDI Basic. There's even a purple one especially for LilyPads!

True to its name, the LilyPad Arduino Simple is an easier-to-use version of the standard LilyPad Arduino. Fewer pins are broken out -- nine digital and four analog -- but the LilyPad Simple has some added functionality too. This board is designed specifically to be powered by a Lithium Polymer battery. There's an on-board JST connector for the battery to plug into, and there's even a special circuit dedicated to charging the battery. 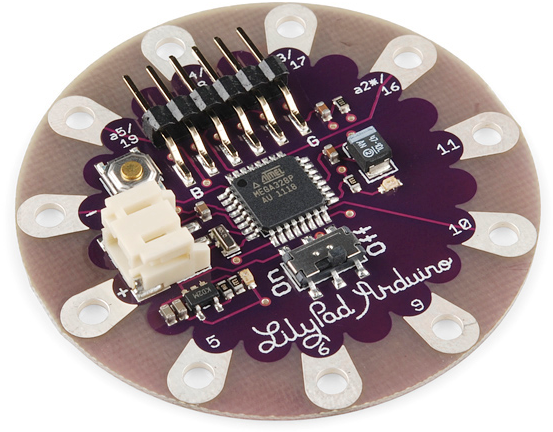 This Board is recommended for beginners and experts alike. As long as you're OK with having less I/O pins, the extra functionality of the Simple makes it well worth it.

The LilyPad Arduino SimpleSnap is an offshoot of the Simple. The layout is the same, the battery-charging functionality is still there, but instead of an array of petals around the board there are snaps.

These snaps can be plugged into the mating snaps on a SimpleSnap ProtoBoard, or any size 1/0 snap already sewn into a fabric.

A permanently attached battery on the SimpleSnap also sets it far apart from other LilyPad boards. Just flick the switch to "ON" and the board should start running its sketch. To charge the battery, plug an FTDI Basic into the SimpleSnap.

This board is an awesome choice if you want the added ability of easily removing your LilyPad from an e-textiles project. You can unsnap the board and wash your textile, or even share it with another project.

The boards above -- all with an ATmega328 as the brain -- all require an external FTDI Basic to have code uploaded to them. The LilyPad Arduino USB -- which uses an ATmega32U4 -- has all of the USB functionality on-board. It has a micro-B USB connector, so you just plug the cable in, attach it to your computer, and program away! 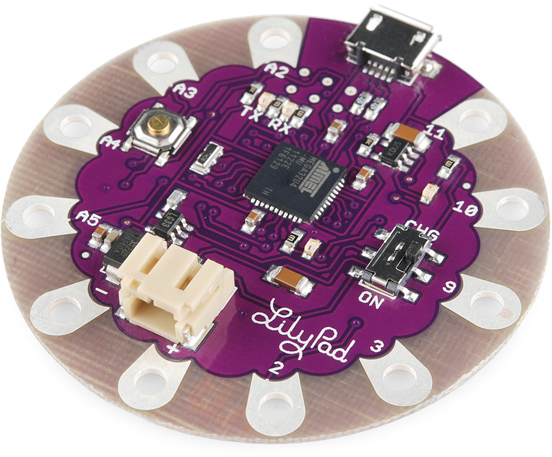 The LilyPad Arduino USB is comparable to other ATmega32U4 boards, like the Leonardo. It's got nine digital I/O's and 12 analogs. Like the LilyPad Simple, this board has an on-board JST connector and LiPo battery charge circuit. So it's very easy to pair with a LiPo battery and embed into your project.