High-­school science teachers can radically reduce the cost of building up science labs while giving students opportunities to engage in genuine design processes by introducing them to open­-source hardware. A vast collection of free and pre­-designed low-­cost scientific tools are available, many of which can be printed on a open­-source 3­D printer, including the printer itself. Not only can students benefit from access to research grade equipment, there are ample opportunities for students to build on, improve, and customize scientific tools as part of their curriculum. In this way the number and value of the open­-source hardware designs can expand with student effort, enabling a powerful motivating factor for science education.

Education in the U.S. is financially challenged, but academic programs that involve students working in laboratory experiments are perhaps the hardest hit. Experiments can be virtualized and there are many good DIY experiments designed for high school curricula, but these types of experiences lack the gravitas brought by real scientific research with modern instruments.

Unfortunately, both “research grade” and even educational scientific equipment has been historically expensive, and has become increasingly prohibitive as education budgets dwindle. A potential solution to this problem has been provided by open-­source concepts. Free and open-source software is computer software that is available in source code form and that can be used, studied, copied, modified, and redistributed without restriction, or with restrictions that only ensure that further recipients have the same rights. The open-­source method of development has been so successful that much of the Internet now relies on it. You use it every day as the Internet giants all run it behind the scenes. This process of developing technology has become a real movement as the method that has succeeded in software is now being applied to hardware. Most interesting to science teachers it has been adapted to scientific hardware (Pearce, 2014).

There have been two recent open­source hardware developments that make this possible: the Arduino microcontroller (and other OS electronics like the Raspberry Pi and Beagleboard) and the RepRap 3­D printer (see Figure 1). 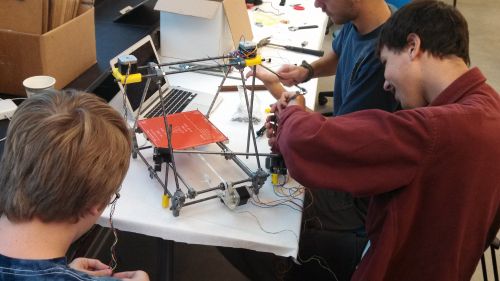 Figure 1. A student team building a MOST RepRap 3­D Printer.

Arduino microcontrollers are a family of low-­cost completely open-­source integrated circuits that contain a core processor, memory and standardized analog and digital input/output peripherals. As Arduinos are relatively easy to learn and use, they have been applied in a vast number of science research and education areas including lab kits (Sarik & Kymissis, 2010). They are versatile – so that a single Arduino can be used in dozens of different types of student experiments and integrated into research grade equipment (Pearce, 2012;2014). As everything about this technology is liberated there is now an enormous databank of small programs that make the Arduinos capable of providing starting points for lab automation, data collection, robot experiments and more.

One of the useful automation projects in the vast Arduino collection for the high school science teacher are open-­source 3­D printers known as RepRaps (self-­replicating rapid prototypers capable of making >50% of their own parts). RepRaps can be made with off-the-shelf components for under $500, which makes 3­D printing accessible to most schools. The RepRap can use designs from most CAD packages such as the free OpenSCAD, an open-­source, script-­based computer aided design application. It is used by writing code to describe the geometric specifications of the required object by using primitive shapes, complex polygons, and extrusion commands. OpenSCAD is a good way to teach students geometry and coding (Knill & Slavkovsky, 2013). It also allows for parametric designs, which is the ability to alter a design to specifications by changing the parameters of the geometry of an object. This allows changes to be made to the design easily and quickly by simply changing the value of user-­defined variables – so once one person designs it, everyone can quickly customize the design for themselves. Dozens of scientific equipment designs are already flourishing in Youmagine and Thingiverse, free and open repositories for digital designs of real physical objects. The latter also maintains a customizer application that converts OpenSCAD scripts into easily manipulatable designs (Figure 2). 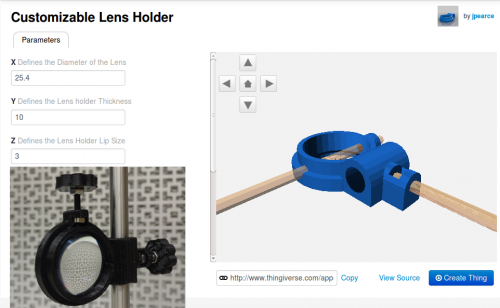 Figure 2. A screen shot of an open-­source lens holder in the Customizer App, which allows anyone to quickly design and then print an ideal holder for their experiments. Printed holder shown in inset.

To appreciate this approach consider the recently developed open-­source optics library, built from standard low-­cost parts available in most hardware stores, Arduinos and customizable printed parts (Zhang, et al., 2013). This collection of inexpensive 3­D printable components from simple fiber optic holders to automated filter wheel changers is being used to radically reduce the cost of optics equipment in labs. For example to outfit a high school physics laboratory with 30 optics setups including optical rails, optical lens holders, adjustable lens holders, ray optical kits, and viewing screens, the total cost is less than $500 using the open-­source optics approach as compared to $15,000 for commercial versions. Free and open-­source hardware has simply made it less expensive to design and print scientific tools than to buy them, particularly if someone else has started the designs.

Finally, and perhaps most importantly, when you alter an open-­source design you are obligated to share your improvements with the rest of the community under the open-­source licenses. This can be built into the curricula so that by taking the extra step of sharing all of these designs, students can make a concrete contribution to help the acceleration of open-­source scientific hardware for everyone. This can be a powerful motivating factor for students.

One of the most important conceptual shifts in science instruction as outlined by the Next Generation Science Standards is that, “K­12 science education should reflect the interconnected nature of science as it is practiced and experienced in the real world.” This learning objective is addressed with students actively participating in the open­source community by modifying existing designs and creating original models. Open-­source hardware and software are giving students unprecedented access to incredibly powerful design tools. These tools allow students to generate high resolution designs within the CAD software and ability to rapidly prototype their ideas with very low cost. This iterative process of designing, testing, and redesigning is at the core of the intention of the NGSS to further integrate engineering and technology into science instruction. Enabling students to participate in this open-­source community allows them to see the reality of the design process by seeing the multitude of designs available on such sites as Youmagine. After browsing the site, the students are able to access files for modification or complete redesign.

Examples would include students modifying gear sizes for mechanical projects to varying scales and shapes of prosthetic limbs. Encouraging the students to upload their work to the open-­source repositories give them a sense of genuine application and participation in the scientific community. This empowers students to begin seeing themselves as active participants and designers rather than passive consumers both of knowledge and products.

Pearce, J.M. 2014. Open­Source Lab: How to Build Your Own Hardware and Reduce Research Costs, Elsevier.

Joshua Pearce, Ph.D., is the director of the Open Sustainability Technology Research Group at Michigan Tech University. Housed within the Materials Science & Engineering and Electrical and Computer Engineering departments, the lab explores the way solar energy can be used to provide clean sustainable electricity through photovoltaic devices and how the sharing of open source hardware and software can create sustainable and equitable means of production.

Teaching Near and Far