Garth Sundem, big-time author and GeekDad contributor, came by the new SparkFun HQ with his family. Here's what he had to say about it.

Garth Sundem, author and Geekdad contributor, came by the new SparkFun HQ with his family. Here's what he had to say about it. (We promise we didn't change a word).

I’m more science geek than technology geek, but lately I’ve been doing my best – learning how to solder and code by building SparkFun kits along with my kids (6 and 8), first the WeevilEye, then Herbie the little mouse kit and now into the world of Arduino. (My daughter, Kestrel, bounces off furniture and people and walls as if she were the cue ball of a billiards trick shot, but she’ll sit and solder for a straight hour.) What this means is that instead of looking at soldering kits from the perspective of an electrical engineer who, I’m sure, sees these kits as simple teaching tools, I’m completely flabbergasted along with my kids when Herbie hits a wall and his electrical whiskers make the mouse turn. Wow! When we reach the great moment of flipping the switch to "on", my armpits sweat.

All this is to say that when I scheduled a tour of the new SparkFun building just outside Boulder, CO, I told the education director that my kids were really excited. But in fact, I was Charlie waving my golden ticket while the offspring played the part of Grandpa Joe.

Who do you usually get as a guide when you take a corporate tour? Usually it’s the intern who hasn’t mastered the all-important corporate skill of looking harried and over-busy. At SparkFun we got Ben Leduc-Mills. Ben has a PhD in computer science. Ben was really excited about the open source SparkFun data site where users can publish streams up to 50mb. My kids were really excited about the fact that SparkFun employees can bring their dogs to work. Leif counted seven dogs and I’m sure there were more. Production manager Adam Silva explained that he had raised three dogs at SparkFun.

The thing is, we’ve all been in the offices of “creative” organizations that overreach for hipness – from somewhere upon high, the corporate overseers imagine that a scooter track will totally help recruit talent from MIT and Stanford. And then no one uses it. 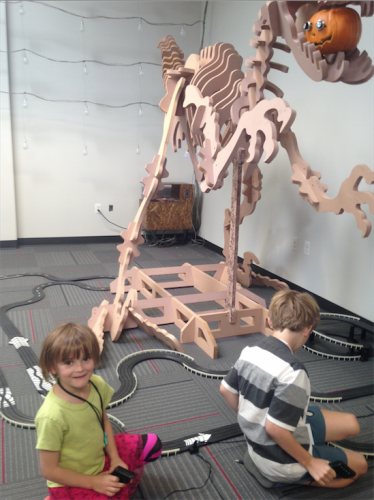 SparkFun has some of the same uber-hip accoutrements, but it felt like the ideas grew organically from the employees. The shipping department was full of dudes with asymmetric facial hair on skateboards. An engineer had picked up about a thousand Keva planks and on an upstairs wrap-around counter space, there was a crowdsourced build going on – in which you could tell the crowd had higher than the average bear’s level of design thinking skills. Strung on a wall was a DIY art piece made of light bulbs and wire that was set to ripple in response to sounds. A trigger-operated race car track wound underneath a 7-foot tall version of one of those wooden dinosaur skeleton kits. The office of their e-textiles engineer is painted like a fairy forest, with a rack of antlers framing the chair’s headrest. These are the essentials. I'm sure that with a second month in their new building, additional interesting oddities will bloom.

Ben explained the cool things you could do with an Edison Board – it is WiFi enabled, which seemed to be really important to Ben. I am still severely limited by my lack of imagination but look forward to grokking the possibilities, just as soon as I finish the tutorial for my Digital Sandbox...

But the cool thing about visiting the SparkFun mothership was that despite being one small step above e. coli in my ability to build and code, as I walked out of the building everything seemed possible. I felt like I could go home, download some open-source SparkFun code and program a drone that would drop water balloons on my wife as she bikes to work. I could make the limbs of my front yard tree grab tick-or-treaters as they step on the welcome mat. I could insert small Arduino-driven electrodes into the brains of my children that would force them to open and close their mouths in the presence of broccoli.

People at SparkFun are psyched to build. And after visiting, I am too.

More about Garth, from Garth:

I write books, speak and blog about science, math and the brain. Usually this includes interviewing people who actually know what they’re talking about, namely scientists. Other than keeping a close eye on the ecology of my backyard from the vantage of the semi-converted garden shed that is my office, this is my favorite part of the gig: talking to people who are absolutely passionate to the point of excess about things like the mathematics of graph theory used to describe a soccer ball passing through the system of a team, or how to mimic the brain states that make us ready for insightful solutions, or the differences in wisdom between old and young people as they play games that simulate mineral extraction.

I grew up on Bainbridge Island, WA, a short ferry ride from Seattle, where my dad — a former president of the American Accounting Association — taught for 34 years in the U.W. business school. We played with math growing up, scribbling through issues of Games Magazine cover-to-cover. Later, I studied math and music composition at Cornell University and then at Western Washington University, and was an adjunct professor at Montana State University. I live in Boulder, CO with my wife, two kids and a pack of Labradors.