Jason Griffey is an Associate Professor and Librarian at the University of Tennessee at Chattanooga, as well as a consultant and speaker for libraries around the world. His latest book, Mobile Technology and Libraries, is a part of Neal Schuman's Tech Set, which was the winner of the ALA 2011 Award for the Best Book in Library Literature. He has written extensively on topics such as the future of technology and libraries, personal electronics in the library, privacy, copyright, and intellectual property. Jason was named a Library Journal Mover & Shaker in 2009.

His current obsession is the LibraryBox Project, a portable digital file distribution system. He can be stalked obsessively at www.jasongriffey.net and information about consulting and speaking can be found at here. He spends his free time with his daughter Eliza, reading, obsessing over gadgets, and preparing for the inevitable zombie uprising.

Jason was part of a four-person super team from Chattanooga that came out for our Hackers in Residence program. We had a wonderful time getting to know these guys and brainstorming exciting ways to collaborate on bringing SparkFun technology and education outreach to libraries. We are pretty jazzed about Jason's LibraryBox project and invited him to give us an update. So, without further ado, I bring you Jason's update. 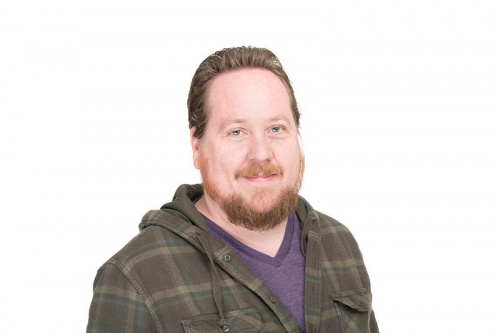 Over the last few months, there’s been some interesting technology sharing going on in the background at SparkFun between the education department and the LibraryBox Project. LibraryBox is an open source project dedicated to the sharing of digital information in areas with limited or no Internet access...which makes it a fantastic tool for sharing educational information when you aren’t certain of the connectivity where you’ll be teaching.

The LibraryBox Project just released its v2.0, after being funded on Kickstarter in the Summer of 2013. This release brings a plethora of improvements to the project, including a much easier installation process and wider variety of supported hardware (you can basically download the software and install it on the hardware yourself in a few clicks), a Bootstrap-based web interface, anonymous statistics and significantly easier to customize in general. Designed with libraries and education in mind, LibraryBox makes it easy to share content to anything with wifi and a browser, from smartphones to laptops.

Derek at SparkFun saw the potential for using LibraryBox to deliver code samples, and possibly an entire coding environment, at the variety of classes and hackathons that Sparkfun was involved in. To that end, he has been working on the SparkBox, a new UI and content pack for the Librarybox project that has the potential to make educational opportunities for programming possible in places without existing internet connectivity.

There will hopefully be more cooperation between SparkFun and LibraryBox over the next few months. If you’ll be at Maker Faire 2014 in San Mateo, CA this month, swing by the SparkFun booth and check the wifi...there might just be a Librarybox sharing some free books, movies, and more.

SparkFun and the Science Lounge