How the Beastie Boys helped this little girl grow up to be a scientist. 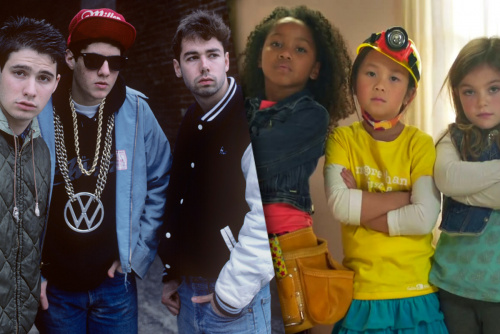 GoldieBlox should be a total win for someone like me. I am a 32 year-old female with a doctorate in a scientific field. I grew up with a single mother who mercilessly coached me on growing up to be an independent and successful woman. I’ve been in plenty of those situations where you don’t see a lot of other females, like being the only little girl on a Little League tee ball team. Now I am the Director of Education at an electronics company where I work with a fantastic team dedicated to providing accessible and affordable technology and materials to all students. As you can probably imagine, getting young women interested in becoming scientists and engineers is a given.

When I first learned about GoldieBlox through their Kickstarter campaign I supported it just on principle – how could I not? Unfortunately, when I received the kit I felt deeply disappointed but I was a bit afraid to come out and say that. How could I possibly say that I think this brand new toy designed by a female engineer that was going to take over the pink aisles of the toy stores was totally underwhelming? First of all, aside from the picture of Goldie on the box and in the book, you are playing with five animals and the gender breakdown of the characters looks like 4:1 male to female. Is this the best you could do? Second, who cares if girls like pink and purple? This goes for young boys as well by the way. Most of the time my hair has pink or purple dye in it and a great role model for future female engineers, Limor Fried, rocks a full head of hot pink hair. Color is not the issue. I hear the new toy has something to do with a pageant. Seriously? 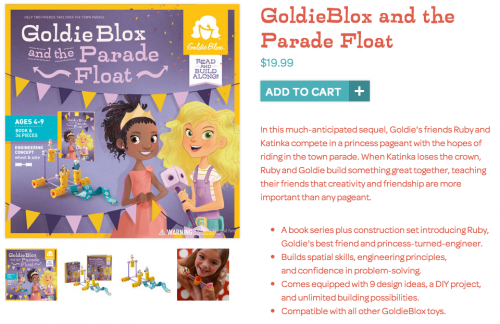 When the hundredth person sent me a link to the GoldieBlox Girls video I painfully cringed at the Beastie Boys “parody” and wished it hadn’t been an advertisement for a toy and just a public service announcement to energize young girls. When the first story broke that the Beastie Boys were suing GoldieBlox I took a moment to ponder what to do with this incredible clash between a lifelong love and a career passion. I held out judgment hoping the story would turn around because I just could not believe that the Beastie Boys would make that move. It appears I was right. That being said, this post is not a legal or ethical analysis of this situation. My background is in science and I have absolutely no legal training. I’ve read as much as I can tolerate regarding Fair Use laws. I actually don’t even care anymore. What I do care about is the fact that the GoldieBlox toys are not actually worth the hype and young girls would learn a lot more from cranking the volume on a few Beastie Boys albums and building, hacking and tinkering.

If you asked anyone that knows me even remotely well what thing (s)he associated me with, most people would say the Beastie Boys. The outpouring of people sending me condolences the day that Adam Yauch passed away would have looked to an outsider like I lost a family member. And while I was just another fan in his world, he was an immeasurable part of mine. 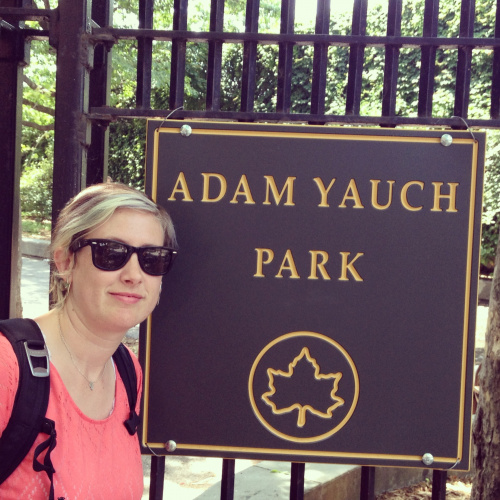 Forcing a smile for the camera while visiting Adam Yauch Park in Brooklyn.

My memories of listening to the Beastie Boys date back to my early elementary school days. My musical interests were definitely shaped by watching television in the glory days when MTV and VH1 played music videos. I’ve been a fan so long that I own Beastie Boys albums in four different form factors of music recordings. They were the soundtrack to my awkward adolescence, trials and tribulations of transitioning from the teenage years into adulthood, and the ups and downs of every relationship I have ever had. I’ve listened to their music in my happiest, saddest, and darkest times.

I was in high school when Adam Yauch was working on the Tibetan Freedom Concerts. I won’t deny that there were elements of idolatry and delusion in my relationship with this band. I subscribed to the Buddhist magazine, Tricycle, and had them addressed to Lindsay Yauch. Much to the dismay of my ever stylish yet accepting mother, my entire fashion sense through middle and high school was influenced by them. I read books on Tibetan Buddhism and frequented a meditation group. I listened to chanting, became a vegetarian, and tried to save every insect that crossed my path – a tall task in Florida. Then my scientific brain hit a roadblock with the reincarnation piece and decided that while there were plenty of tenets to carry with me for the rest of my life, I needed to allow myself the space to find my own way.

Without ever giving it much direct thought, growing up listening to the Beastie Boys meant that I knew I could be whomever I wanted to be and, when I wanted to change, I could do that too. Authenticity and confidence is what I learned from the Beastie Boys and that’s what got me through all of the challenges that anyone, not just young women, face growing up. I listened to Get it Together when I couldn’t handle the dramas of high school, I listened to the Sounds of Science when I needed the motivation to get past another failed experiment in the lab, I listened to Hey Ladies (and watched the video) when I wanted to get energized for a night out with friends, I listened to Netty’s Girl when I daydreamed of a crush pining for me, I listened to Skills to Pay the Bills when I needed the confidence to go in and defend my dissertation, and I listened to Boomin’ Granny when I just needed a good laugh.

The Beastie Boys have always been authentic and yet willing to make amends with their past. They have apologized to women and the gay community for lyrics and statements that were hurtful. They’ve composed lyrical penance, admitted failures of judgment, and owned all of it. Even in the midst of the bratty beer drinking, breath stinking, sniffing glue days it was still just three young men growing up through music. Sure, they had ridiculous and mostly satirical lyrics about girls doing laundry and the dishes, but in real life they dedicated themselves to causes like Tibetan freedom and victims of Hurricane Sandy. They have always been poignantly human even down to the very disease that rips many of our own families apart.

A toy with a female character on the front and animal characters spinning rods and cylinders is probably not going to inspire a young girl to be an engineer nor will it likely change a girl’s life. A parent, friend, teacher or musical influence that gives a young girl the confidence to take on whatever she desires probably will. Failing, dusting off the overalls, and trying again is the lesson. You don’t need a bunch of plastic parts to get young girls interested in science, technology, engineering, art and mathematics. 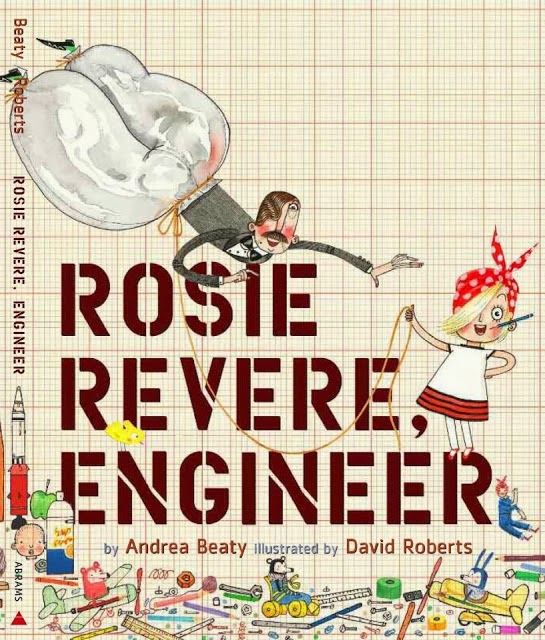 Go out to your garage or your local hackerspace and let them build things, let them hack, tinker, create and customize. Let them fail and rebuild. Take that $30 and spend it at your local hardware store or art store. Buy Rosie Revere, Engineer and read it to your daughter and her friends. Pick one of the thousands of tutorials that are out there and go build something together. Help a young girl build her prototype of a better injection system for helping to vaccinate people in underprivileged areas or a solar-powered clinic that can be set up after natural disasters. Find old milk crates and build emergency veterinary hospitals or find cardboard and build structures to launch rockets and spaceships. Help them identify mentors and idols and don’t worry too much if it’s not Marie Skłodowska-Curie or Grace Murray Hopper right now – that may come in time. Let them wear weird outfits and dye their hair and listen to music that hurts your ears. Let them wear princess dresses out to Home Depot to buy materials to build a fort. Let them explore things and give them the room to change and grow. Just like the Beasties put it in Pass the Mic, encourage them to be true to themselves and they will never fall.

National Tour- Virginia to Nebraska and Then Home