Now that you can actually power up the RN-52 and send it into command mode, let's talk about changing the settings, and thus the behavior, of the Bluetooth module.

You are now in Command Mode!

To exit command mode, simply flip the switch back to the OFF position. You will see END appear in the window.

*Note: The RN-52 can enter and exit CMD mode _while_ streaming music.

This portion of the tutorial will only briefly touch on the command set. To see a list of all the RN-52 commands, read the Command Reference User Guide.

Get commands query the device for information. 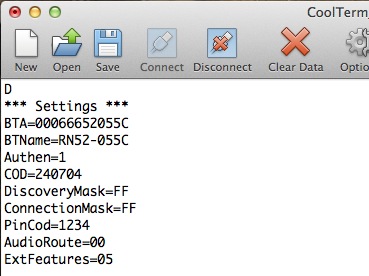 Set commands change actual settings of the module such as name, profile mode, and extended features.

All set commands are followed by an AOK if the command was entered correctly and an ERR if it was not.

Action commands tell the module what action to take. With these commands, you can accept incoming calls, change the volume, change the track, and pause your music. Check out the Command Reference for a complete list of action commands.

This is especially important to note if you plan on having a microcontroller communicate with the RN-52.