I2C communication on the pcDuino is pretty easy. 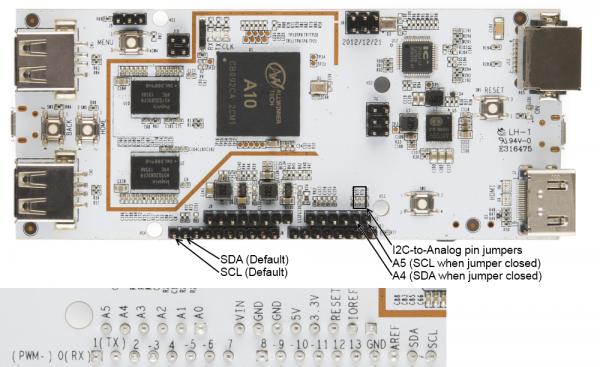 As with serial communications, there are several I2C bus devices, but only one (/dev/i2c-2) is readily available to the user. A very, very important feature to take note of is that the I2C bus speed is fixed at 200kHz, which means that some devices may not work on the pcDuino I2C bus. The bus speed is fixed at driver compile time and cannot be changed from user space.

The pcDuino has on-board 2.2k pull-up resistors. These are pinned out to the Arduino-ish header, to the location typical for Arduino Uno R3 and later boards. On older boards, the pins were shared with analog inputs 4 and 5; there are solder jumpers on the pcDuino which allow you to redirect the SDA and SCL lines to those pins if you so desire. They're labeled on the image above, and they're designated R75 and R76.

There's also a lovely set of tools that allow you to twiddle around with the I2C bus a bit without writing any code. To install this toolset, open a command line and type

These tools can be a valuable sanity check for your hardware, so you can verify that problems you're seeing are, in fact, in your code.

This simple program will connect to a couple of devices on the I2C port, read their device ID registers, and print them to the command line. The board used for the example is a SparkFun 6DOF Digital, but the principle is the same for any devices.

Python has a support package much like pySerial to make interfacing with I2C devices easier. To install it, open a command line and type

SMBus is the name given to the I2C derivative used on PC motherboards. The main differences are hardware-level and not reflected in the user coding level, so we'll ignore them and just point out that the SMBus Python package can be used here.

This code does the same thing the C++ code does: queries the two devices on a 6DOF digital and prints the result to the command line.