The Raspberry Pi foundation has provided the necessary tools, documentation, and examples to get started with the RP2040. If you haven't already, check out the documentation on the Pico. We'll use this as a reference when using the chip on other development boards to fit your needs in this tutorial.

We'll be using the MicroPython examples from this repo using Thonny IDE.

Installing MicroPython on the RP2040

Note: Interested in going further? The Raspberry Pi Foundation also released a book to get started with the Pico's RP2040: "Get Started with MicroPython on Raspberry Pi Pico."

Get Started with MicroPython on Raspberry Pi Pico

To install MicroPython on the RP2040, you will need to download the firmware from Raspberry Pi. Click below to head to the Raspberry Pi Foundation's MicroPython UF2 File for the RP2040. Click on the tab for the "Getting started MicroPython" and the button for Download UF2 File.

Press and hold the boot button down with one hand. 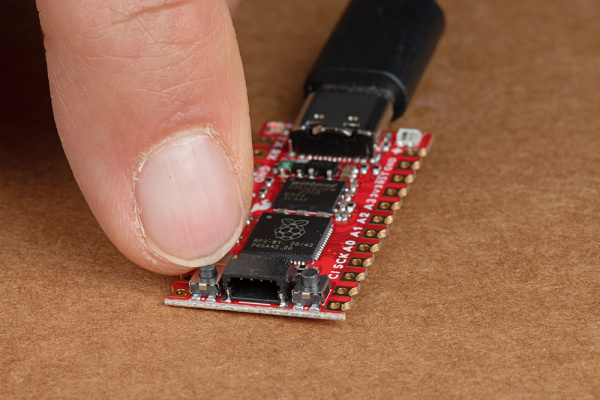 Release the boot button. The board should appear as a removable drive called RPI-RP2. 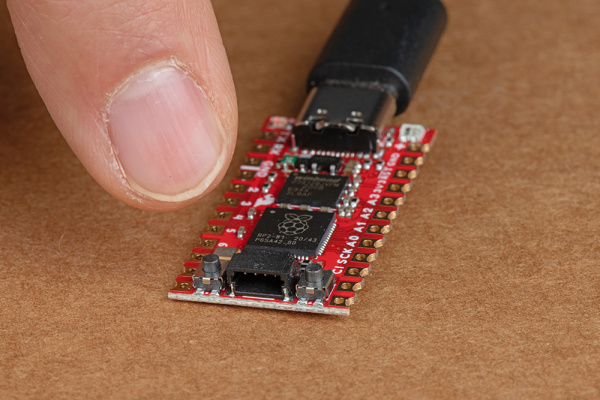 Draw and drop the UF2 file into the "removable drive". The board will automatically reboot. Below is an image highlighting the UF2 file being moved to a the removeable drive on a Raspberry Pi. 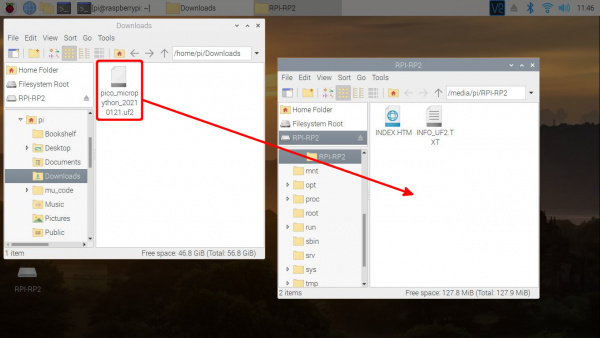 Note: If you are using a Raspberry Pi, make sure that you are using the latest Raspberry Pi image. Enter the following command in the LXTerminal to download and install the the latest packages. The && combines the two commands into a single line and the -y answers "yes" to any prompts.

Check to make sure that you are using Thonny v3.3.3 and above. If you are using a Raspberry Pi, type the following command to check the version:

You should get a result similar to the output below. If you have a version that is equal or higher, you should be good to go!

If you are using a different operating system, you can also download the Thonny IDE. 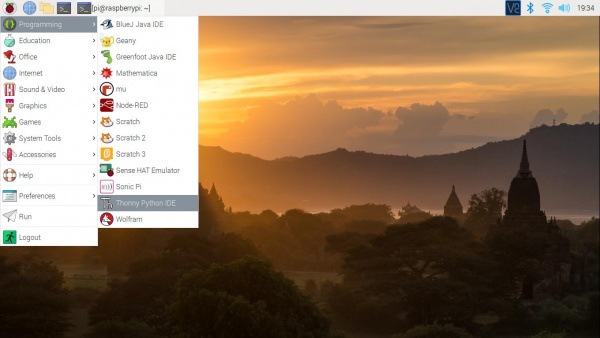 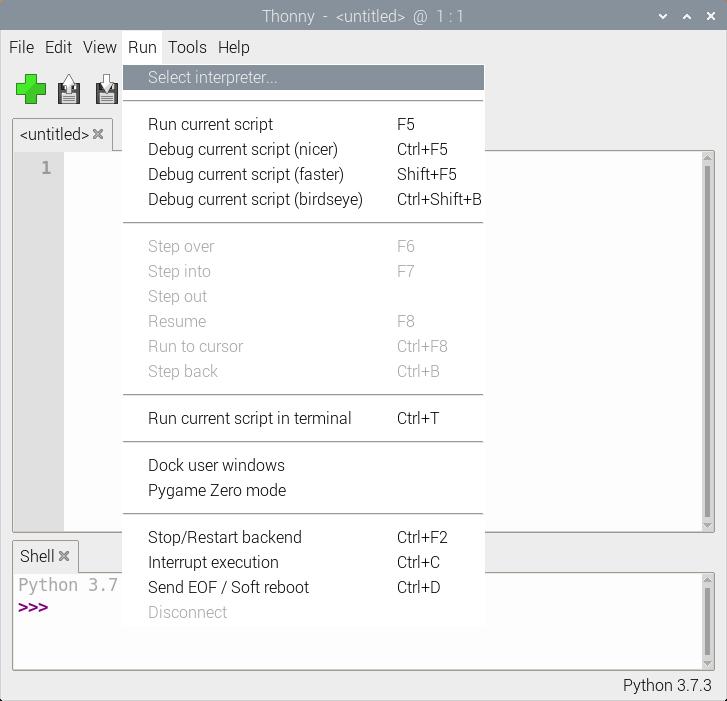 This will open a new window for the Thonny options. In the Interpreter tab, select MicroPython (Raspberry Pi Pico) as the interpreter. 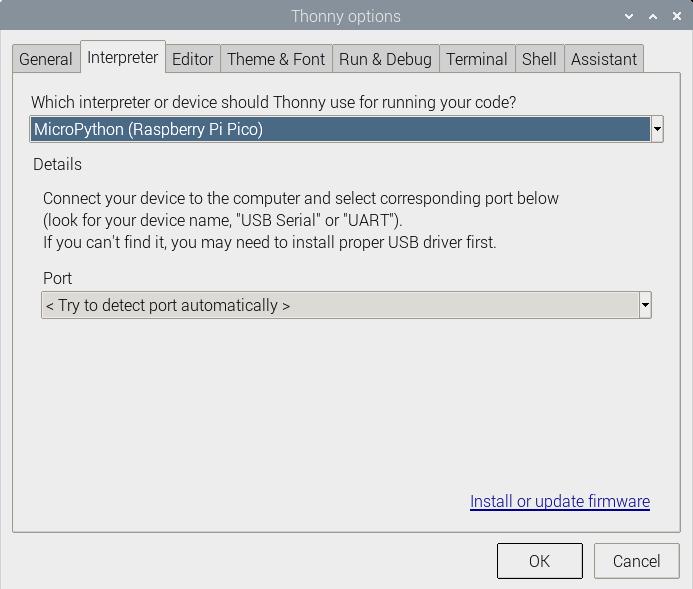 Note: You can also click on the bottom right to Configure Interpreter... and follow the same steps outlined above. 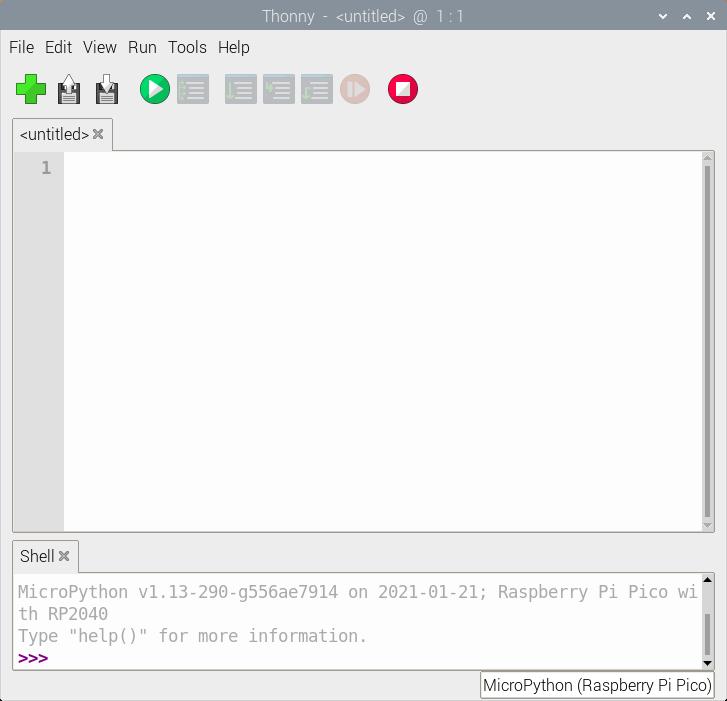 In the same window, make sure to select the option to have Thonny automatically detect the COM port for the board: Port > < Try to detect port automatically > 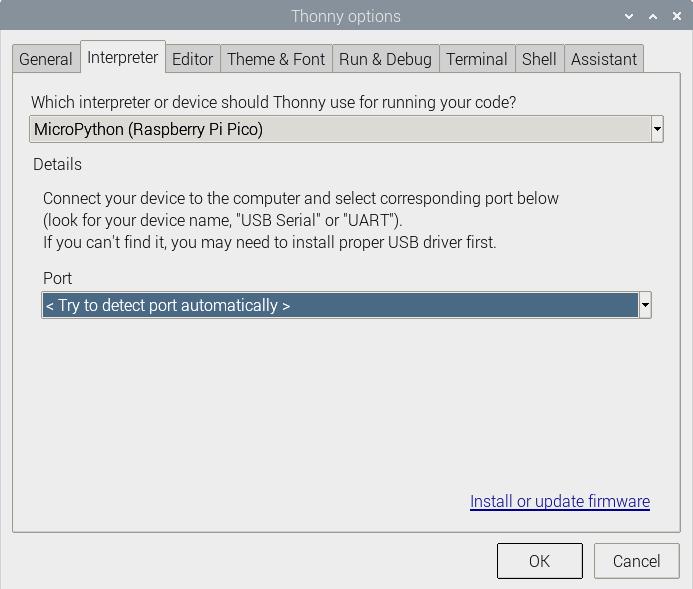 Note: If you are on Linux based OS like the Raspberry Pi, the COM port may show up as tty(AMA0 (/dev/ttyAMA0).

To check if this is working open the Thonny IDE, type the following into the editor. Feel free to adjust the message to whatever you prefer.

Hit the "Run current script" button. In the Shell, you will see the following output. Sweet! 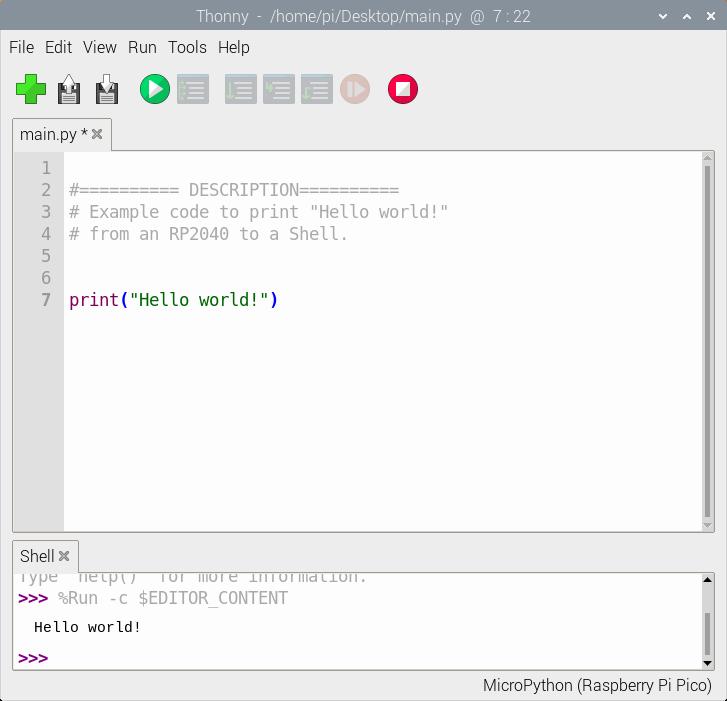 Note: To save the file and have it run every time the board is powered up, simply select File > Save As... from the menu. 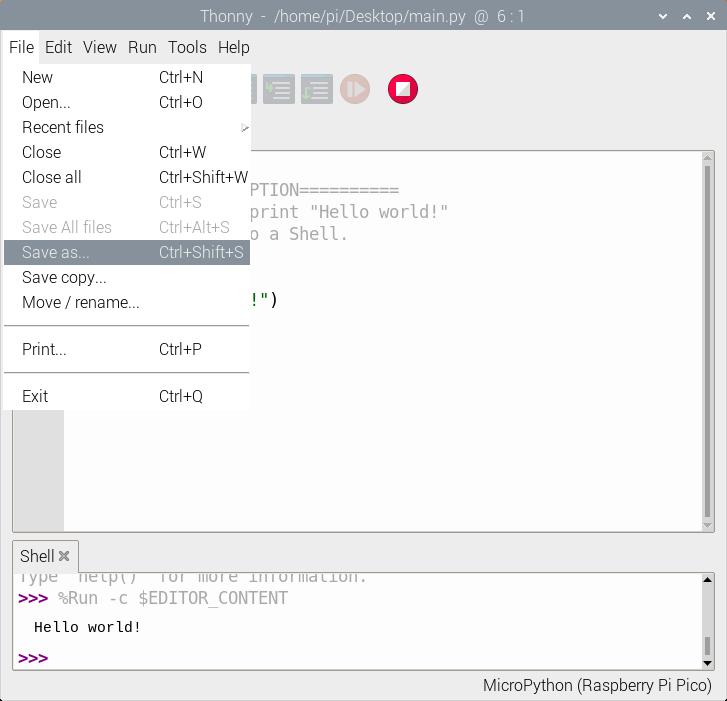 When a window pops up, select Raspberry Pi Pico. 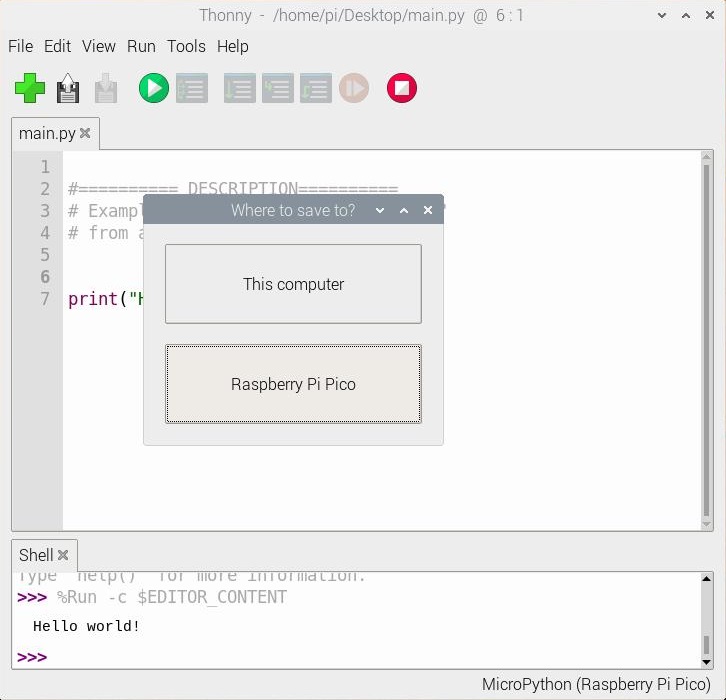 Then save the file as main.py 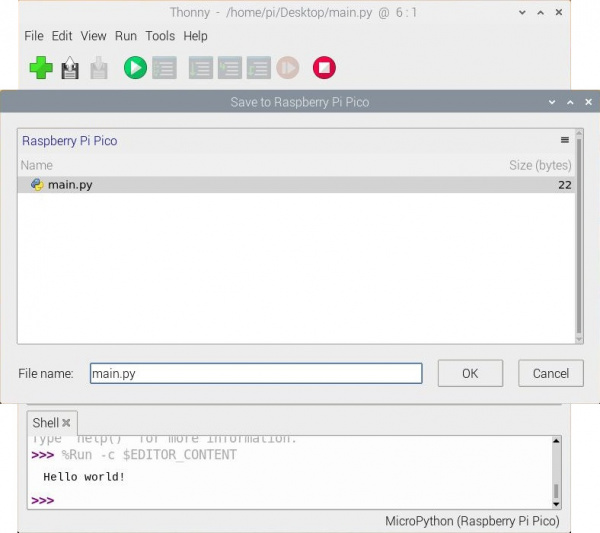 Just make sure to save any code that was edited on your computer (e.g. Save as... > This computer) before closing Thonny. 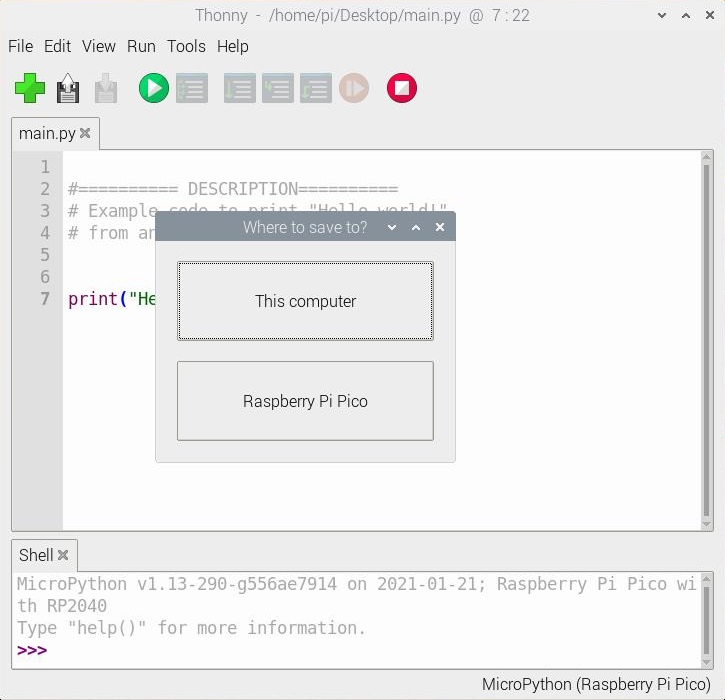 If you have the MicroPython examples saved, head to the following folder in your downloads .../pico-micropython-examples/blink/blink.py . Your code should look like the following. Of course, you can also copy and paste the code provided after the next paragraph as well.

Once you open it in Thonny, adjust the pin number to the GPIO that the LED is connected to. Since we are using the example that was written specifically for the Pico as opposed to the Pro Micro RP2040, we'll need to adjust the pin. In this case, we'll use the RP2040's GPIO17 that is connected to the Qwiic connector so that we do not have to solder pins to the board. This is assuming that we are connecting a current limiting resistor and an LED between the GPIO17 and GND.

Hit the "Run current script" button. Once the code runs, you will see the LED blink. If you want the board to run blink every time the board is powered up, just follow the note provided at the end the previous example. 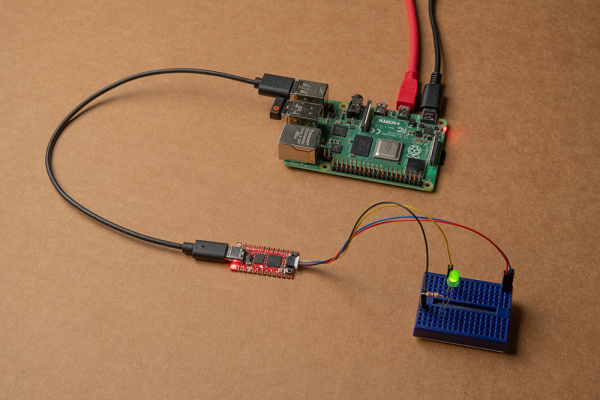 If you have the MicroPython examples saved, head to the following folder in your downloads .../pico-micropython-examples/pio/neopixel_ring/neopixel_ring.py . Your code should look like the following. Of course, you can also copy and paste the code provided after the next paragraph as well.

Hit the "Run current script" button. Once the code runs, it will display each color at "0.2" brightness. The LED will then animate. Since there is only one LED attached, it will look like it will be blinking through the colors. Once the board jumps into the while loop, the LED will begin cycling between colors smoothly. Remember, you can have the board run the example every time the board is powered up by following the note provided in an earlier example.

If you are looking to simplify the code, you can also use the library written for the WS2812. This saves some of the functions in a separate file. Just make sure to adjust the GPIO to connect to the WS2812(s) and the number of LEDs.