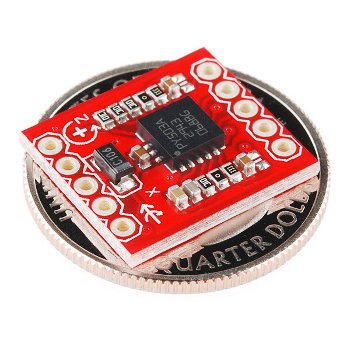 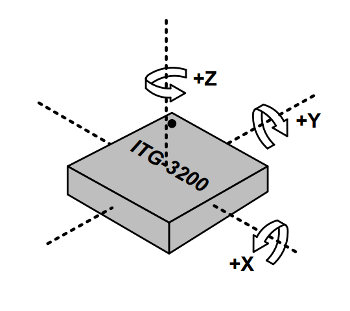 How to Connect to a Gyro

The primary hardware connections to use a gyro are power and a communication interface. As always, refer to the sensor datasheet for all of the information on specifications and example connections.

Gyros can have either a digital or analog communication interface.

MEMS gyros are generally low power devices. Operating currents are in the mA and sometimes &microA range. The supply voltage for gyros is usually 5V or less. Digital gyros can have selectable logic voltages or operate at the supply voltage. For any digital interface, remember to connect 5V to 5V lines and 3.3V to 3.3V lines. Also, gyros with digital interfaces can have low power and sleep modes that allow them to be used in battery powered applications. Sometimes this is an advantage over an analog gyro.

How to Select a Gyro

There are many specifications to consider when figuring out what type of gyro to use. Here are a few of the more important useful ones:

The measurement range, or full-scale range, is the maximum angular velocity that the gyro can read. Think about what you are measuring. Do you need to measure the spin of a record player, which is very slow or a spinning wheel, which could be very fast?

The sensitivity is measured in mV per degree per second (mV/°/s). Don’t let the weird dimension of this value scare you. It determines how much the voltage changes for a given angular velocity. For example, if a gyro is specified with a sensitivity of 30mV/°/s and you see a 300mV change in the output, you rotated the gyro at 10 °/s.

A good rule to remember: as the sensitivity increases, the range decreases. For example, look at the LPY503 gyro datasheet or any gyro with a selectable range:

Notice that with a greater range, the sensitivity suffers and you get less resolution.

As with any sensor, the values you measure will contain some amount of error or bias. You can see gyro bias by measuring the output when the gyro is still. Though you’d think you would see 0° when the gyro is still, you will always see a slight non-zero error in the output. These errors are sometimes called bias drift or bias instability. The temperature of the sensor greatly affects the bias. To help minimize the source of this error, most gyros have a built in temperature sensor. Thus, you are able to read the temperature of the sensor and correct or any temperature dependent changes. In order to correct for these errors, the gyro must be calibrated. This is usually done by keeping the gyro still and zeroing all of the readings in your code.

By now you should know how a gyro works and have a good foundation to start working with a gyro in a project of your own.

Check out these tutorials that use gyros: