Why do we care about power? Power is the measurement of energy transfer over time, and energy costs money. Batteries aren’t free, and neither is that stuff coming out of your electrical outlet. So, power measures how fast the pennies are draining out of your wallet!

Also, energy is...energy. It comes in many, potentially harmful, forms -- heat, radiation, sound, nuclear, etc. -- ,and more power means more energy. So, it’s important to have an idea of what kind of power you’re working with when playing with electronics. Fortunately, in playing with Arduinos, lighting up LEDs, and spinning small motors, losing track of how much power you're using only means smoking a resistor or melting an IC. Nevertheless, Uncle Ben’s advice doesn’t just apply to superheros.

Power is one of the more fundamental concepts in electronics. But before learning about power, there might be some other tutorials you should read first. If you're not familiar with some these topics, consider checking out those tutorials first:

What is Electric Power?

There are many types of power -- physical, social, super, odor blocking, love -- but in this tutorial, we’ll be focusing on electric power. So what is electric power?

In general physics terms, power is defined as the rate at which energy is transferred (or transformed).

So, first, what is energy and how is it transferred? It's hard to state simply, but energy is basically the ability of something to move something else. There are many forms of energy: mechanical, electrical, chemical, electromagnetic, thermal, and many others.

Example electric components, which transfer electric energy to another form.

Energy is measured in terms of joules (J). Since power is a measure of energy over a set amount of time, we can measure it in joules per second. The SI unit for joules per second is the watt abbreviated as W.

It’s very common to see "watts" preceded by one of the standard SI prefixes: microwatts (µW), miliwatt (mW), kilowatt (kW), megawatt (MW), and gigawatts (GW), are all common depending on the situation.

Microcontrollers, like the Arduino will usually operate in the the µW or mW range. Laptop and desktop computers operate in the standard watt power range. Energy consumption of a house is usually in the kilowatt range. Large stadiums might operate at the megawatt scale. And gigawatts come into play for large-scale power stations and time machines.

Electric power is the rate at which energy is transferred. It’s measured in terms of joules per second (J/s) -- a watt (W). Given the few basic electricity terms we know, how could we calculate power in a circuit? Well, we’ve got a very standard measurement involving potential energy -- volts (V) -- which are defined in terms of joules per unit of charge (coulomb) (J/C). Current, another of our favorite electricity terms, measures charge flow over time in terms of the ampere (A) -- coulombs per second (C/s). Put the two together and what do we get?! Power!

To calculate the power of any particular component in a circuit, multiply the voltage drop across it by the current running through it.

Below is a simple (though not all that functional) circuit: a 9V battery connected across a 10Ω resistor. 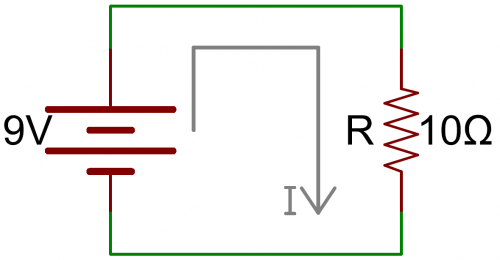 How do we calculate the power across the resistor? First we have to find the current running through it. Easy enough...Ohm’s law!

Alright, 900mA (0.9A) running through the resistor, and 9V across it. What kind of power is being applied to the resistor then?

When it comes to calculating power in a purely resistive circuit, knowing two of three values (voltage, current, and/or resistance) is all you really need. 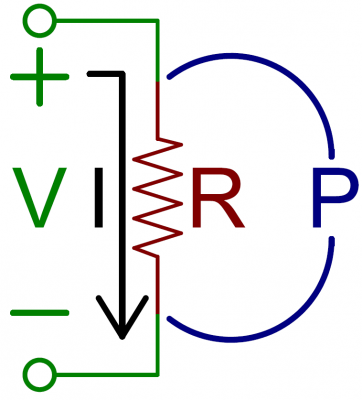 By plugging Ohm's law (V=IR or I=V/R) into our traditional power equation we can create two new equations. The first, purely in terms of voltage and resistance:

So, in our previous example, 9V2/10Ω (V2/R) is 8.1W, and we never have to calculate the current running through the resistor.

A second power equation can be formed solely in terms of current and resistance:

Why do we care about the power dropped on a resistor? Or any other component for that matter. Remember that power is the transfer of energy from one type to another. When that electrical energy running from the power source hits the resistor, the energy transforms into heat. Possibly more heat than the resistor can handle. Which leads us to...power ratings. 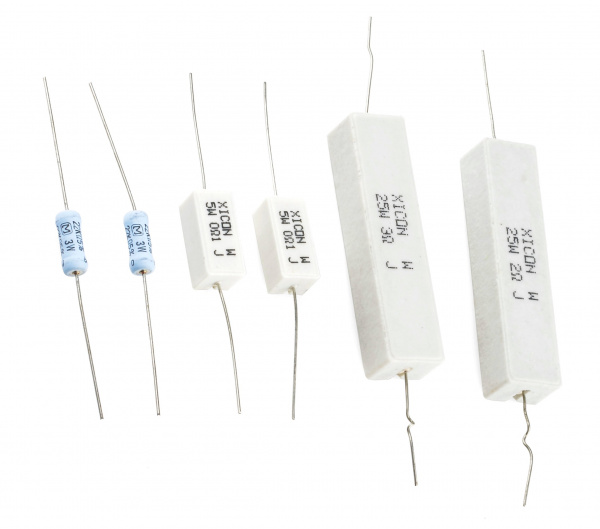 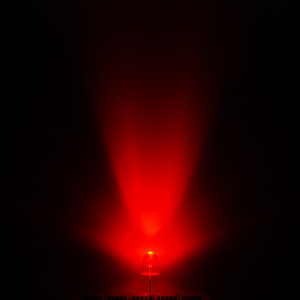 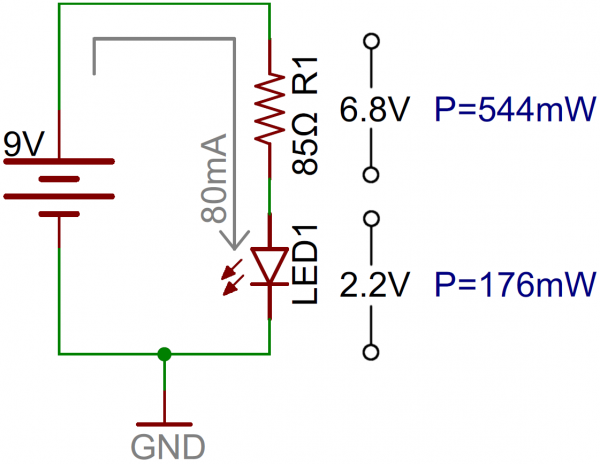 Now that you’re familiar with the concept of electric power, check out some of these related tutorials!