If you need to add user input without using a button, then a capacitive touch interface might be the answer. The AT42QT1010 Capacitive Touch Breakout offers a single capacitive touch button with easy-to-use digital I/O pins.

The AT42QT1010 is a dedicated, single-button capacitive sense chip. The chip handles monitoring a conductive area for touch. As long as a touch (e.g. from a finger) is detected, the AT42QT1010 keeps the output line high. Otherwise, the line is kept low. You just need to provide a power source (1.8V - 5V) and ground for the AT42QT1010 to work. SparkFun's breakout board contains an on-board electrode capable of detecting touches. Additionally, a PAD pin is available if you would like to create your own external electrode.

This tutorial will show you how to connect the AT42QT1010 Breakout Board to an Arduino along with some example code to read the board's output. Additionally, alternative ways to use the board will be shown, such as mounting it to an acrylic panel and creating your own capacitive sensing pad.

How to strip, crimp, and work with wire.
Favorited Favorite 40

What is this 'Arduino' thing anyway? This tutorials dives into what an Arduino is and along with Arduino projects and widgets.
Favorited Favorite 42

A tutorial on electronics' most overlooked and underappreciated component: the switch! Here we explain the difference between momentary and maintained switches and what all those acronyms (NO, NC, SPDT, SPST, ...) stand for.
Favorited Favorite 47

Learn the basics about LEDs as well as some more advanced topics to help you calculate requirements for projects containing many LEDs.
Favorited Favorite 61 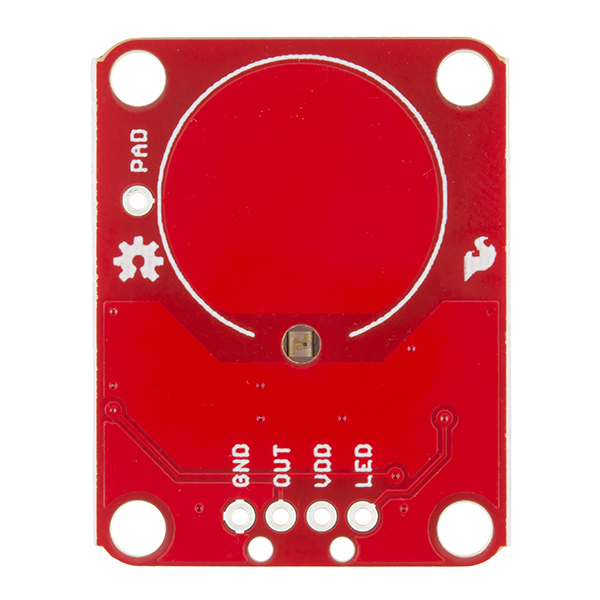 Take a look at the back side of the board. 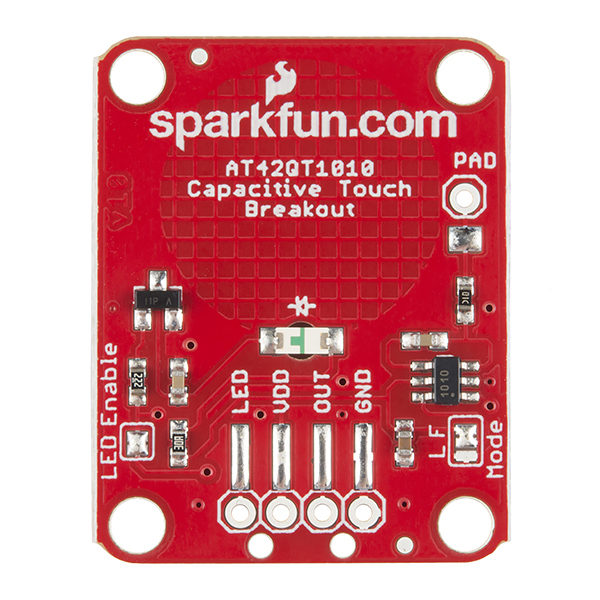 The AT42QT1010 chip is located on the right side of the board. It uses a resistor and a capacitor network to adjust the sensitivity of the electrode. High frequency pulses are sent to the pad. When a fleshy object (such as a finger) approaches the pad, it acts like a very small capacitor and changes the shape of the pulses. When the AT42QT1010 detects these slight changes, it raises the OUT line to HIGH, indicating a touch is present. Once the pulses return to normal (i.e. the fleshy object is moved away from the pad), the AT42QT1010 drives the OUT line LOW.

The output from the AT42QT1010 goes directly to the OUT pin on the board as well as to the transistor (left side), which operates the LED (center of board). By default, the OUT line and LED lines are connected, which means that on a touch, the on-board LED lights up. You can disconnect the LED by de-soldering the jumper labeled "LED Enable." This will cause the LED to no longer light up on a touch, but you can still drive the LED using the LED pin on the board.

On the right side of the board, you will also notice a jumper labeled "Mode" with "L" and "F" markers. By default, the center pad and the "F" pad are connected, which puts the AT42QT1010 in "Fast" mode. In Fast mode, the chip is more responsive to touch events but draws 200µA - 750µA in normal operation. If you de-solder this jumper and connect the center pad to the "L" pad, the AT42QT1010 will be in "Low Power" mode. In this mode, the chip is slightly less responsive to events but only uses 15µA - 75µA. 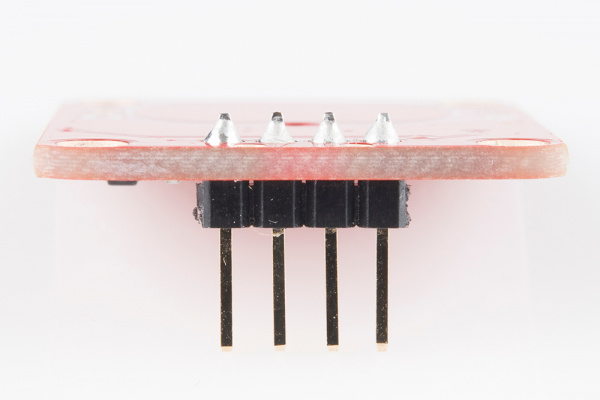 On the other hand, if you wish to mount the AT42QT1010 to a panel, you can solder a 4-pin male header to the SMD pads. 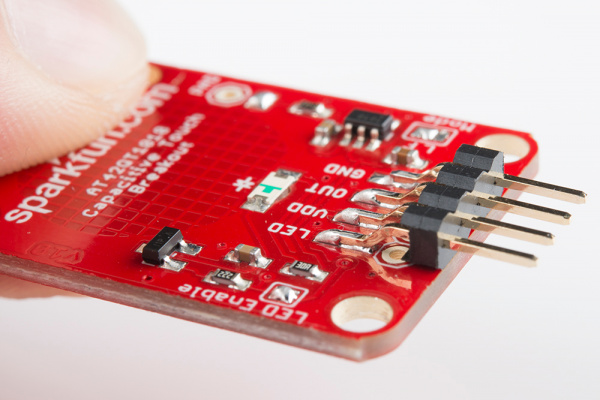 Connecting the AT42QT1010 Breakout Board 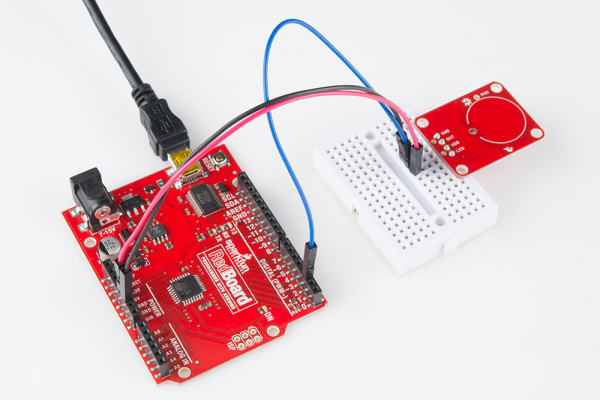 Mounting the AT42QT1010 Breakout Board 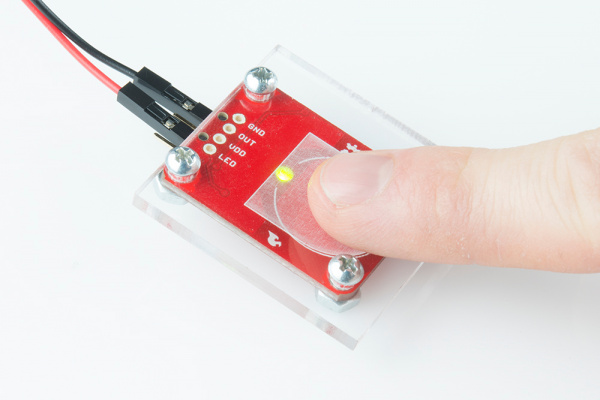 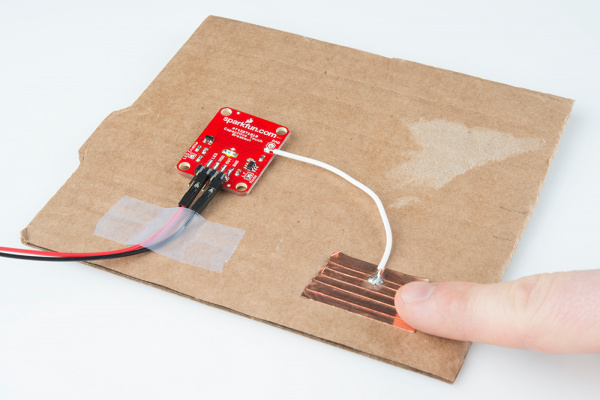 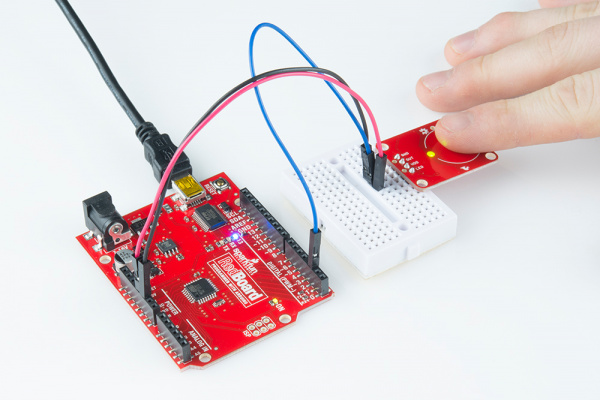 The AT42QT1010 is a great way to add a single capacitive touch button to a project. For example:

If you need more than one capacitive touch button in your project, you might want to look at some other products: