The pyboard is a powerful microcontroller board designed to run MicroPython code that also happens to be conveniently compact. There is a pyboard can be sold without headers and with headers. 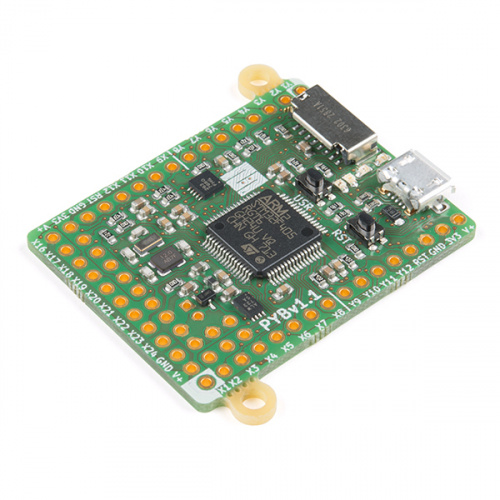 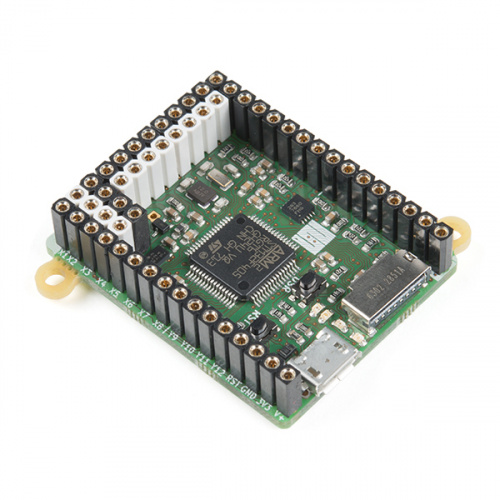 Here is great video tutorial from MicroPython on getting started with your pyboard:

Easily control the following peripherals using the the pyb module's built-in classes for: 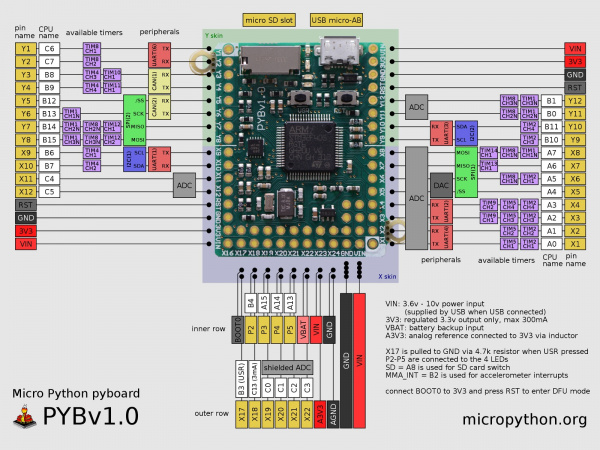 Click the image for a closer look. Image courtesy of micropython.org

The pyboard has four LEDs. We are going to use the REPL to interactively determine how these LEDs are numbered and what color they are. The LEDs are also indicators for the current state of the board. Here are some examples of what you might see: 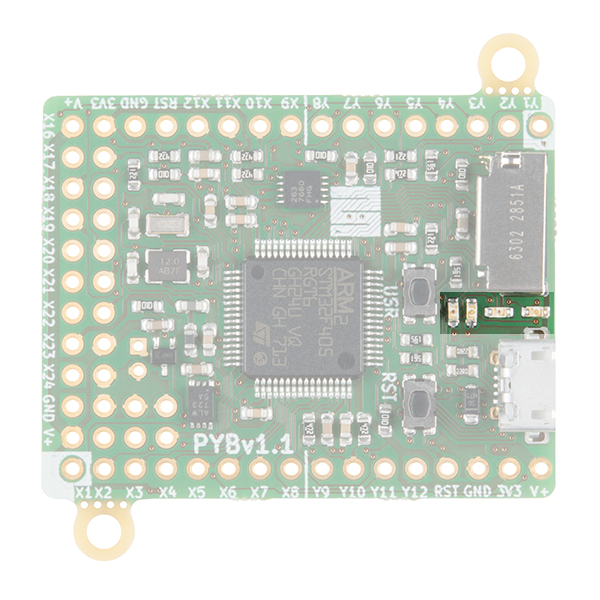 There are two switches, one labeled "USR" for user and the other "RST" for reset. Micropython handles switch input very easily on this board and we will use the USR switch to prove it. The Switch class has three methods that allow you obtain the switch state or register when there has been a change in the switch state. 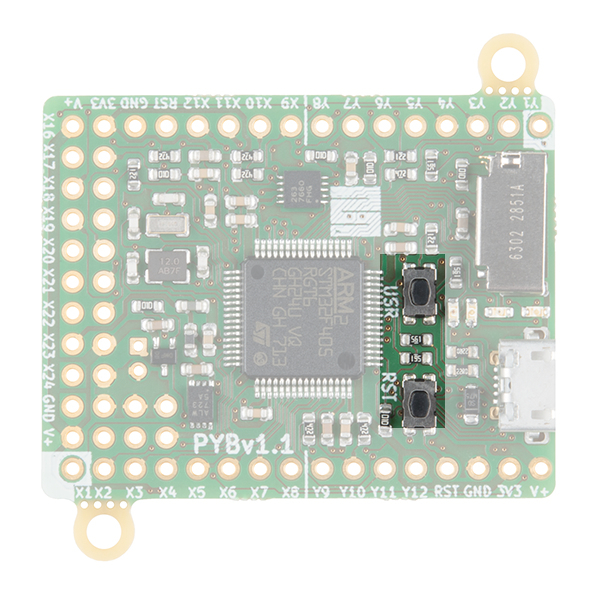 There is a drive on the pyboard called /flash. When an microSD card is inserted this drive becomes available as /sd. 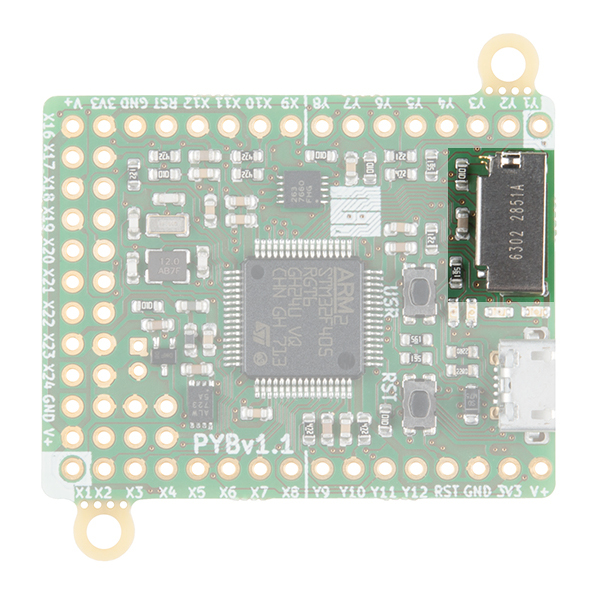 The pyboard has an accelerometer-MMA766FC that can be used to detect the angle and motion of the board. The Accel class of the pyb module has five methods which allow you get the x, y, z axis info, access the tilt register, and a 3-tuple of x,y,z values. 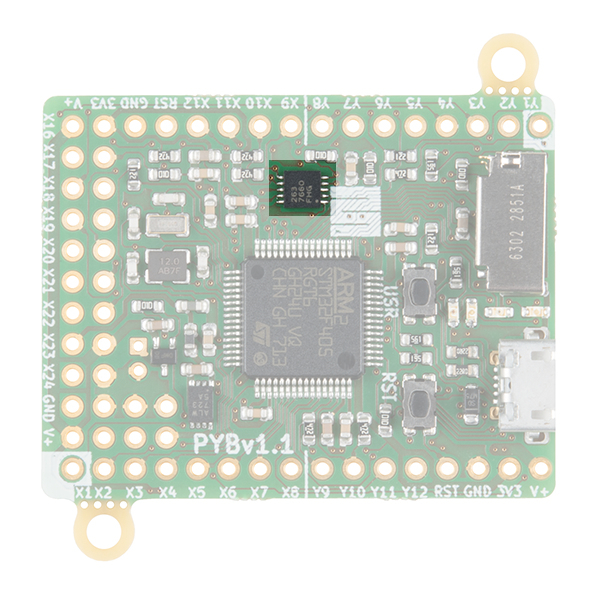 Getting Started with MicroPython for Pyboard

You can control your pyboard in two ways:

For more information on these methods, check out the sections below!

A cool feature of the pyboard is that you can write Python scripts in any text editor and save the file directly to the pyboard drive. No IDE is required! Let's explore the pyboard, control some peripheral, and do some experiments.

Let's start with some code. We are going to turn on all the onboard LEDS one by one and figure out which one is which.

Connect the pyboard to a computer's COM port using a USB cable. Navigate to the drive called "PYBFLASH". Open main.py in a text editor of your choice. Once opened you should see this:

Let's turn on LED 1 and make a note of its color and location.

Save the file to the drive - don't change the name. For the script to run you must first reset the board. It is recommended you safely remove the hardware first by ejecting the drive from your computer and then press the RST button. Which LED is on and what color is it?

Note: If you do not follow these steps to safely remove the hardware from your computer, it will become corrupt and a hard reset will be mandatory.

Now run through that same code three more times but change the number within the parenthesis after LED.

In this example, we will toggle each of the onboard LEDs! Go to the PYBFLASH and open main.py in a text editor. Copy the code below.

Save main.py in the PYBFLASH drive. The red LED will be on while the program loads. After the LED is turned off, eject the PYBFLASH and then press the RST button. Your program will now execute. This is the process for loading a new script.

PWM and LED 4: The Blue One is Special

LED 4 is the blue LED towards the edge of the pyboard. This LED can be controlled through PWM. In the pyb module LED class, there is a method called intensity. When called it looks like pyb.LED.intensity([value]) where value is a number between 0-255.

In this example, we will change the intensity of the LED. Go to the PYBFLASH and open main.py in a text editor. Copy the code below.

There are four dedicated 3-pin headers labeled X1, X2, X3, & X4. You can drive up to four hobby servo motors. At the top of the row is GND, the middle of the row is VCC and the bottom row are the 4 PWM signal lines. Once you've got a servo hooked up, we can look at what we can do within the Servo Class. 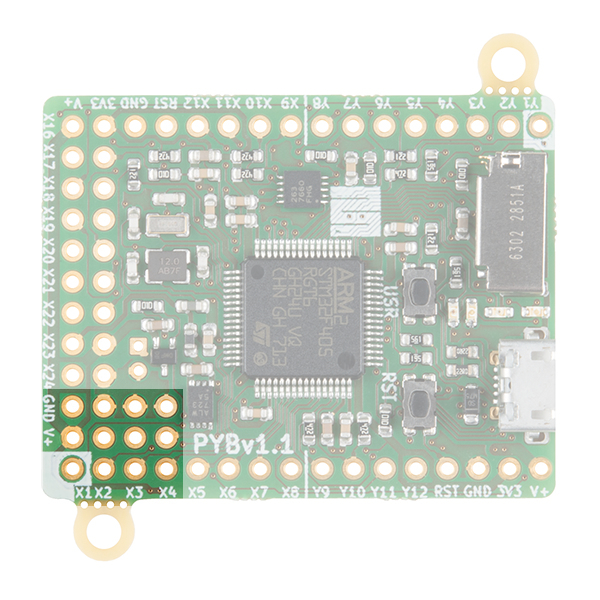 For this example, we will be using a generic sub-micro hobby servo and some jumper wire with pins. Assuming that headers are soldered on the board, connect the servo to the respective pins.

Follow the steps to load the python script again using the code below.

Once the script is loaded, the servo connected to pin X1 will sweep between two positions and stop.

Another method of controlling the pyboard is using the REPL. REPL stands for Read Evaluate Print Loop. It is an interactive command prompt from a serial terminal that allows access to your pyboard. It is an easy way to iteratively write and test code. Once you've got your code hammered out, you can copy it into main.py to run without a computer. Before we are able to use the REPL, we must install the drivers for your operating system.

This process has worked best on a computer with Windows 7. Unfortunately, it doesn't seem there is support for Windows 10 yet.

To install this driver you need to go to your computer's Device Manager, find the pyboard USB in the list of ports (it should have a warning sign next to it because it’s not working yet), right click on the device, select Properties, then Install Driver. You need to then select the option to find the driver manually (don’t use Windows auto update), navigate to the pyboard’s USB drive, and select that. It should then install.

After installing, go back to the Device Manager to find the installed pyboard, and see which COM port it is (e.g. COM3). More comprehensive instructions can be found in the Guide for pyboard on Windows. Please consult this guide if you are having problems installing the driver.

Simply open a terminal and run:

When you are finished type "CTRL -A CTRL-\" to exit.

The 0 at the end there may need to be updated to 1 or higher and you may need the correct permissions to access this device. So try Sudo.

Now that you have installed the drivers we can start working with the pyboard within an interactive serial terminal. In this example, we will be using Putty on a Windows OS. To connect the pyboard to the right port, open Device Manager and look under "Ports".

Open your favorite serial terminal and configure the settings to connect. Make sure on the "Serial line" you specify the correct port. 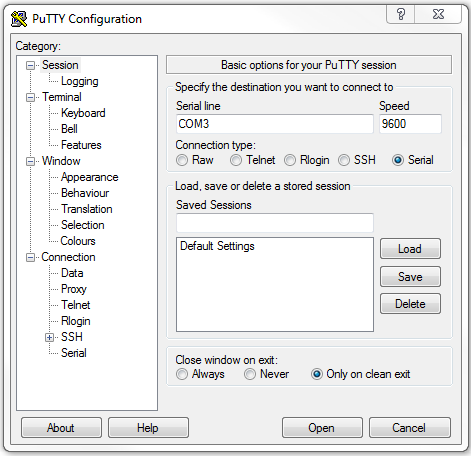 Once Putty has been configured, click on the Open button. 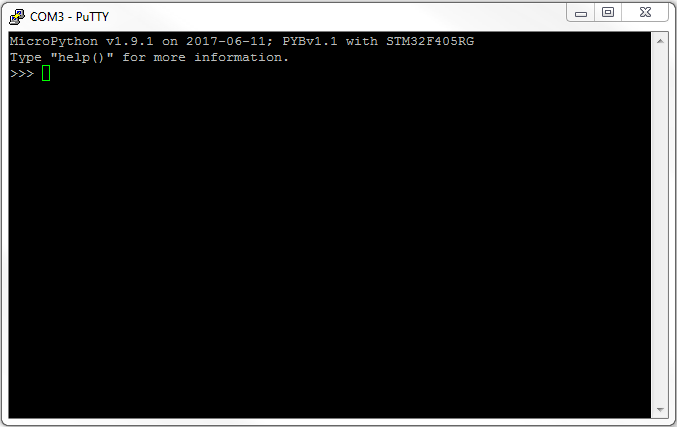 As a good first step, let explore the help() menu. Type the command into the serial terminal and hit enter. 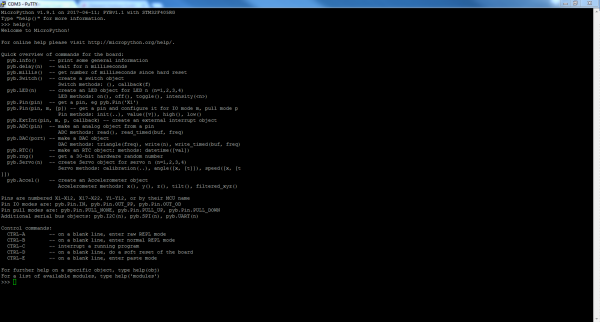 Let's explore some things from here.

Playing with the Onboard LEDs.

In your terminal type:

You'll see each LED turn on as you enter a new line in the terminal.

The switch class makes it easy to obtain a switch state. From the terminal:

The accelerometer y, y, z methods return a signed number between -30 and 30. There are a few methods we can call here to obtain values from the accelerometer.

The corresponding x-value will be returned.

The corresponding y-value will be returned.

The corresponding z-value will be returned.

This will return a list of comma separated x, y, and z values.

Now that you've successfully got your pyboard up and running, it's time to incorporate it into your own project!