Choosing a Power Supply and Speaker(s)

As mentioned in the previous section, the Noisy Cricket has an output power of up to 300mW/channel in stereo operation, and 1.5W in mono. The power output depends on not just the output load, but the power supply as well. Borrowing a few graphs from the datasheet should help us understand our power supply and speaker selection. 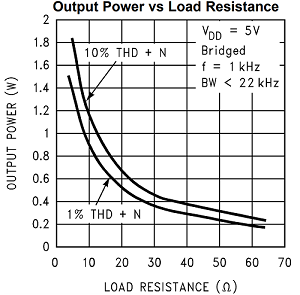 In the first graph we see the effect that the load (speaker) has on the output power available. As we can see, there is an inverse relationship between the load resistance and the output power. To get the most out of the Noisy Cricket, it's recommended to use a 4Ω speaker in mono operation and an 8Ω in stereo. 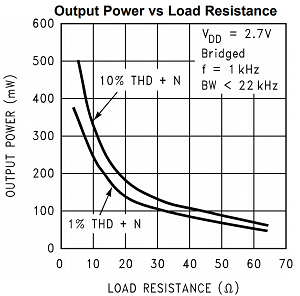 This next graph we're still looking at the output power versus the load resistance, but instead of the power being measured in watts, it's in milliwatts. So what gives? The variable that was changed was the supply voltage, VDD. In the first graph, VDD was equal to 5V, and the second VDD is set to 2.7V. With approximately half the voltage, the output power is around four times less with the same load. While the amplifier functions down to 2.4V, it will mean that you have less output power available if your load resistance remains constant (thanks to ohm's law). To see the full effect the supply voltage has based on a few of the more common loads refer to the graph below. 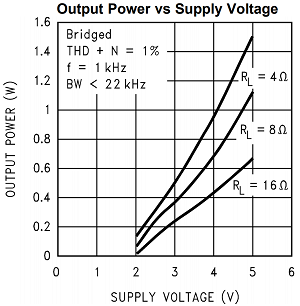 With these graphs in mind and maximize the power output, we recommend a power supply voltage of 5V with a current rating of at least 100mA. For the stereo amplifier, use 8Ω speakers. For a mono amplifier, use a 4Ω speaker.