There are all sorts of capacitor types out there, each with certain features and drawbacks which make it better for some applications than others.

When deciding on capacitor types there are a handful of factors to consider:

The most commonly used and produced capacitor out there is the ceramic capacitor. The name comes from the material from which their dielectric is made. 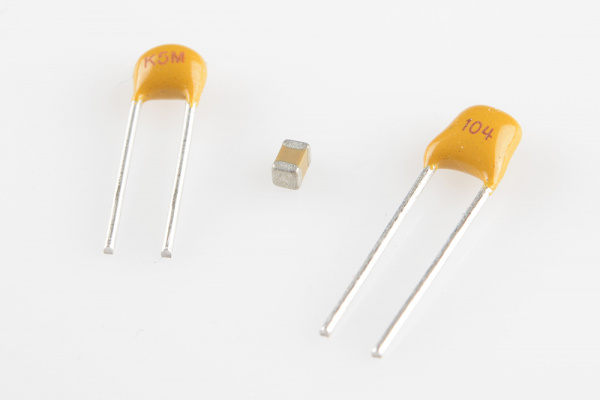 Compared to the equally popular electrolytic caps, ceramics are a more near-ideal capacitor (much lower ESR and leakage currents), but their small capacitance can be limiting. They are usually the least expensive option too. These caps are well-suited for high-frequency coupling and decoupling applications.

Electrolytics are great because they can pack a lot of capacitance into a relatively small volume. If you need a capacitor in the range of 1µF-1mF, you're most likely to find it in an electrolytic form. They're especially well suited to high-voltage applications because of their relatively high maximum voltage ratings.

Aluminum electrolytic capacitors, the most popular of the electrolytic family, usually look like little tin cans, with both leads extending from the bottom. 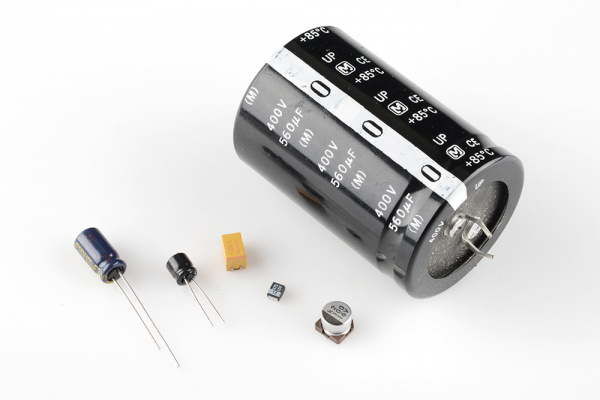 An assortment of through-hole and surface-mount electrolytic capacitors. Notice each has some method for marking the cathode (negative lead).

These caps also notorious for leakage -- allowing small amounts of current (on the order of nA) to run through the dielectric from one terminal to the other. This makes electrolytic caps less-than-ideal for energy storage, which is unfortunate given their high capacity and voltage rating.

If you're looking for a capacitor made to store energy, look no further than supercapacitors. These caps are uniquely designed to have very high capacitances, in the range of farads.

A 1F (!) supercapacitor. High capacitance, but only rated for 2.5V. Notice these are also polarized.

While they can store a huge amount of charge, supercaps can't deal with very high voltages. This 10F supercap is only rated for 2.5V max. Any more than that will destroy it. Super caps are commonly placed in series to achieve a higher voltage rating (while reducing total capacitance).

The main application for supercapacitors is in storing and releasing energy, like batteries, which are their main competition. While supercaps can't hold as much energy as an equally sized battery, they can release it much faster, and they usually have a much longer lifespan.

Electrolytic and ceramic caps cover about 80% of the capacitor types out there (and supercaps only about 2%, but they're super!). Another common capacitor type is the film capacitor, which features very low parasitic losses (ESR), making them great for dealing with very high currents.

There's plenty of other less common capacitors. Variable capacitors can produce a range of capacitances, which makes them a good alternative to variable resistors in tuning circuits. Twisted wires or PCBs can create capacitance (sometimes undesired) because each consists of two conductors separated by an insulator. Leyden Jars -- a glass jar filled with and surrounded by conductors -- are the O.G. of the capacitor family. Finally, of course, flux capacitors (a strange combination of inductor and capacitor) are critical if you ever plan on traveling back to the glory days.