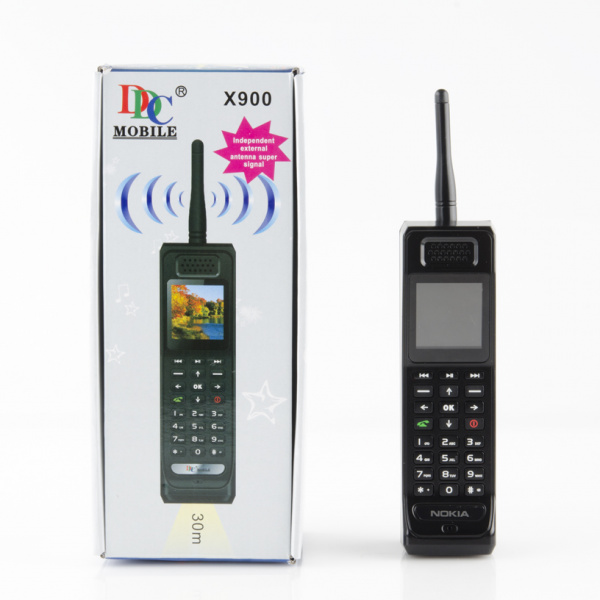 On a recent trip to China, our fearless leader encountered a very special mobile device. It has a shape like none other, It's in a weight class of its own, and it has a camera and flashlight that you normally wouldn't find on a cellphone. On top of all that, it's solid like a... well... like a brick. And as we took it apart we were greeted by all kinds of surprises!

Join me as I find out what space-age technology is hidden within this mighty chunk of phone!

Before we tear into this beauty, let's take a moment to explore the bells and whistles. The box advertises large "streo" speakers and a strong flashlight that "can as 30 meters." Not only that, but it "suppore Multi-languagse," and, most importantly of all: " sbook."

Pop open the box and you're presented with the following: 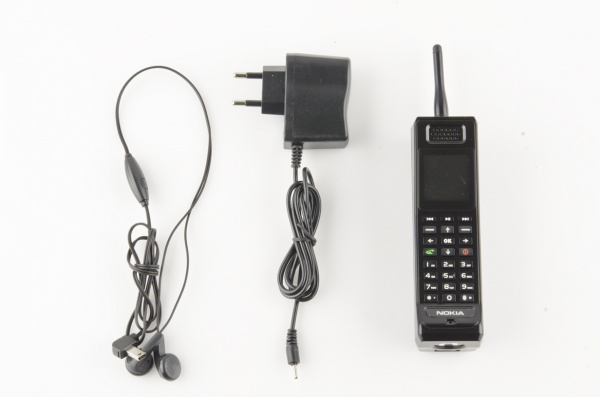 On the left, you'll notice this phone comes with its own very sporty headset. Featuring two hard plastic earbuds, something vaguely microphone shaped and a buttonesque protrusion. Whereas many phones would try to squeeze all of this functionality through a useless audio jack, the X900 rather cleverly (mis)uses a USB mini-B connector.

You may be thinking, at this point, "if that USB mini-B port is for the headset then how do I charge it?" No worries! Provided you have access to a wall outlet and the proper adapters for your country, the included charger fits snugly into the tiny barrel jack connector just above the USB port.

And finally we come to the phone: 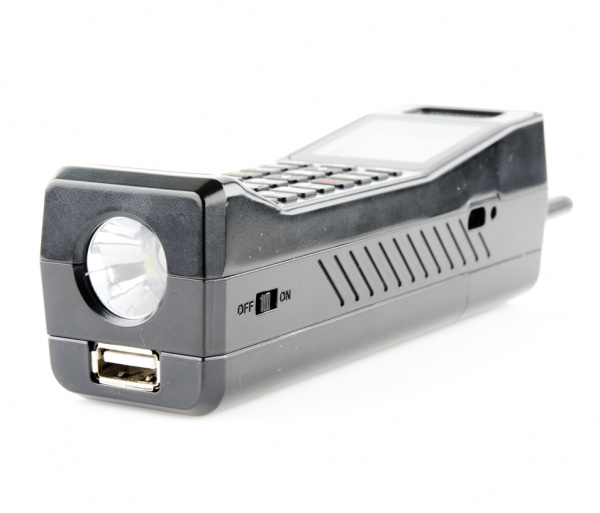 I can hear you. You're saying, "Please tell me that's a massive, but somewhat dim, LED flashlight." Oh, you're darn skippy it is. And turning it on is as easy as pressing the "Unique flashlight push switch" into the on position or, one imagines, leaving the phone in your purse or pocket.

Just below that, you'll notice a full-on USB-A charging port. Not so you can charge the phone but so that the phone can charge other things... not a bad trick if you have the battery to back it up. Speaking of which, let's have a look at that battery: 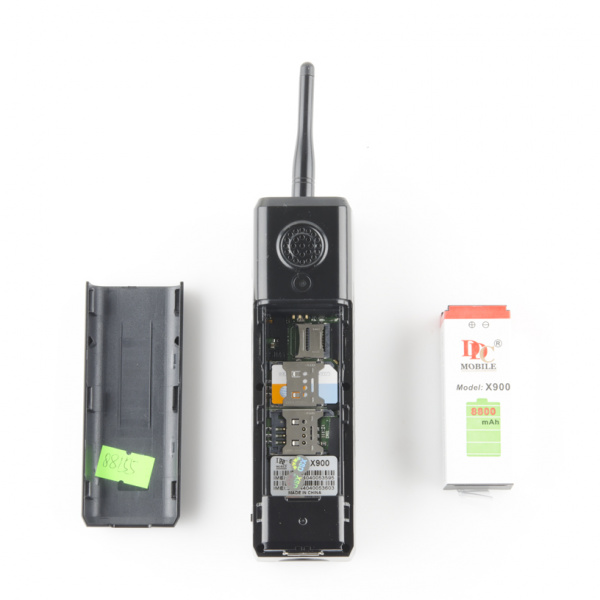 Sliding off the back cover, you notice that the battery is a massive brick. You're quickly distracted, however, by the strange mess underneath: 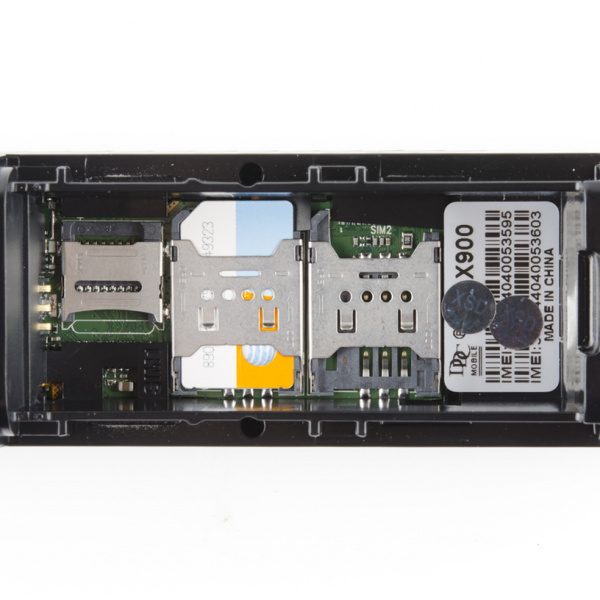 Oh yes. Two SIM card slots and one SD storage slot. This is a spy phone, for sure, just like 007 might carry. But finally I think it's time to get to the important part: the operating system. 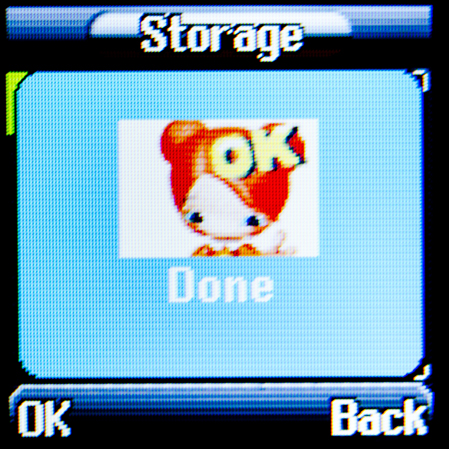 Okay, it isn't without its quirks but a little bit of exploration will turn up the games directory: 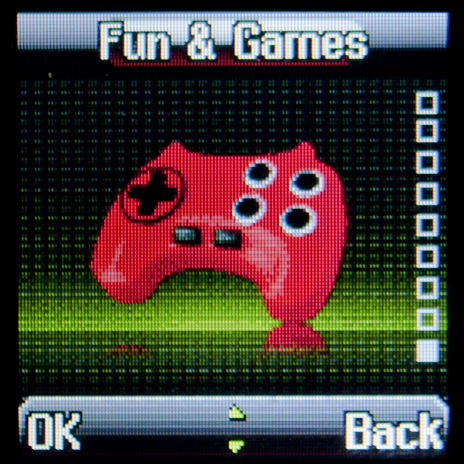 The phone comes with only one game, because you only need one game. And that game is... well, I don't really know what it's called or how to play it. It features a Panda that doesn't like bugs one single bit: 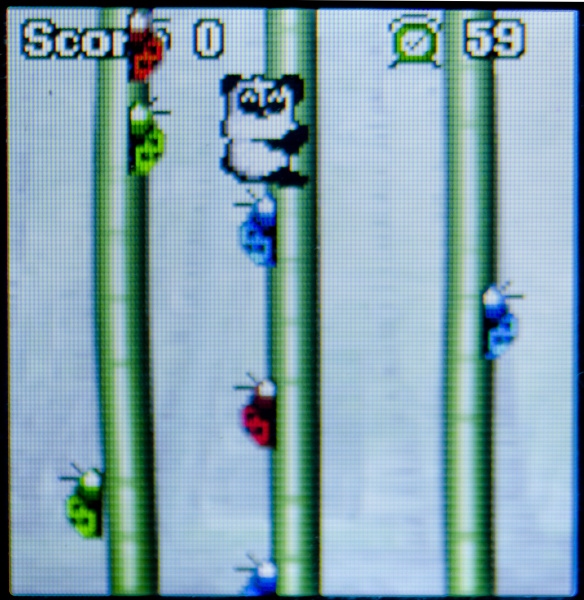 Okay, enough of this. There must be more to this phone and the only way to find out is to get it open!

The first thing that you'll notice when you pick up an X900 is the immense weight. This phone feels solid, and parts of it really are. But where is all of that weight coming from? Let's find out: 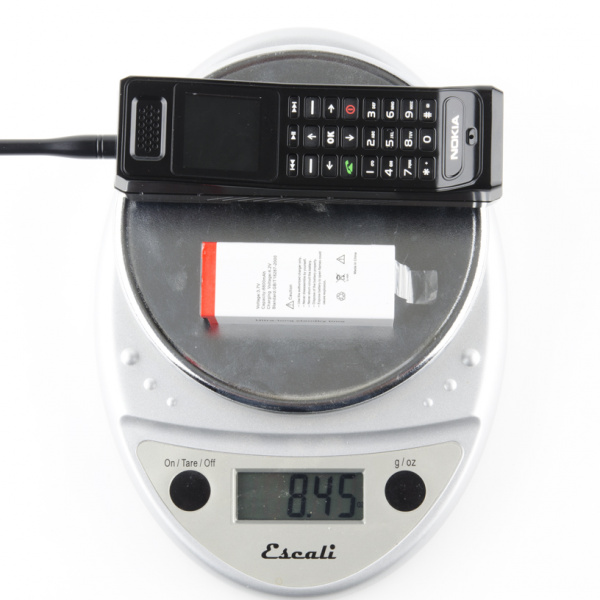 As you can see, the phone and battery together weight a whopping 8.45 ounces. By comparison, the iPhone 5s in its entirety weighs only 3.95 ounces. Perhaps this weight discrepancy can be explained by the massive "8000 mAh" battery brick: 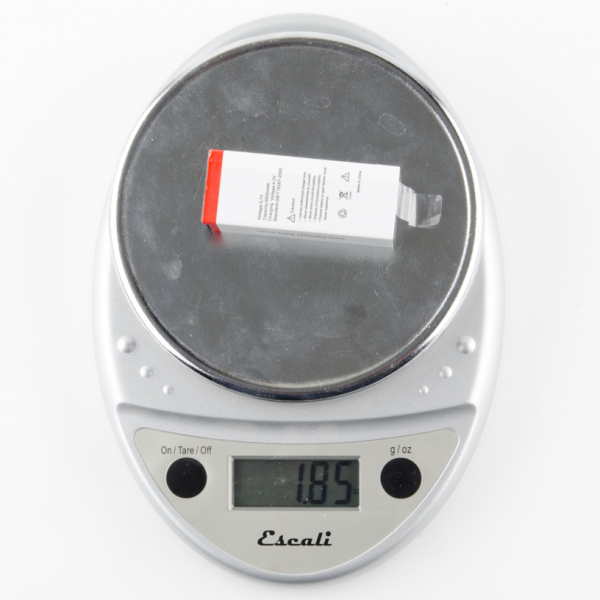 Uh... hmm... Let's start pulling the phone apart then and see if maybe the unusually large and capable flashlight is responsible for the added mass: 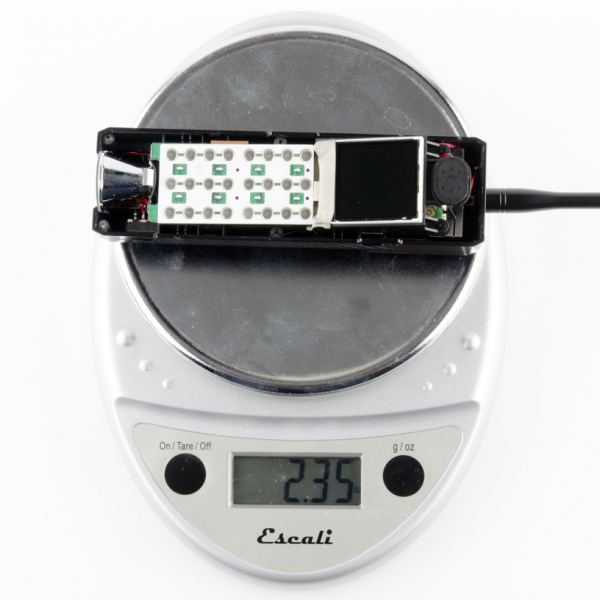 Well it isn't in there... But wait that only leaves one place that the weight could be hiding... 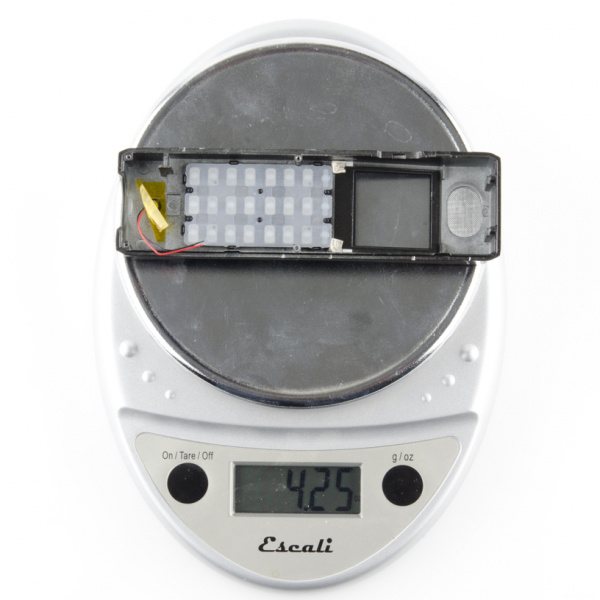 That's right. The front panel of the X900 is cast from pot metal and weighs, on its own, a quarter of an ounce more than the iPhone 5s. This isn't looking good. In fact, now that I think about it that battery seems really light. What was the capacity on that thing? 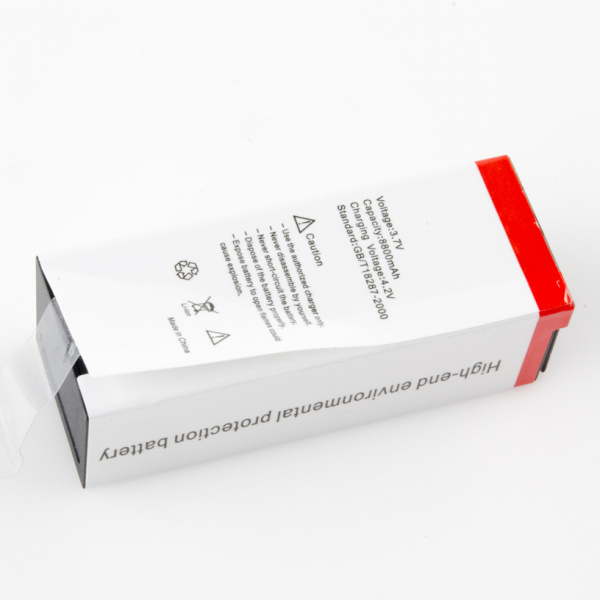 Well, it says 8800mAh at 3.7V but I've handled quite a few batteries and I just don't see that being true. Normally, I wouldn't advise tearing into a cellphone battery but I had a really good feeling that as soon as the sticker was torn away I might be presented with... well... this: 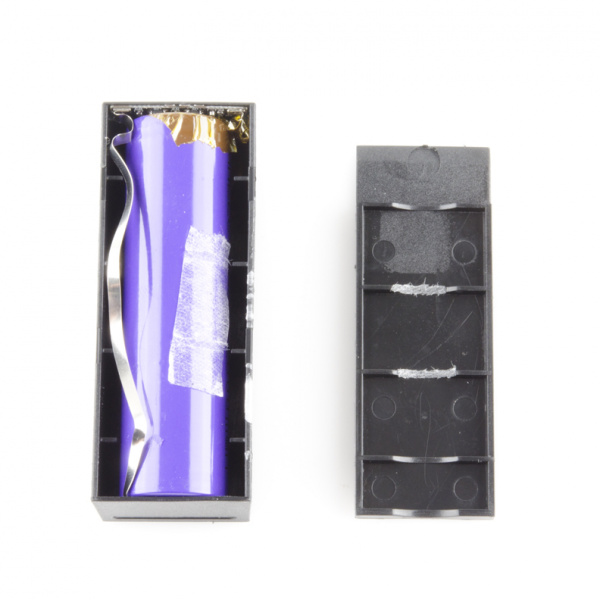 That's an 18650! It's a common cylindrical Li-ion battery, it is indeed rechargeable, but it packs only 2000mAh. That's less than a quarter of the advertised capacity. 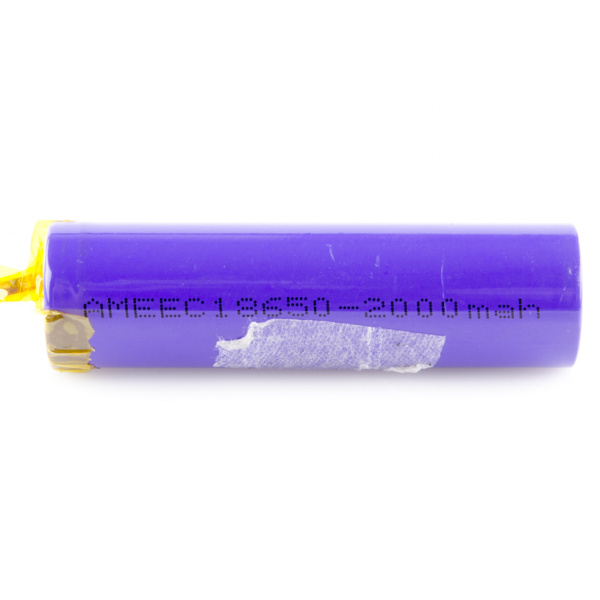 Let's dig a little deeper, this is getting interesting... 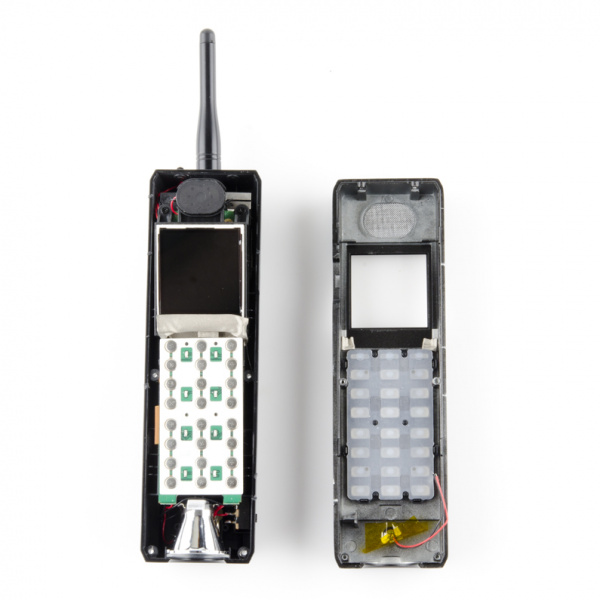 Now that we know the dumb bit on the right is much much heavier than the smart bit on the left, let's find out just how smart that "smart bit" is. 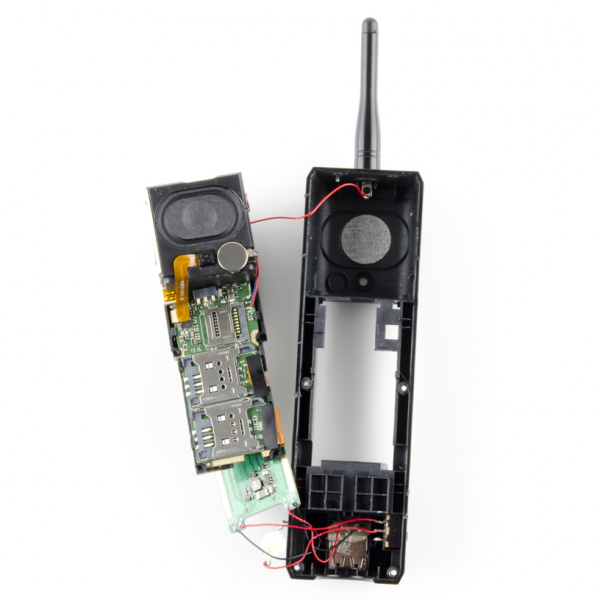 After snipping a few wires, the main board of the phone frees itself from the frame without much trouble. You'll notice that the main board is wired to all sorts of things including the antenna, the flashlight and the USB charging port using some flimsy bits of wire. It's worth mentioning at this point that the flashlight is really just an LED with some heatsink material behind it wired directly to the power rail through a slide switch. 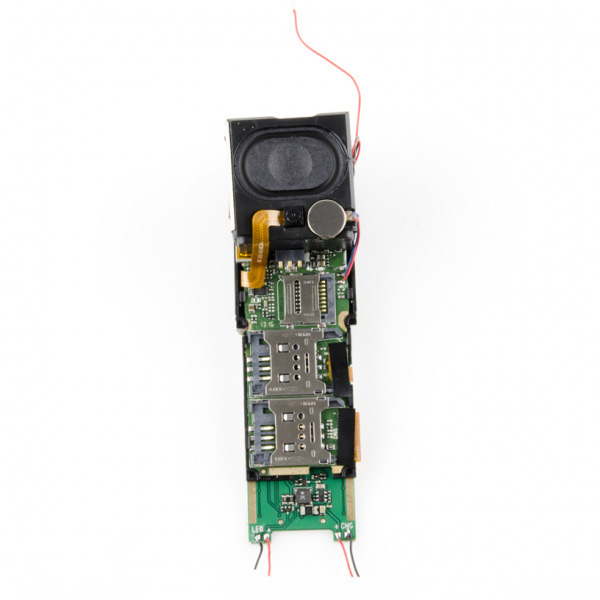 If this is the speaker that the box brags about then the box is half right. It's a 'large speakers' but it is most definitely not a 'streo speakers.' Let's flip it and check out the keypad. 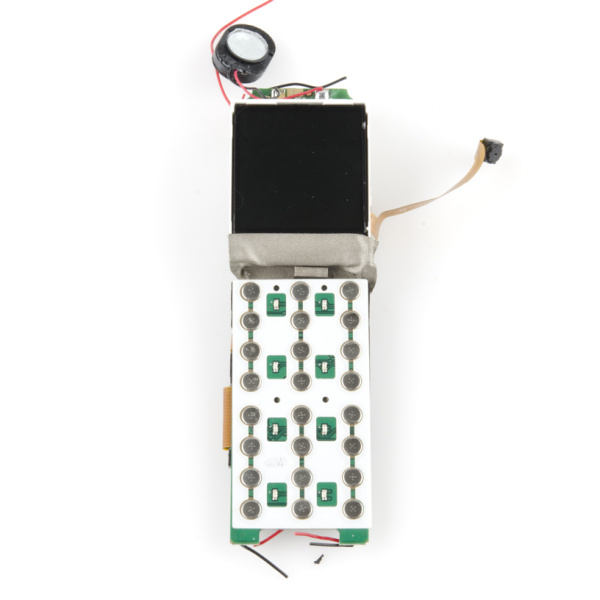 That's definitely a pretty standard keypad, but wait a second... what's this underneath? 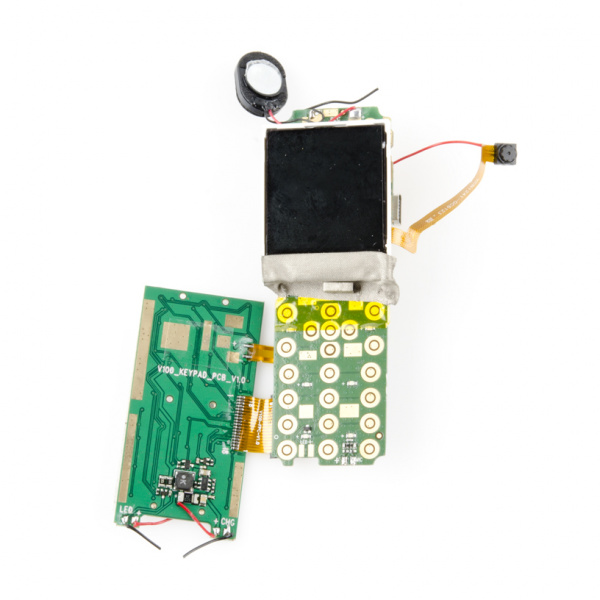 What the heck? It's a secret keypad. I told you this was some kind of spy phone. I'm assuming what happened is that the fine folks at DDC Mobile bought a bunch of phone boards and a bunch of rubber keypads but they weren't compatible... so they had to stuff in another board to match them up. 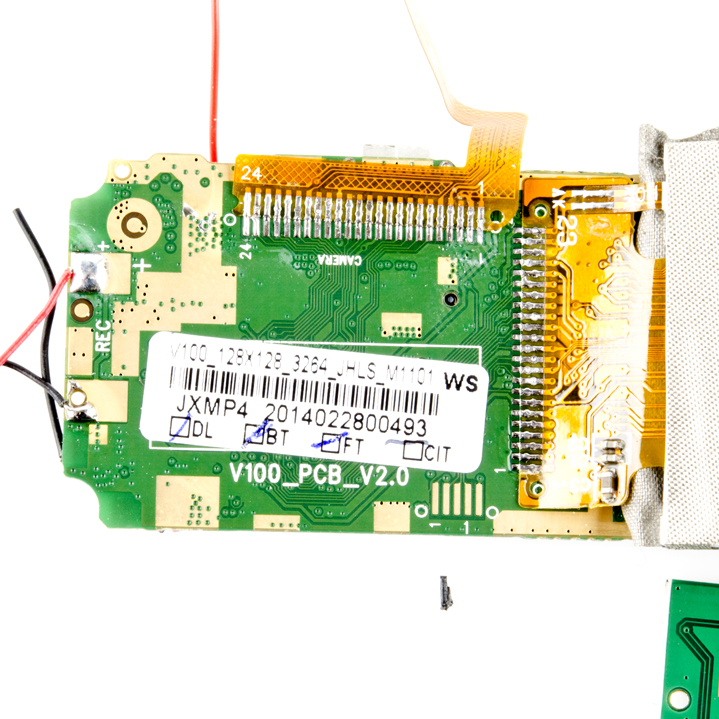 So... there's a sticker. I was really hoping it would hold some clues for me but I don't know how to decipher this at all. This is V2.0 of the board, though, so there must have been one worse. That's progress of a sort.

I guess we've seen the dirty truth, but we can't know the whole story until we get a handful of datasheets. Let's start looking for part numbers: 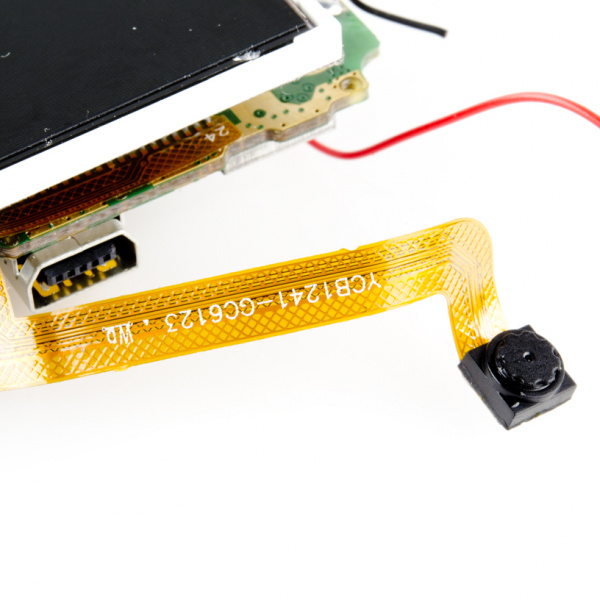 Found one! The silkscreen on this camera module turned up the datasheet for an image sensor called the GC6123. An image sensor that must be in demand these days with its whopping 240x320 pixel resolution. That's a small fraction of a megapixel! 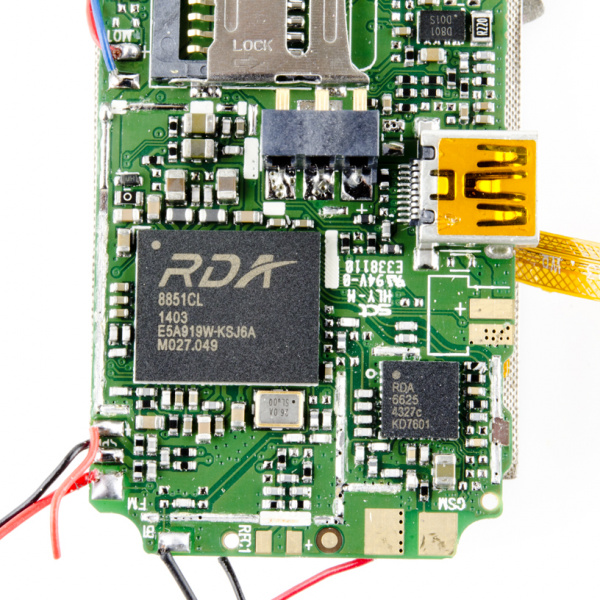 Ah ha! The brains of the operation! Both of the ICs pictured above are made by the same company: RDA microelectronics. This is the first time I've ever had trouble searching for a datasheet because the part number brought back more forums than anything. Forums full of people trying to get tools and firmware to reprogram the chips in order to make cheap phones and clone IMEIs. Apparently, the RDA8851C is a very popular controller in these inexpensive Chinese cellphones. And why wouldn't it be? Integrated flash on chip, camera interface, keypad scanner, quad-band integrated transceiver... in a way, this thing is the phone.

The only component that doesn't seem to be integrated? The front-end RF module. That's where the RDA6625 steps in.

Okay, we kind of get how the phone works now but let's revisit the battery. Truth be told, that 18650 wasn't the only thing in the battery enclosure. I also found this: 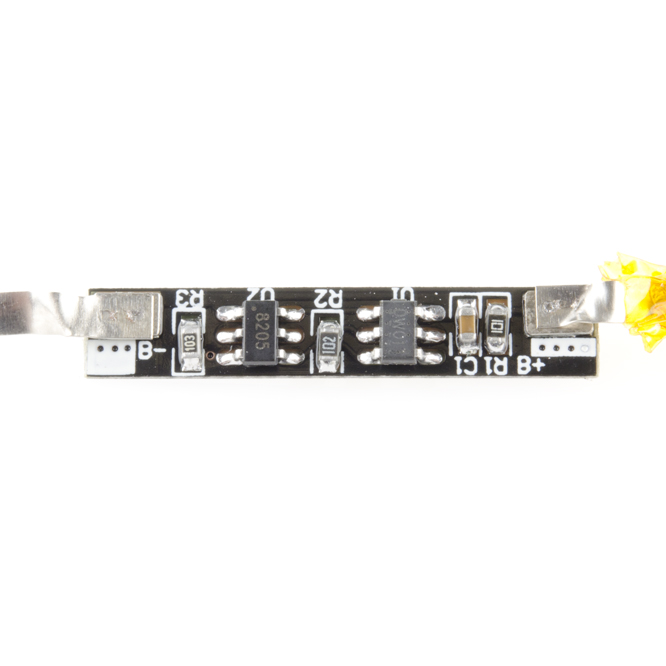 A board containing a pair of battery protection ICs:

The S8205, which protects multiple cells from overcharge, over-discharge and over-current.

And the DW01 which seems to do exactly the same thing only for a single cell... which this is. This leads me to believe that the battery board is used in multiple batteries, you'd probably find the same board in 40% of li-po batteries in China.

Well That Was Weird 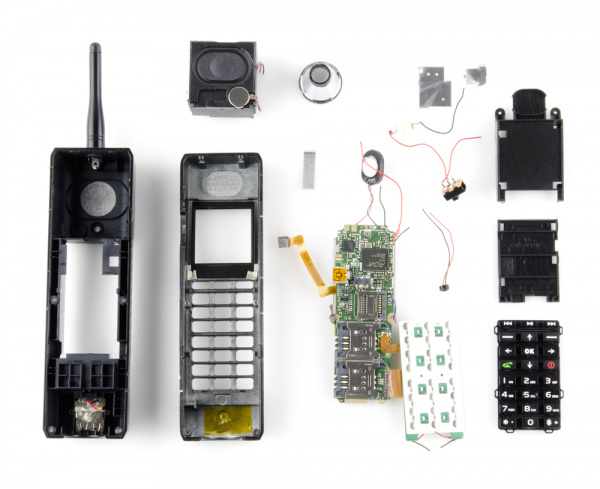 So there you have it. The X900 is a cheap quad-band phone from China. It's made by a company called DDC, apparently from parts of other cell phones, and badged "Nokia." Literally half of the weight of the device is the faceplate and the battery is only a quarter of advertised capacity. But you know what?

It makes me feel like I could build a cellphone if I really wanted to. In fact, I may take the guts of this phone and turn it into a reasonably sized device. I went so far as to put an AT&T SIM card in the phone and it works fine! If all you need is a cellphone with no frills and the weight and shape of a Motorola brick phone... the X900 is for you.