The Pi Block breaks out and level shifts several GPIO pins from the Intel Edison. It presents them in the same configuration as a Raspberry Pi Model B. 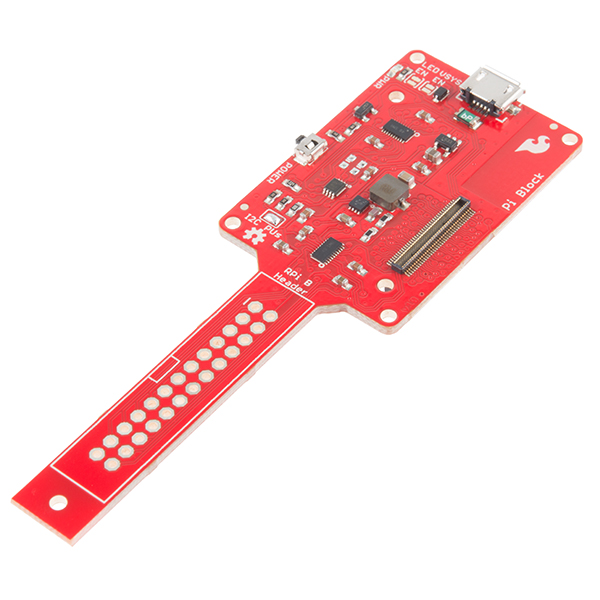 Other tutorials that may help you on your Edison adventure include: 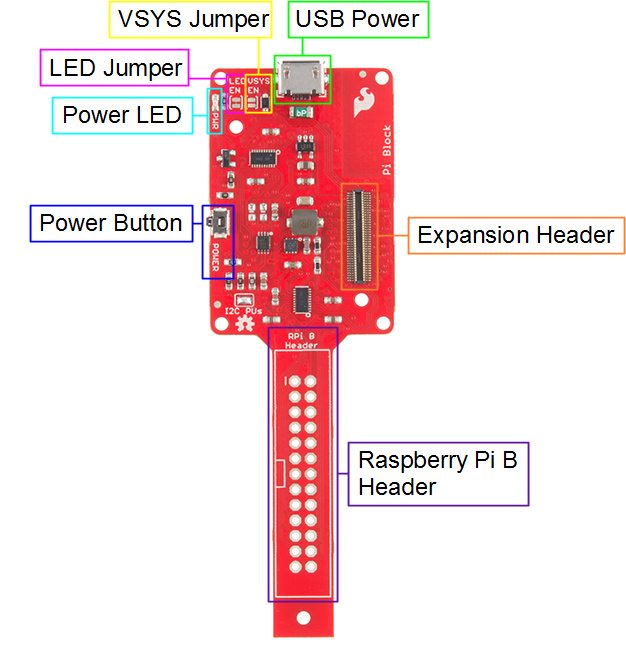 To use the Pi Block, attach an Intel® Edison to the back of the board, or add it to your current stack. Blocks can be stacked without hardware, but it leaves the expansion connectors unprotected from mechanical stress. 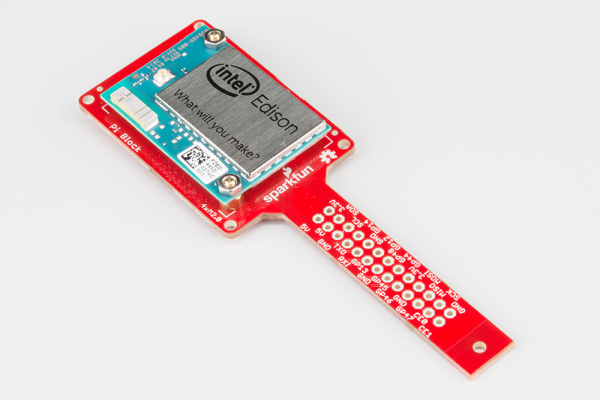 We have a nice Hardware Pack available that gives enough hardware to secure three blocks and an Edison. 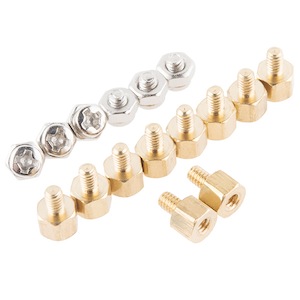 You can put headers on the Edison side, which gives you easy access to the pin labels. Note that this pinout is mirrored from the Raspberry Pi Model B pinout. 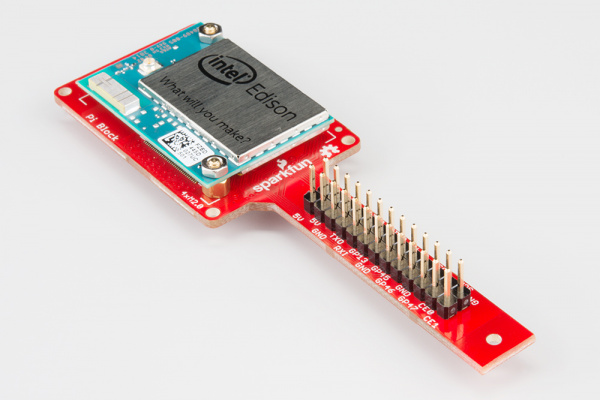 Headers on Edison side

Alternatively, you can populate the back side of the Pi Block with headers. This method gives the same pinout as a Raspberry Pi Model B. You could, in theory, swap the Edison in for your Raspberry Pi on an existing project, or use Raspberry Pi accessories (e.g. Pi Wedge). 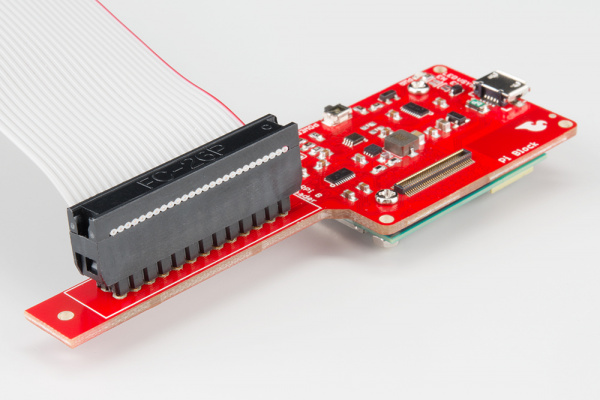 Or put headers on the back side of Pi Block

Using the Pi Block as an output device

If you want to use the Pi Block to control high power LEDs or relays, an external transistor or MOSFET will be required. It is possible to illuminate a small LED directly from the level shifter. It may not be as bright since the current output of the TXB0108 level converter is very low (~5ma). 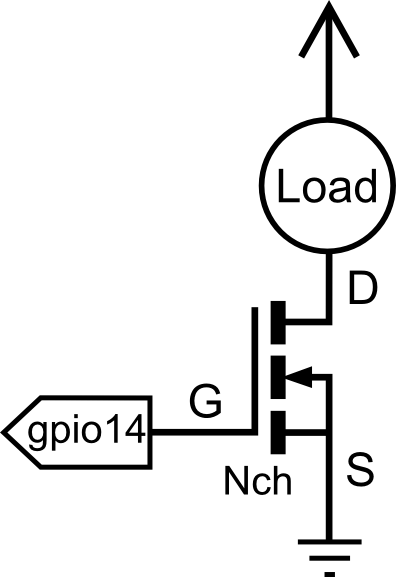 In the terminal, we will demonstrate how to activate and use a GPIO pin as an output.

First navigate to the GPIO directory on the Edison.

Select the GPIO pin to enable. In this case, we used GPIO 14, which is labeled "GP14" on the Pi Block.

Let's set the "direction" of the port to output

To confirm this, we will "cat" the value

You should see the "out" in the command line. Now the device is configured as an output. "value" is where the status of the pin is set, 1 for high, 0 for low.

Testing with a multi-meter, small led, or oscilloscope, you should see a "high" status (3.3V) present on gpio14.

Using the Pi Block as an input device

If you want the Pi Block to read switches, buttons, or other logic level inputs, you must pay attention to pull-up and pull-down resistors. The level converter on board is very weak. Here are two scenarios explained: 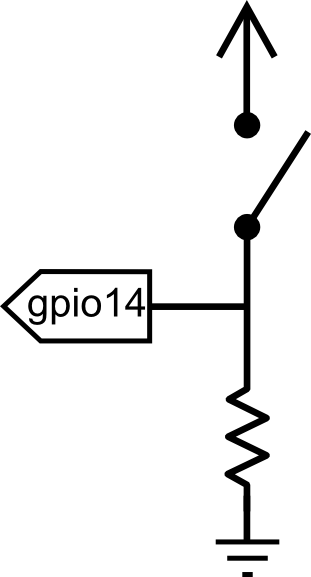 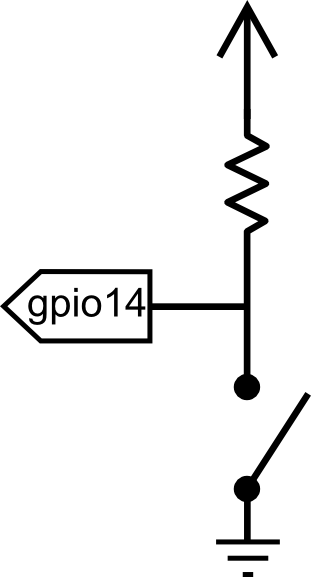 In the terminal, we will demonstrate how to activate and use a GPIO pin as an input configured as an active high.

First, navigate to the GPIO directory on the Edison.

Select the GPIO pin to enable. In this case let us use GPIO 14.

Let's set the "direction" of the port to output.

To confirm this, we will "cat" the value.

You should see the "in" in the command line. Now the device is configured as an input. "value" is where the status of the pin is set, 1 for high, 0 for low. 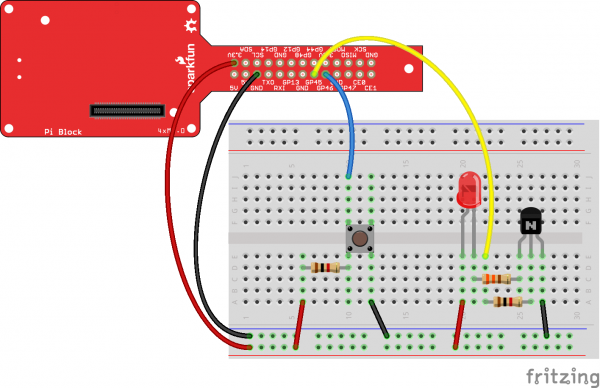 You might have noticed that we used GP46 in hardware and GPIO 32 in our example code. This is because the MRAA library uses a different number for the pins. If you would like to use MRAA to control hardware, figure out which GPIO pins you plan to use on the table below (labeled "Edison Pin") and then use the MRAA Number in software.

The available pins on the Pi Block have been highlighted in yellow in the table.

Check out these other Edison related tutorials from SparkFun:

A quick overview of the features of the 9 Degrees of Freedom Block.
Favorited Favorite 1

A quick overview of the features of the Battery Block.
Favorited Favorite 7

A quick overview of the features of the ADC Block.
Favorited Favorite 1

Using an LCD on the Edison

How to connect an LCD controlled by an ILI9341 driver to the Intel® Edison.
Favorited Favorite 5
Share
Use this URL to share: