Light Up Your 3D Printer's Bed

Are you 3D printing in a room at night with barely any light? That's the problem that I came across when inspecting prints at SparkFun during odd hours. The light source behind me created a shadow over the print bed making it hard to see what was going on. In this tutorial, we will be using a LED strip to light up the print bed on a LulzBot 3D printer! 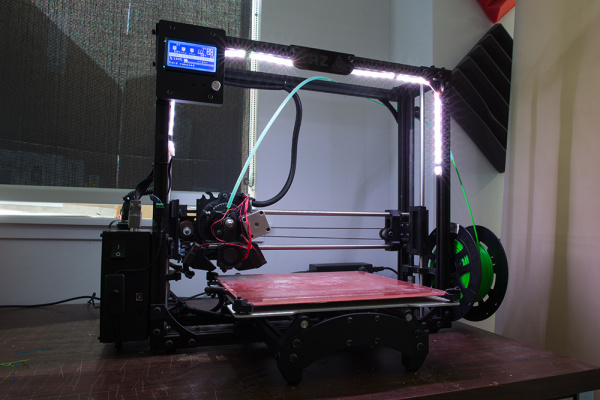 You will need a screw driver, wire strippers, and diagonal cutters.

In addition to the materials listed above, you will need:

⚡ Note: While the LED strip is labeled 12V, a 9V power supply was used so that the LEDs were not overwhelmingly bright. At 9V, it also did not dissipate as much heat.

Click the image for a closer look.
Note: When testing the non-addressable LED strip, the pin labeled "G" was actually blue and the "B" was actually green. Depending on the manufacturer, the label may vary. Try testing the LED strip out with a power supply to determine see if the letter represents the color.

Below is a hookup table that shows the connection between the female barrel jack adapter and non-addressable RGB LED strip.

Connecting and Modifying the LED Strip

Note: This tutorial was written with the Taz 5 3D printer. However, you can use this as a guide to attach any type of LED strip to your 3D printer! You will just need to adjust the length as necessary depending on the size of your 3D printer frame and the density of LEDs on your strip.

We will be attaching the LEDs to the top of the frame. Make sure that the LEDs and wires are not in the way of any moving parts. Determine the length that you need by holding the LED strip up against the 3D printer's frame. The length depends on the size of your printer's frame. For the Lulzbot TAZ 3D printers, about 16x segments of the LED strip was used. For the Lulzbot Mini, about 12x segments seemed to be sufficient. Each segment consists of 3x LEDs between the exposed copper pads.

Cut 4x segments off one end of the 1M non-addressable LED using the diagonal cutter. Relative to the 3D printer that I was using, I decided to remove the 4x segments from the right side of the LED strip.

Carefully strip extra wire insulation to expose more wire for the screw terminal. You may need to tin the tips of the wires by adding more solder. Then, insert the wires for R, G, and B, into barrel jack adapter's screw terminal labeled as "--". Then tighten the screw with a Phillips head screw driver. Repeat for the black wire labeled as 12V on the "+" side.

Pull gently to verify that the wires are secure in the socket.

Insulate the exposed end of the LED strip with hot glue.

Now would be a good time to check if the hardware was wired properly. Connect the power supply to a wall outlet. If the LEDs do not light up, flip the switch to the other side to see if the LED strip lights up.

Attach the LED strip flush against the top of the 3D printer's frame and ensure that the wires are not in the way of the printable area. Since we want to illuminate the print bed, aim the LEDs toward the printer. While we could use the 3M adhesive that is on the back of the LED strip's clear jacket, I wanted to ensure that the adhesive did not fail during a print. Instead, the wires were secured by using electrical tape and wrapping the strip against the frame. Depending on the width of the tape, you may want to cut it down to prevent the LEDs from being blocked. You could use zip ties as well.

Tape was added as necessary on the enclosure; left, top, and right side of the frame as shown in the image below. Feel free to mount the power switch to another location so that you do not accidentally turn the power off to your 3D printer.

Enjoy 3D Printing in the Light!

Insert the power supply into a wall outlet and flip the switch to power the lights when you need to check on your print!

Like all projects, you can always make it better and build upon the design. Here are few ideas to make it even more impressive by adding effects or interactive!

Need some inspiration for your next project? Check out some of these related tutorials for ideas:

Make bright, colorful displays using the 32x16, 32x32, and 32x64 RGB LED matrix panels. This hookup guide shows how to hook up these panels and control them with an Arduino.
Favorited Favorite 11

We attempt to emulate a car seat to ease a baby to sleep.
Favorited Favorite 2

Make a Qwiic-enabled digital desk sign with a MicroMod SAMD51 Processor Board's USB Host and a USB keyboard!
Favorited Favorite 2
Share
Use this URL to share: