Here at SparkFun, we love gadgets and gizmos, just like our customers. And, like many of you, we find ourselves frustrated all too often by shallow reviews that focus on the "gee whiz!" factor of fancy new electronics without really taking the time to tear into the nitty gritty of how a device works. 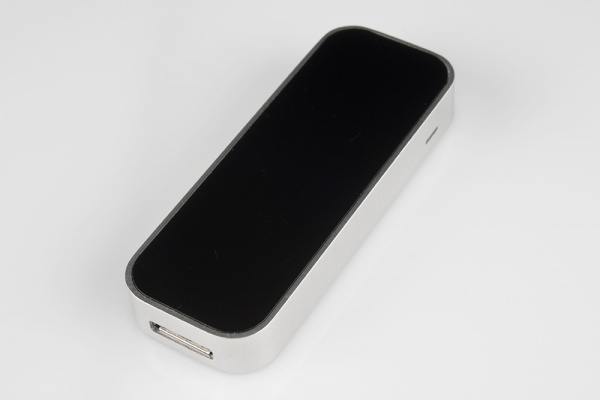 As the release of the Leap Motion draws nearer, we're all wondering, what does it do? Demos and shiny PR video aside, what's actually going on in there? And how?

One of our developers got his hands on one (through completely legitimate means; he registered as a developer and ordered it from the manufacturer), and when Nathan sent out an e-mail lamenting the fact that he didn't have one to tear apart, the reply was quick and awesome.

We shot a little video using the visualizer application that is included in the SDK to connect the reality of my hands with the virtuality of the output of the sensor. Check it out!

Now let's get into the teardown proper...

Seamless, glossy, and totally devoid of visible fasteners, the Leap Motion has the brushed-aluminum minimalist design which is the new "bent-sheet-metal-and-beige-plastic" aesthetic. The only notable external features are a tiny diffused plastic LED indicator window and data port on one end. 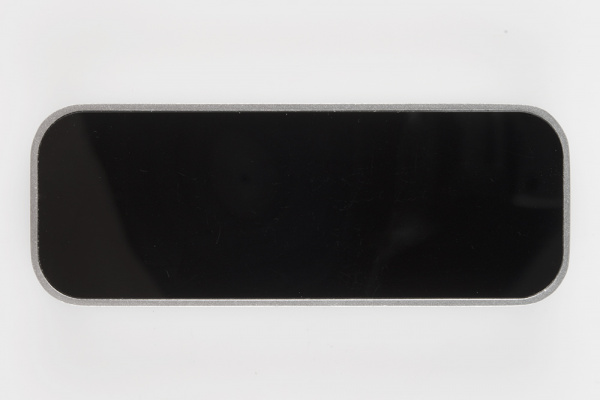 The top surface has the sort of coloration that suggests infrared transparency. It's mildly flexible to the touch, so we know it's plastic. It's also absolutely perfect for attracting and holding smudges, but the software will actually warn you that there's a smudge on the surface, and that's pretty dang cool. 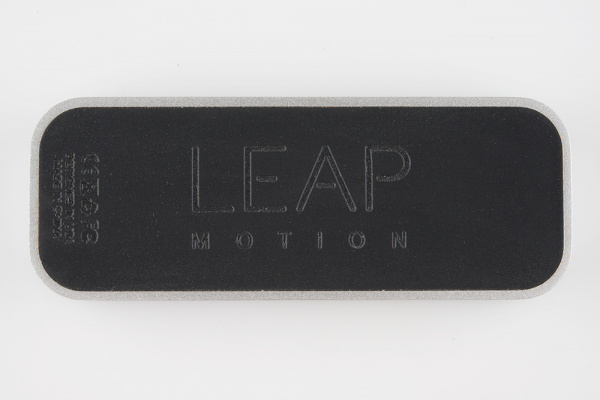 On the underside, there's a subtly embossed rubber sheet, with the typical flim-flam one expects on a consumer product- agency approvals, tiny "recyclable" and "don't trash me" symbols, "Made in China", etc etc. The rubber has a really nice grippy feeling to it- on a whim I put the device on a sheet of acrylic and tipped it up until it started to slide. That was at about 50° above horizontal; if my high school physics lab memories are correct, that's a coefficient of friction of about 1.2. Although it's not very heavy (about 32g, according to our postal scale), the rubber sheet on the bottom keeps in admirably still on my desk. 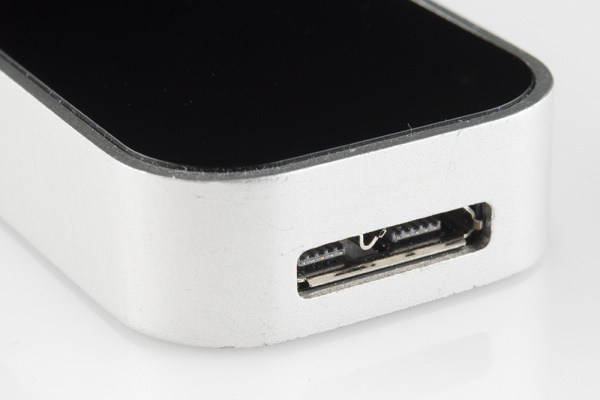 The Leap is tiny- 6.2mm thick, 25mm wide and 75mm long. At one end you'll find the data port- a USB 3.0 micro-B connector. While it can be used as a 3.0 device, I found it worked just fine with a standard USB micro-B connector, plugged into a USB 2.0 port. I'm guessing that chokes your framerate a bit, but I was still seeing framerates up near 200fps, which is pretty darn good. 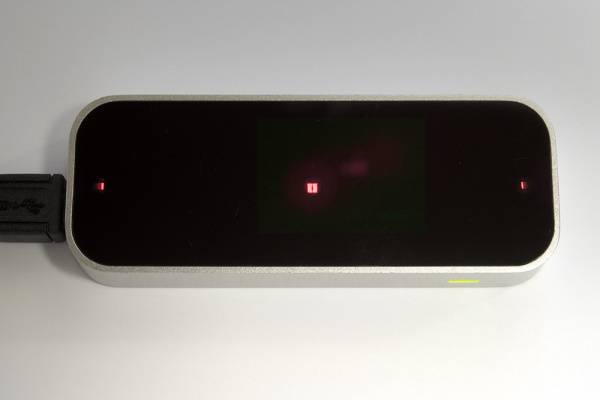 You can see here that there are three infrared LEDs inside, and that they're positioned to provide a nice, wide coverage area. We'll look at those more when we've gotten the cover off. A really cool feature that I noticed as I was playing around with the device is dynamic LED driving- as you move your hand closer to the sensor, the device will automatically dim the LEDs to prevent the imagers from becoming saturated and to keep the data quality high. It's visibly noticeable--the LEDs must be at a very near infrared wavelength (probably near or below 800nm), because they're visible, if barely, to the naked eye.

I stuck a meter in line with the unit to measure the current; once the Leap was in full swing, it was drawing about 320mA. Moving your hand towards it to cause it to dim the LEDs will reduce the current draw to about 200mA. It is warm to the touch, but not unpleasantly so--definitely not warm enough to melt hot glue, so that's an option for securing it to the robot I know you're already thinking of building with it.

As is so often the case these days, there's no obvious point of entry into the Leap. So, I assumed glue and started a-peelin'. 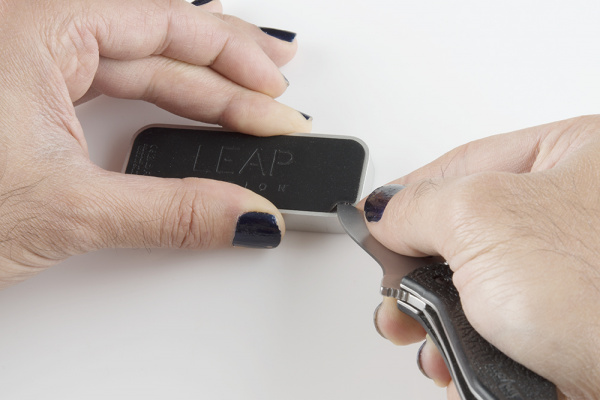 The rubber sheet on the bottom seemed like a great place to start; after all, it's not functional or terribly fragile. Armed with my trusty Kershaw Scallion, I slowly and carefully stripped the rubber sheet off the bottom. 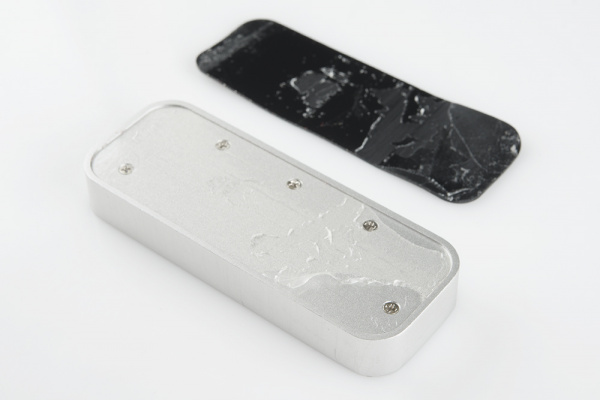 Beneath, I found five tiny screws. Bonus points to the Leap Motion folks for not using tamper-resistant screws- I really appreciate that! A Philips 0 screwdriver took the screws right out, and that didn't do squat as far as improving access to more innards was concerned. We'll see why that is in a bit.

I briefly entertained the fantasy that the guts would pop out if I poked something into the screw hole and pushed; a bit of gentle prodding quickly disabused me of that notion. Without knowing exactly what I was poking I was disinclined to apply any real force...which brought me back to prying. 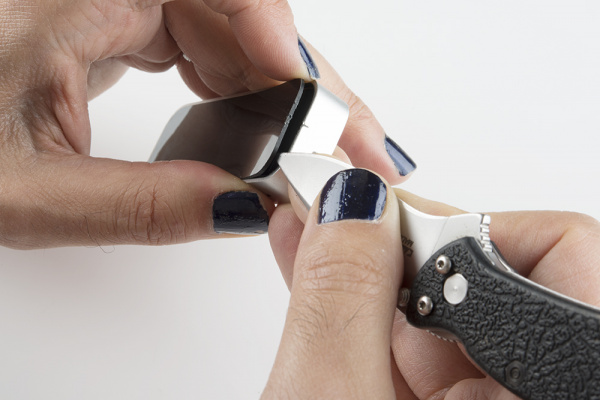 At first, I couldn't get enough of my knife-cum-spudger into the crack between the plastic and the case to make any real headway. I took a fine-tooth saw and cut a tiny notch in the case, and that was just enough to sneak the knife in and release some tension. After that, it was smooth sailing, except when I cracked the plastic a teeny, tiny bit. 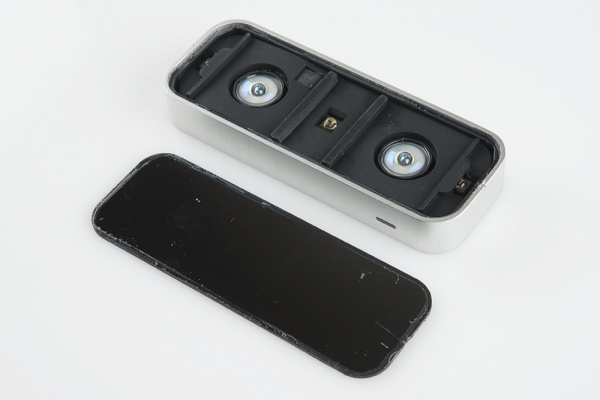 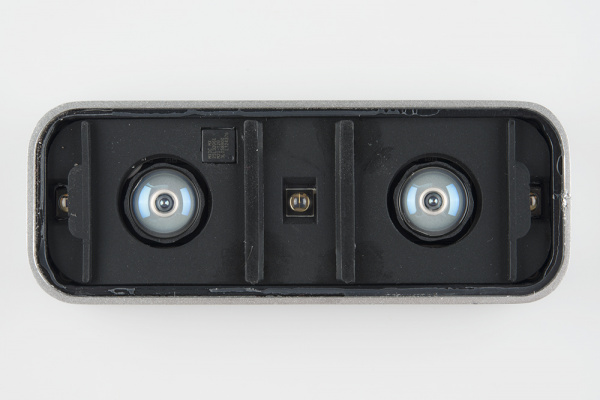 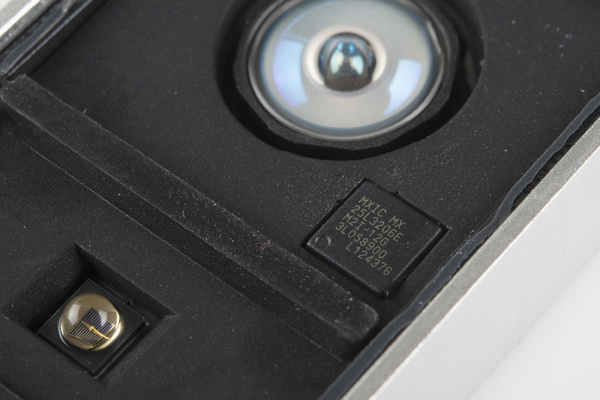 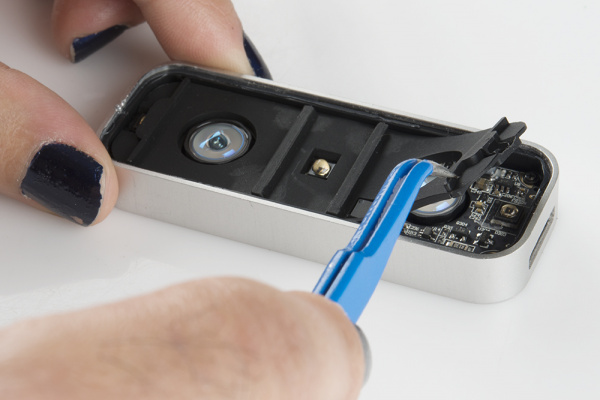 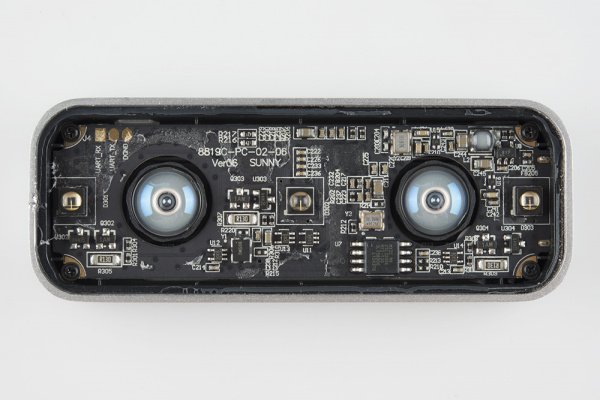 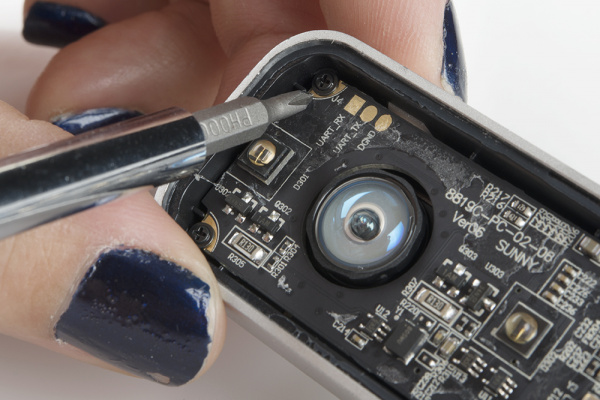 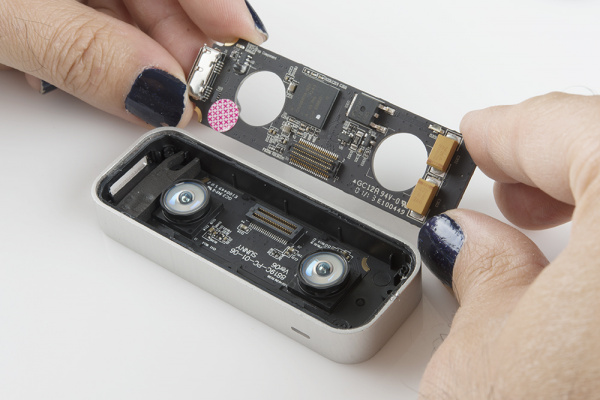 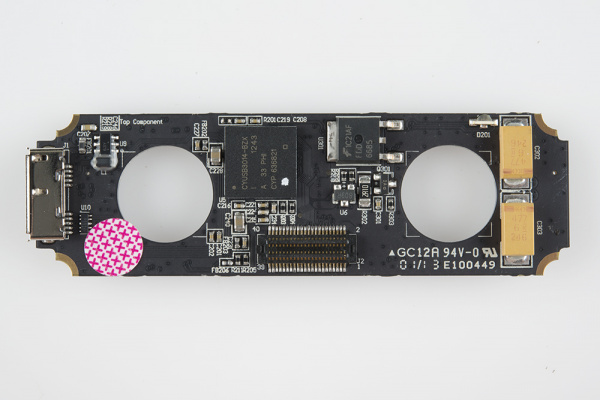 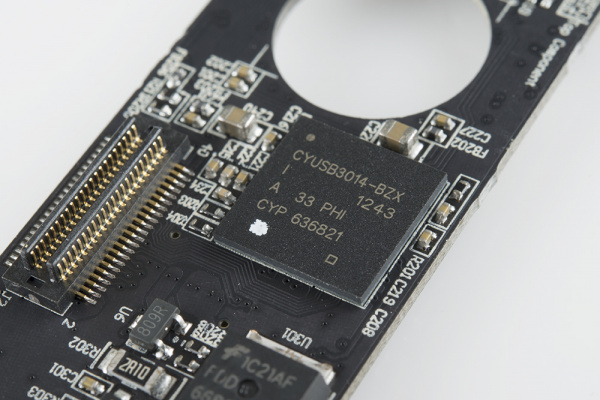 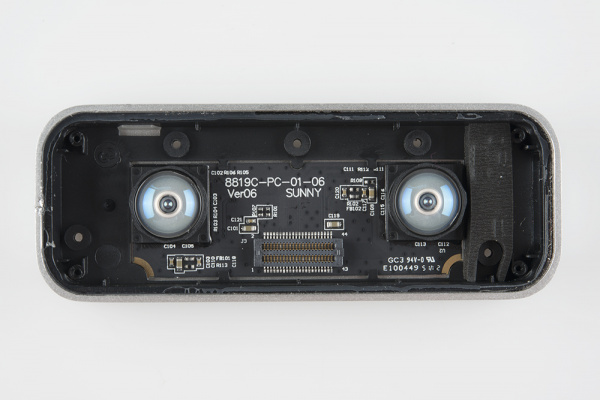 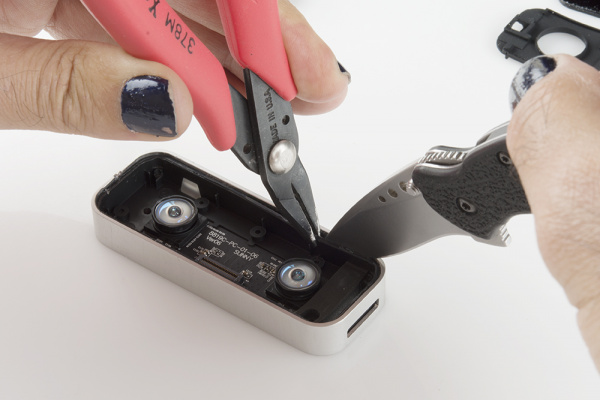 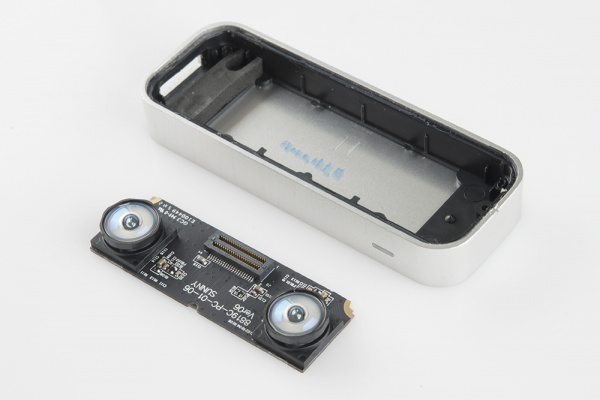 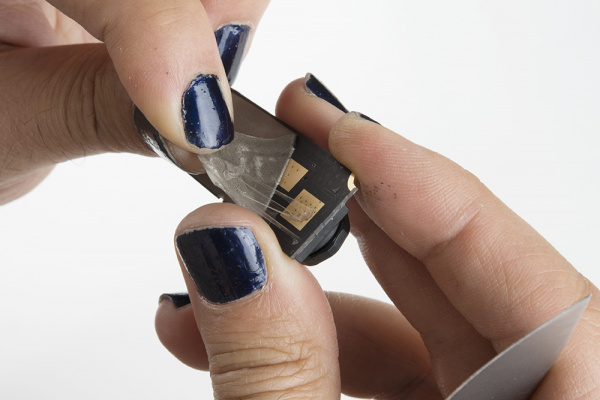 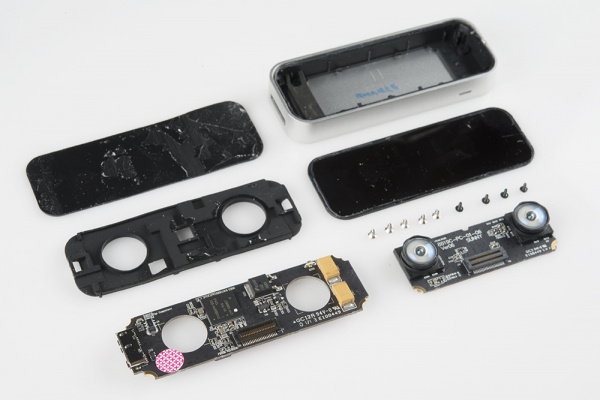 There you have it, folks--the Leap Motion in all its shattered glory. I plugged it in and tried it out while it was in pieces and it still works surprisingly well. That said, it works much better with the packaging in place.

I'm pretty impressed by the simplicity of it, but I can't say I'm all that surprised. As with the Google Glass Teardown, it's pretty clear that the magic is in the code, not the hardware. I'm also impressed by the thought that went into the design. Clearly, the Leap Motion folks have some skilled engineers putting some thought into how to make a durable, quality product.

For more disassembling goodness, check out these other SparkFun teardowns: