In early 2013, SparkFun made the decision to share all of the code and design files for our products via GitHub. While we've always striven to provide as much information on our products as possible (including complete source files; after all, we are all about Open Source!), in the past, that's been a very one-way channel. Our customers can see the source, download it, and use it as they please, but there's been no (easy) way for them to share changes with us (and, by extension, with the rest of the community).

By moving our product source to GitHub, we hope to change that. Obviously, the sheer number of products we have means that migrating them to GitHub is a slow process; in fact, we're not really trying to get all of our older products moved over at all. New products (those we design in house, anyway) will always launch with a GitHub repo containing at a minimum the source files for the product and most likely containing example code, getting started information, and a (curated, but open) wiki that can be used to exchange information with other users about the product.

Git is a source control package originally developed by Linus Torvalds for tracking changes during development of the Linux kernel. It's intended to make collaboration on projects easier by allowing locally stored repositories to be synchronized against a remotely stored master copy.

As is so often the case, the choice of source control package tends to be a deeply personal and subjective matter. We chose git (and GitHub) because they offer good support for all the tools we use at a reasonable price and are free for our customers to use to interact with us.

So what's GitHub, then?

GitHub is, at it's most basic, a web-based collaboration tool based on the git source control package. It allows multiple users to access git projects (called "repositories"), track changes, manage revisions, and merge with each other's different version.

The demarcation between git and GitHub can be fuzzy at times, until you get used to the tools. In general, things happening on the command line are using the git tool, and GitHub interactions will be done through the web page interface.

This tutorial isn't meant to get you up to speed on how to use git, in general- it's really just a step-by-step guide to show you how to make a change in a SparkFun repository and share that change with us. If you want to learn more about git and GitHub in general, we've got a great tutorial about GitHub. Git is a phenomenal tool, even if you're not collaborating. Once you get the hang of it, it's super easy to use and extremely powerful. 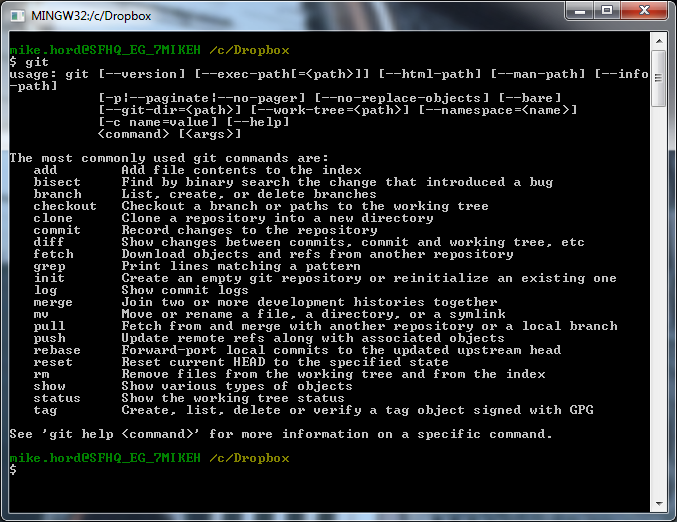 Now that we've gotten our client installed, we need to grab the repository that we want to make our changes on. We'll use the repository for the other GitHub tutorial for this example.

The first step is to fork the repository from SparkFun's account to your own. While there are other ways to take a copy of the repository and work with it, forking is the preferred method, because it makes it easier to submit pull requests (which notify the original owner that you have changes that you'd like considered for inclusion) later. 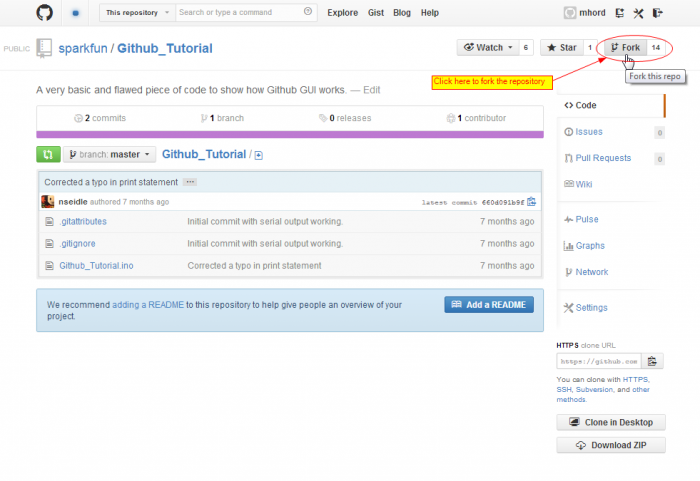 Once you're on the repository page, look for the "Fork this repo" button. You can see it in the image above; forking is core functionality of GitHub, so, even if the interface has changed slightly, you should be able to find it. Click the button and you'll see something like this: 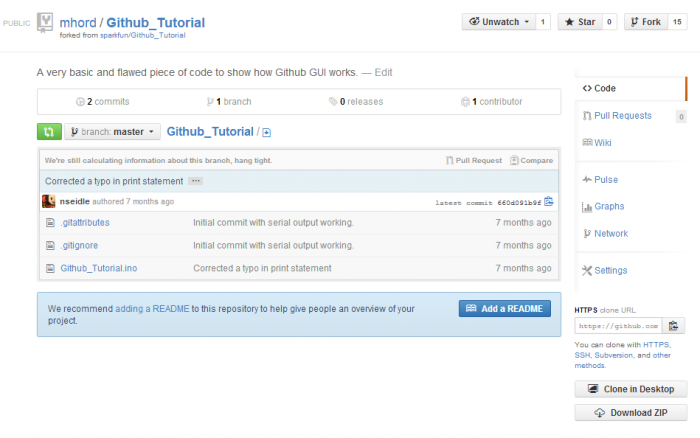 Now we need to make a local copy. While you can edit simple text files directly on GitHub, it's reasonable to assume most of your work will be done on a local terminal. Pick a location to store the files that you'll be working with (I store mine in a folder called "Projects" in my DropBox folder; git plays very well with DropBox!). Here's a sequence of commands to get those files from GitHub to your local computer and store them in a directory of your choosing: 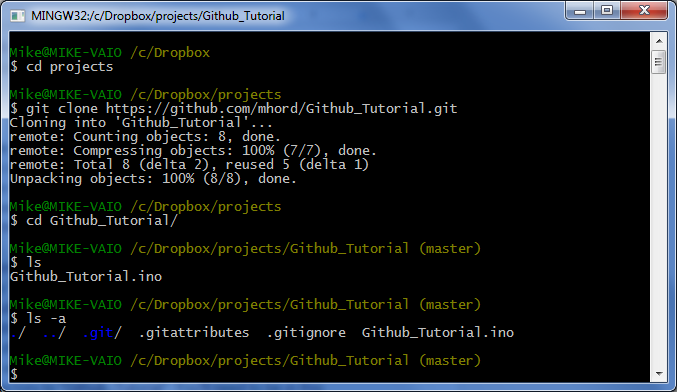 Let's take the commands here one at a time:

The .git directory contains all the "under-the-hood" stuff git needs to work its magic. Never, ever mess with it. .gitattributes contains some bookkeeping information telling git how to deal with certain file types; you don't really need to worry about it now, as it's not something you'll be modifying and is not found in all repositories. .gitignore is a text file telling git which files it should skip when committing changes. A good example of files that you might want to exclude are .o files when building a software project, or the .b#x and .s#x files that EAGLE creates as back-ups when you're editing board layouts or schematics.

Other files should be pretty self-explanatory--they're the "meat", the stuff you're really interested in editing.

Now that you've got a local copy and a copy on your GitHub account, there are four things that you'll need to know how to do in order to collaborate with SparkFun:

The first step in getting a change back to us is to commit it to your local repository. Look at this sequence of commands: 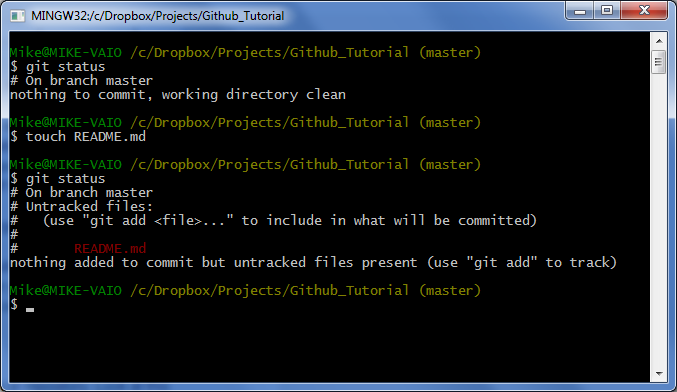 Again, one command at a time: 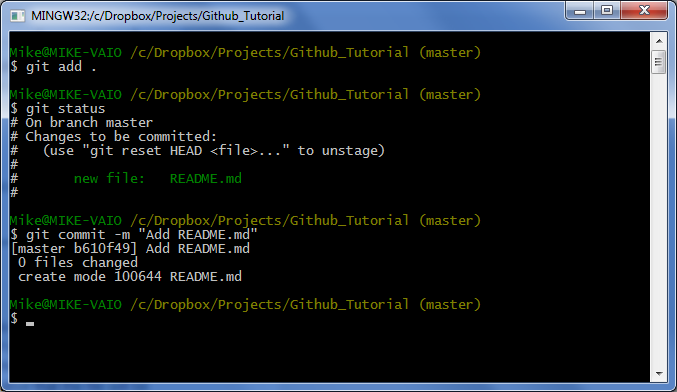 Pushing sends your changes up to GitHub, so they can be shared with the rest of the world. It also serves as a hedge against data loss. 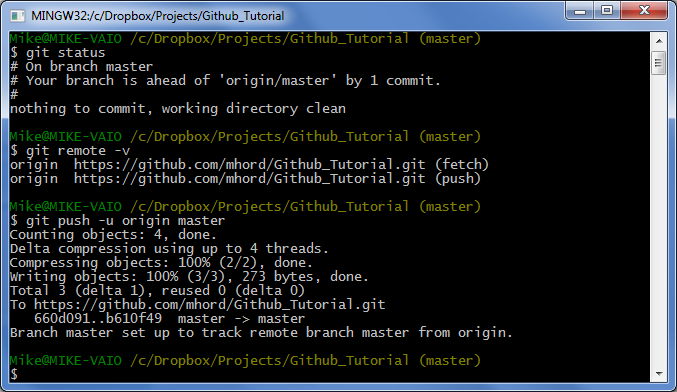 Pulling is the opposite of pushing--it retrieves changes from the remote location and applies them to your local repository. You probably won't do it that much; it's more useful in a group environment where more than one person is submitting changes to a single repository. 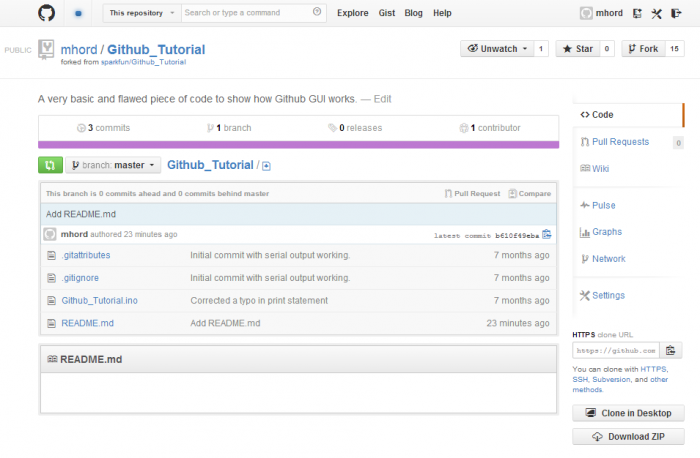 Visit the repository page again; you'll see that, since we pushed it back to GitHub, the README.md file is now in the file list. We can change the text in that file right on GitHub, then pull the change back down to our local repository. Start by clicking the file name link. That'll give you this page:

Since we didn't put anything in the file after we created it, there's nothing on the page. You can add something to the file by clicking the "Edit" button: 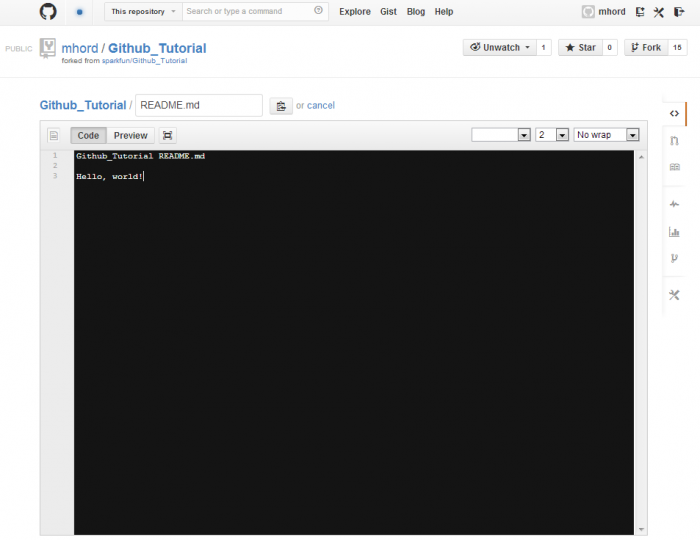 Now that you've made a change on the server which is not reflected in your local repository, we'll need to pull it down. 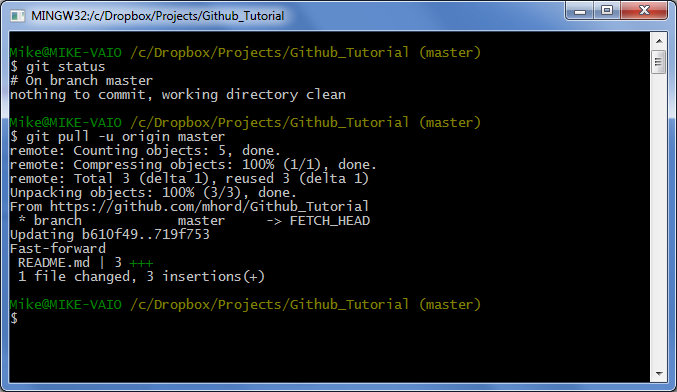 At this point, our local repository is in sync with our GitHub repository. But what about the original repository? What if something has changed there, and we want to bring those changes into our copy (both local and on GitHub)?

Syncing with the Original Repository

Syncing is the process of getting changes from the original remote repository, the one you forked from in the first place, and bringing them into your local repository so that you can ensure that you're making changes on the most up-to-date version of the original. Since you don't have access to change the directory on the SparkFun GitHub page, like I do, you'll have to just follow along--without any changes to the original repository, a sync is meaningless.

I made a small change to one of the files in the repository, so now we've got a fairly common scenario: most of the repository matches, but I have a new file I want to send to SparkFun, and SparkFun has some changes that I need to include. 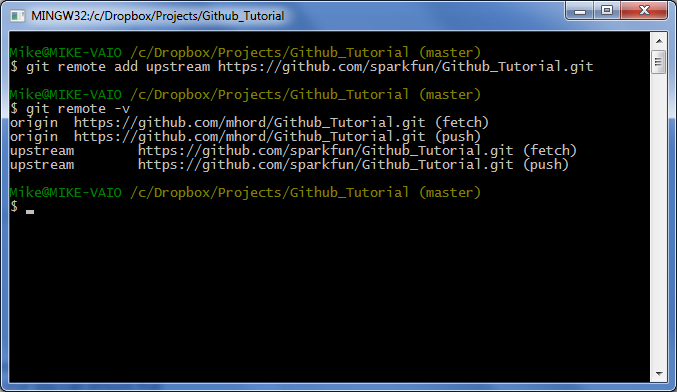 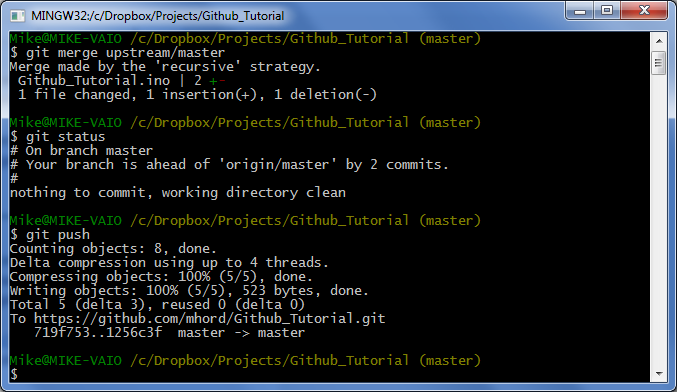 At this point, you have all the tools and knowledge you need to fork a repository, make and commit changes to its contents, keep it up-to-date with SparkFun's master copy, and push it to GitHub. Only one thing remains: submitting a pull request, to ask SparkFun to include your changes in our master repository.

The term "pull request" is a little confusing to some people. After all, aren't I asking to push files to your repository? In fact, no, you're requesting the master repository's owner to pull files from your repository. While the difference seems academic, it's a good one to remember: you are actively requesting someone else to add something to their workflow, so don't expect an instant response.

As I mentioned above, a pull request, even a very important and well-structured one, is asking someone else to do work. To make it more likely that your pull request will be honored, here are some things you can do to make that work as easy as possible for the person at the receiving end:

We're in a good position now to walk through a pull request: we've got changes in our repository that we want to send the SparkFun repository. 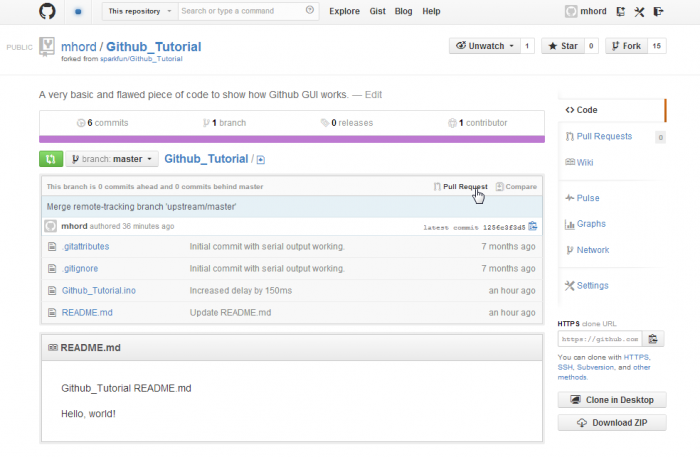 Click the "Pull request" button. Again, the interface may have changed, but the button will still be there, somewhere. 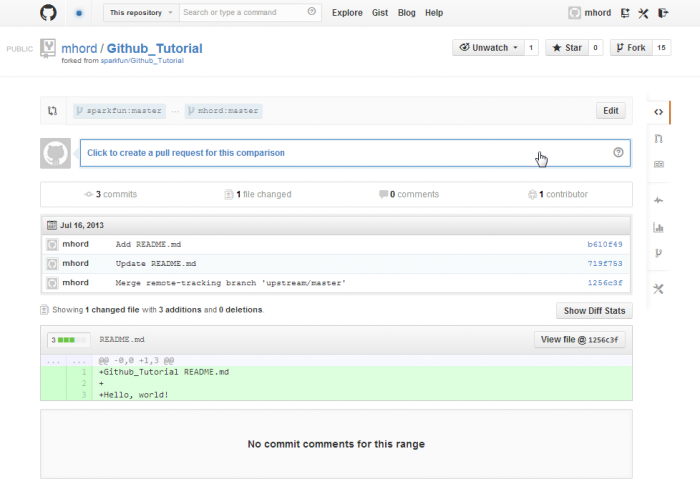 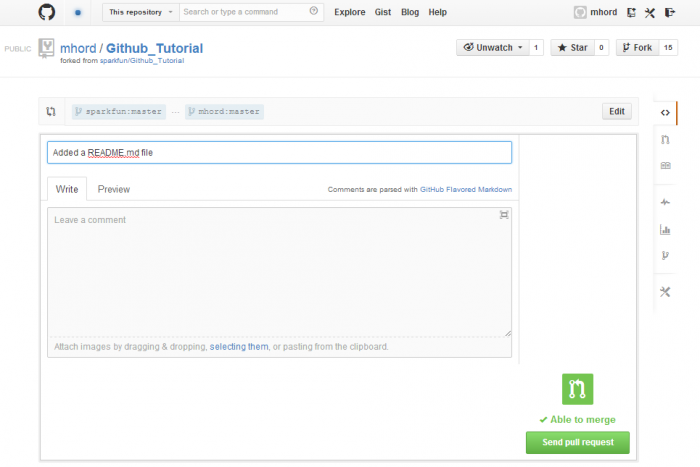 Put in a title, and a description. Be thorough. Your chances of having your pull request accepted are greatly increased if the icon in the lower right indicates that the pull can be automatically merged.

Thanks for taking the time to contribute!

Git and GitHub are incredibly powerful tools which are gaining widespread momentum in the open source hardware community. If you're interested in learning more about them, here are some resources you can turn to: