Below, is a basic drawing of the board dimensions and component layout for the SparkFun ProDriver. For more detailed measurements, users should download and open the Eagle files from the GitHub repository or from the Documents tab on the product page. 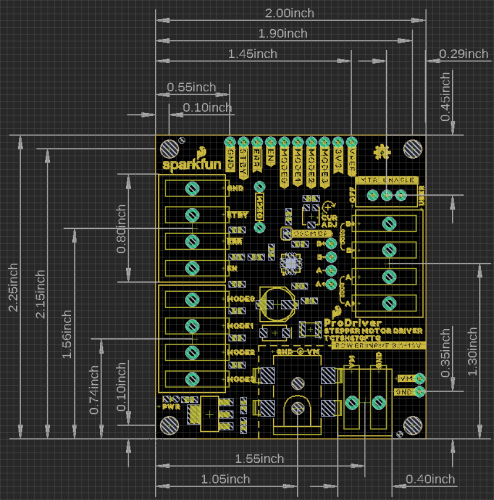 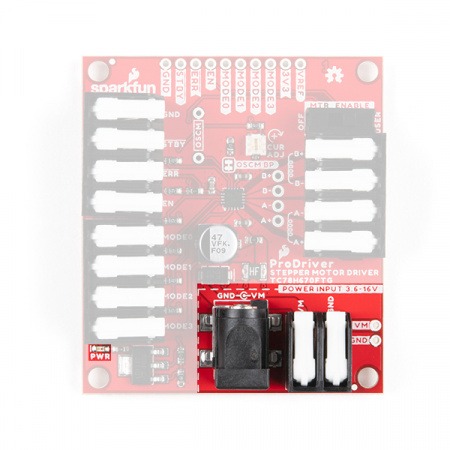 The available power connections and status LED on the ProDriver. (Click to enlarge)

Users opting to use the DC barrel jack may find some of these accessories useful:

Do you fear that your power may not be "far reaching" enough? How would another 6' work for you? Okay, so it doesn't sound ve…

We use barrel jacks a lot around here and sometimes we need to pop a switch into the mix. That usually means hacking up a per…

Do you fear that your power may not be "far reaching" enough? How would another 3' work for you? Okay, so it doesn't sound ve…

A power LED status indicator is also provided on the ProDriver. The LED turns on once the motor power supply is connected and the attached voltage regulator outputs 3.3V. The LED can be disabled by cutting the LED jumper. 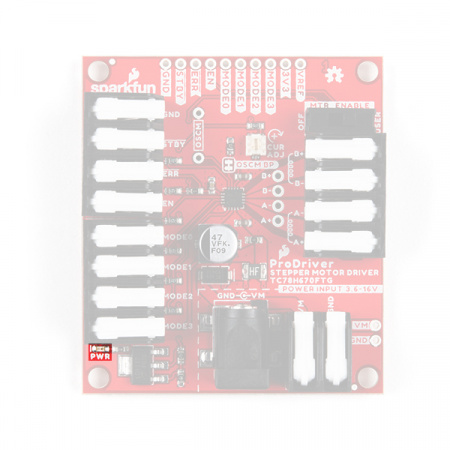 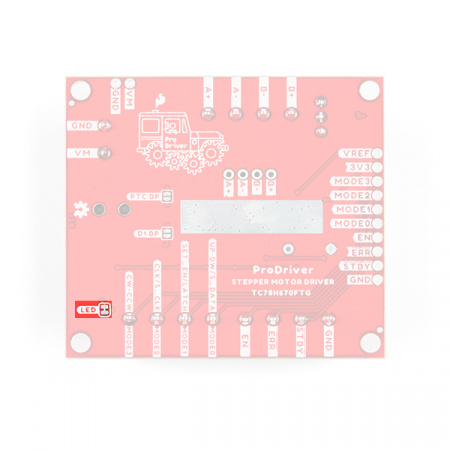 The power LED and LED jumper on the ProDriver. (Click to enlarge)

A 3.3V PTH connection is broken out amongst the other pin connections. It is connected to the 3.3V output of the LM117 voltage regulator, which is powered by the motor power supply input. 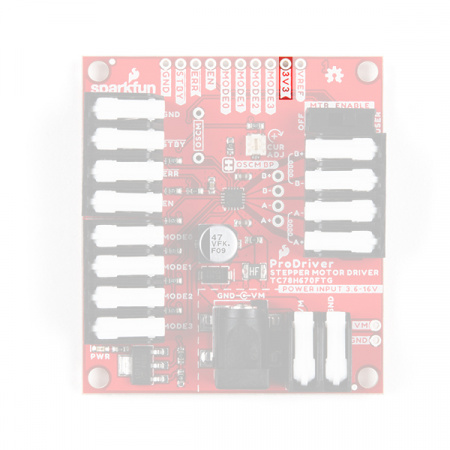 The 3V3 PTH pin on the ProDriver. (Click to enlarge)

The ProDriver includes a safety features to protect the board and power supply. There is a protection diode to prevent reverse current and a thermal fuse to prevent current from being overdrawn.

⚡ Note: We have provided bypass jumpers for more advance users to circumvent these safety features; however, we recommend NOT modifying them, unless you absolutely know what you are doing. Users can easily damage or destroy their ProDriver and/or power supply by modifying the jumpers. 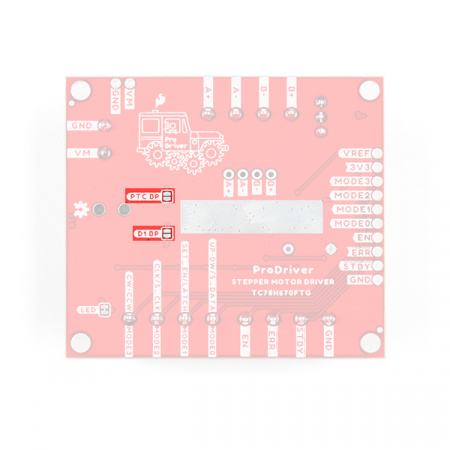 The D1 BP and PTC BP jumpers on the ProDriver. (Click to enlarge)

The ProDriver was designed with latch pins to provide a completely solderless connection to get users up and running faster. We have also broken out those same connections with PTH points, for a more permanent installation. (*These latch pins are great! Just as secure as a screw pin terminal, but without the hassel.) 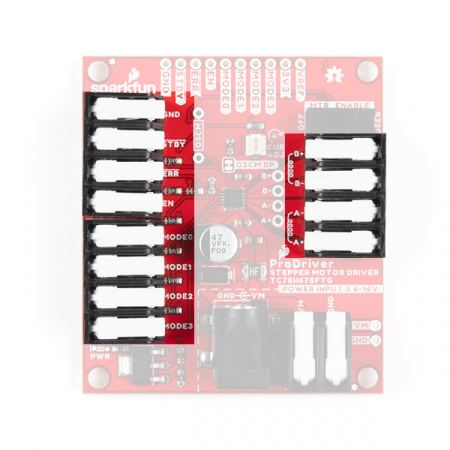 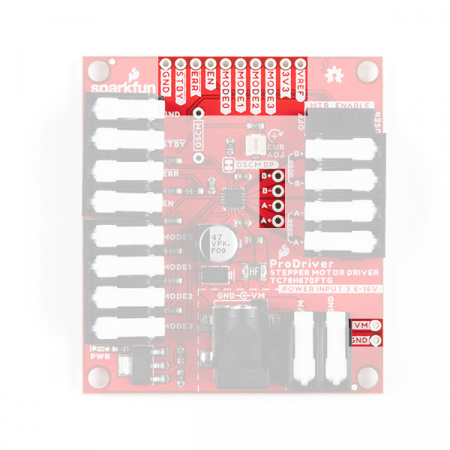 The control and motor connections on the ProDriver. (Click to enlarge)

More details on these pins are laid out in the following sections below, excluding the power pins. Details for the 3V3 and VM pins are described in the power section above.

When working with the latch terminals, there are two things to keep in mind. These should be fairly obvious, once you take a closer look at the jaws or clamping mechanism: 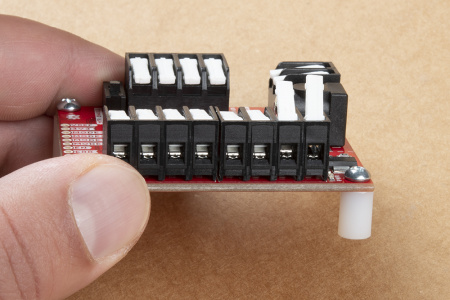 The input control pins are used to interface directly with the TC78H670FTG motor driver. The ProDriver was designed with latch pins to provide a completely solderless connection to get users up and running faster. We have also broken out those same connections with PTH, for a more permanent installation. (*These latch pins are great! Just as secure as a screw pin terminal, but without the hassel.) 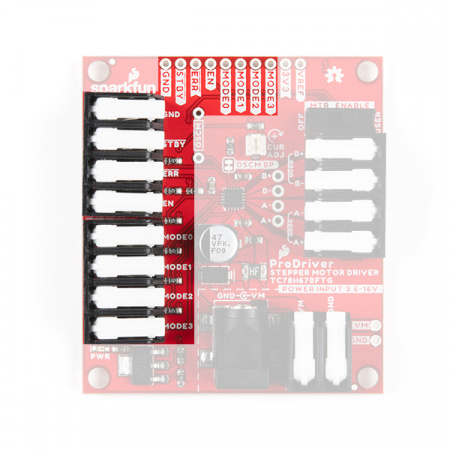 The input control connections on the ProDriver. (Click to enlarge)

For more details on the functions of the pins listed below, check out the datasheet for the TC78H670FTG.

⚡ Note: From the datasheet, the TC78H670FTG is compatible with 3.3 and 5V logic levels on the control pins. The electrical specifications for the input voltage listed at a 5.5V maximum, with a 1.5 and 0.7V threshold on the high and low signals respectively. For more details, check out page 31 of the datasheet and the schematic for the ProDriver.

The output channel pins are used to drive the coils of the stepper motor. The paired outputs are connected to the two H-Bridges of the motor driver. 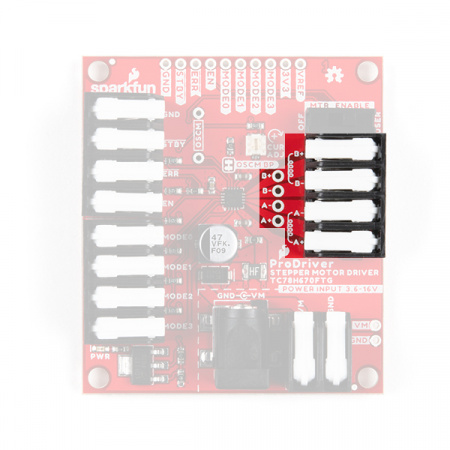 The output motor driver channels on the ProDriver. (Click to enlarge)
Useful Resources on Stepper Motors:

For basic information on stepper motors, users should check out our Motors and Selecting the Right One tutorial. Additionally, we have included a few YouTube videos, below, that help explain the theory of the stepping functionality behind stepper motors. Users who have stepper motors with more than four wires, may also find this article enlightening.

The ProDriver is driven by the Toshiba TC78H670FTG stepper motor driver IC. The TC78H670FTG is a 2-phase stepping motor driver, intended for bipolar stepper motors. The chip features two H-Bridge motor drivers that provide users with step size resolutions ranging from full steps, half steps, and micro-stepping down to a 1/128 of a step. The TC78H670FTG can be controlled with the standard clock-in stepping, but it also has an additional option for serial communication. 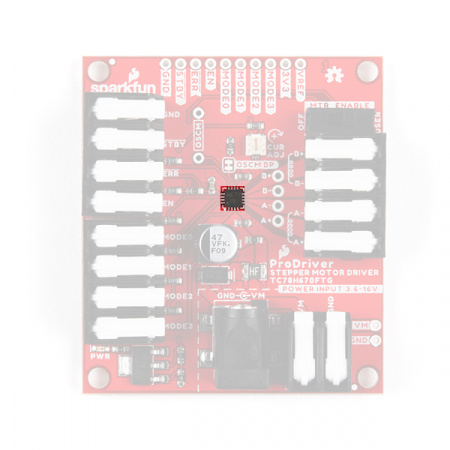 The Toshiba TC78H670FTG stepper motor driver IC on the ProDriver. (Click to enlarge)

Some of the advantages to the TC78H670FTG over a simple H-Bridge, include a standby function, selectable mixed decay, error detect flag output, clock- in stepping or serial communication control, software control of the current output, and a minimal parts bill of matierals (BOM). The serial command method is especially unique because it allows users to precisely control the phase, torque, current limit and mixed decay ratio of each coil during the motor operation. Additionally, while in most stepper motor driver ICs, an external trimpot is required to set the current limit; however, with the ProDriver, a simple serial command can be utilized to precisely adjust the current limit.

On the ProDriver the EN and ERR pins are broken out separately; however, these connections are tied to the same pin on the TC78H670FTG, which operates as a control input and output for error flags. A typical application of the EN/ERR pin with a microcontroller is displayed below.

The EN/ERR pin application from the datasheet. (Click to enlarge)

This duality allows the TC78H670FTG to give users control of the power to the motor drive channels; while also providing autonomous functionality to disable its own power, when an error flag is triggered and simultaneously, provide an output indicator on the same pin. 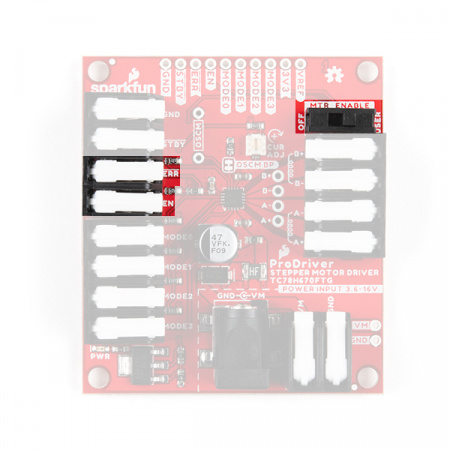 The motor enable control switch and the connected EN and ERR pins. (Click to enlarge)

The EN pin functionality from the datasheet. (Click to enlarge)
Note: Users should avoiding motor operation during any VM power-on and power-off cycles by setting the EN pin low to disable the motor channel outputs. The EN pin can be set high after the power supply reaches the target voltage and becomes stable.

We have broken out EN pin control to a DPST switch. The switch allows users to easily disable power to the motor channels without connecting additional hardware. 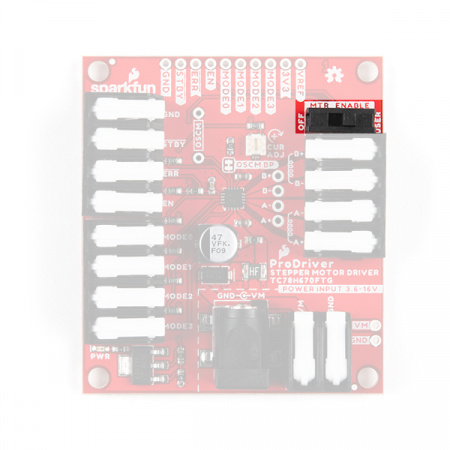 The motor enable control switch connected to the EN pin. (Click to enlarge)

The TC78H670FTG has a built-in functionality to detect thermal shutdown (TSD), over current (ISD), or motor load open (OPD) connection issues. When these errors are triggered, the ERR pin is pulled low. In a normal operating status, the level of ERR pin is equal to the EN control voltage from outside. After the error is triggered, the error flag can be released by reconnecting the VM power or by setting the device to standby.

The configuration settings for the control methods, when the standby pin is set HIGH. Pulled from the datasheet. (Click to enlarge)

This method is unique to the TC78H670FTG Toshiba motor driver. The control logic allows users to manipulate registers through serial communication, which provide control over:

(*For more details on the configuration options for the available registers, refer to Section 9 of the datasheet.)

This is a standard method for controlling most stepper motor drivers. By default, the ProDriver is configured for clock-in stepping in the fixed mode with a step resolution of 1/128 of a step. 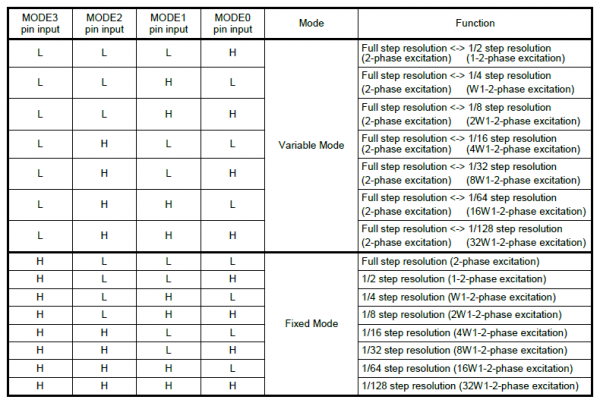 The step resolution configuration settings for the clock-in method, from the datasheet. (Click to enlarge)

Once clock-in stepping and the step resolution are configured together. The TC78H670FTG awaits for the up-edge of the clock (CLK) signal, for the MODE2 pin, to before it shifts the motor’s electrical angle per step. The MODE3 pin, controls the clockwise/counter-clockwise (CW-CCW) rotation direction of the motor for clock-in stepping.

The MODE3 (CLK) and MODE2 (CW-CCW) pin functionality for clock-in stepping, from the datasheet. (Click to enlarge)

The MODE1 (SET_EN) and MODE0 (UP-DW) pin functionality for transitioning the step size resolution during clock-in stepping, from the datasheet. (Click to enlarge)

The maximum drive current for the ProDriver is limited to 2A (max). However, the peak output current can be controlled with two different methods. 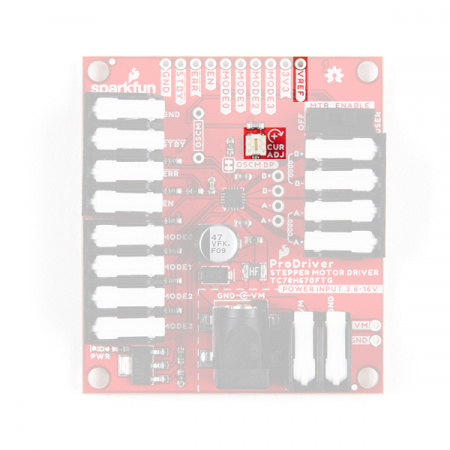 The potentiometer and VREF pin that can be utilized to control the maximum drive current.

For the hardware control, the maximum drive current can be calculated with the following equation:

Chopping is a technique that is used to control the average current per phase, by rapidly switching a relatively high output voltage to the motor coils, on and off. This technique improves the current rise time in the motor and improves the torque at high speeds, while maintaining a high efficiency in the constant current drive.

A table with the resistor values used to modify the OSCM oscillation and chopping frequency, from the datasheet. (Click to enlarge)

On the TC78H670FTG, the OSCM oscillation frequency (fOSCM) and chopping frequency (fchop) are adjusted with an external resistor (ROSC), connected to the OSCM pin. By default, a 47 kΩ resistor is utilized. However, users can modify the ROSC resistor value by cuttin the OSCM BP jumper and soldering a resistor to the provided OSCM PTH connections. 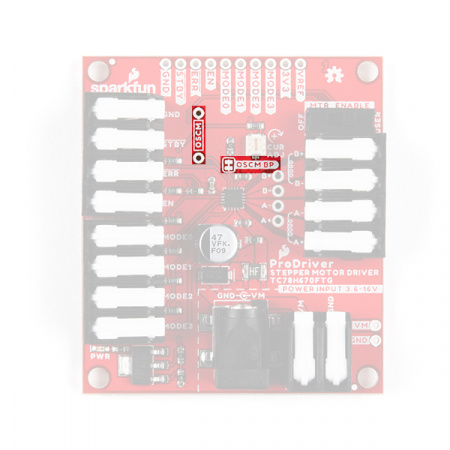 The OSCM BP jumoer and OSCM PTH points on the ProDriver. (Click to enlarge)

There is a thermal ground plane on the bottom of the board available for users to attach a heat sink(s) with some thermal tape, if necessary. However, after several tests by the engineer for this product, we have determined that for most use cases, a heat sink probably won't be necessary. 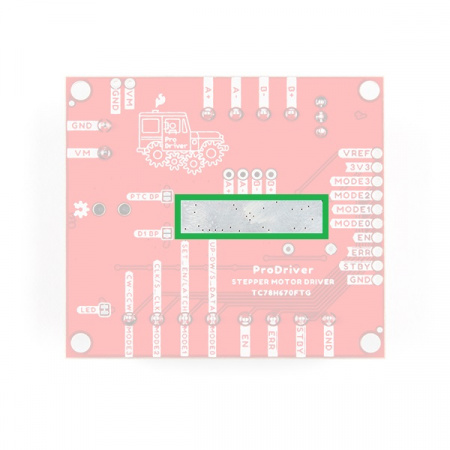